The Violation of Gonzi Supreme

I'm about to embark on a tale. A tale of violation. A violation of trust. A trust lost.......because of a violation.

So I'm on a company mandated business trip. (Gonzi is always working...even when I'm not). And it's the last day of my trip. My business concluded by Noon and my flight wasn't until later that evening. Why not go to a local mall and see the same exact stores that exist near my home? Am I right??

So there I am in the midst of my scroll. Watching people. Judging People. Hating being out in public. Such is the life of an anti socialite.

When I notice, from where I'm standing at about 10 o' clock....What can be only described as a little enclosure...a corral if you will....of masseuses. Complete with the ergo friendly massage chairs, lotions and all of that. Before I have time to retrain my eyes on my set path ahead, I connect eyes with a tiny little woman who may or may not have been Asian. I don't want to prejudge but judging by the fact that she couldn't speak English, I think it's fair to say she wasn't born in the area.

Anyhow, she runs over and anxiously gestures me over to her area. I happened to be tired physically after the traveling and sleeping on a mattress in a hotel. A mattress that probably had just been used for a hate fuck session between an old white racist and 400 pound African American woman named Dolores the week before.

I caved. Fine. I'll let this little lady work out some of the kinks before being on my merry way. She brings me into the corral where there is an Asian American man who takes my baseball cap and shopping bag. She points to the chair and I sit: 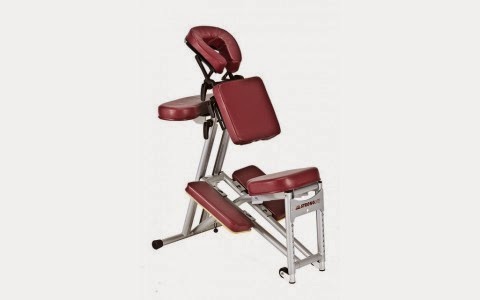 Where pain and stress go to die.....And shame and victimization are born

There I sit. Face down. Already feeling more relaxed before the massage begins. All aboard the relaxation train! After a few seconds, I feel her hands begin to rub my shoulders and get to work. I think:

As the massage continues, I think:

This is normal. Due to my large stature, masseuses generally use a lot of pressure, so no red flags yet.

"Wow..Wo..UGH..Wow...She sure is strong for such a small lady. Good for her! She probably never bugs her husband about opening jars for her and shit."

The pressure of the massage intensifies.

"Well I guess I'll be sore for a little while...stop being a bitch.."

Just as I'm talking myself into enjoying this massage...I hear a voice. A voice that has to be within a few inches of my head. It's in a foreign dialect...maybe Chinese...not sure....One thing I am sure of....is that it came from a Man.

I then hear a voice that is definitely a woman and definitely not as close as the man was....giggle.

I shout in my head:

"THAT DECEPTIVE LITTLE...OH SHI...AHH!!" My brain realizes what my heart is already been telling me...

"You're about to get man-handled, son!"

The male masseuse proceeds to apply more pressure to my back muscles...more than I've ever felt before.

At this point..we are about 3 minutes into a 20 min massage. The next 17 minutes involve my face getting mushed into a badly placed metal bar on my chin where the face holder is. Him twisting my arm like I'm under arrest. Punching the shit out of my legs. Before finally saying...

I had been deceived. I had been hoodwinked. Violated and then charged for the experience.

Let me be clear. The idea of a professional male masseuse giving me a massage doesn't bother me....especially while I'm fully clothed.

What bothers me is the fact that a little Asian Man who couldn't have weighed more than 135 pounds could make me (a 6'3 300 pound man) cry and shout in pain. He could have his way with me. And HE DID!

All I could do was take it.

The moral of the story is: When a masseuse half your size runs up to you in the mall, shout "RAPE!" and run the other way.

Posted by Gonzi Supreme at 3:00 PM