Digging through the Crates: Warren Zevon's 'Stand in the Fire: Live at the Roxy'

Digging through the Crates: Warren Zevon's 'Stand in the Fire: Live at the Roxy' 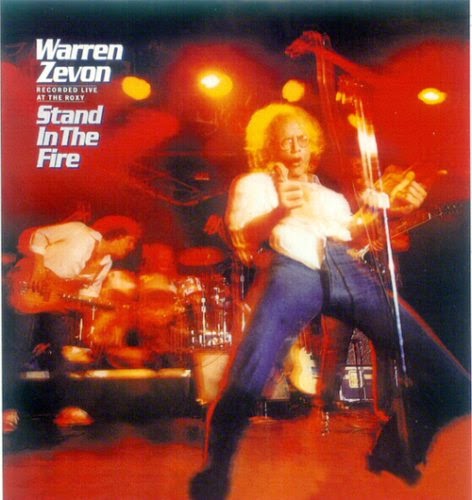 Beautiful Melodies Telling You Terrible Things Vol. The Ayatollah his his problems too 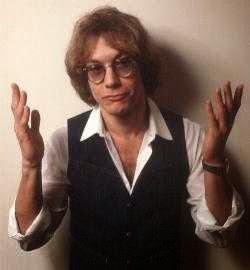 You notice there aren't many live records from more recent artists released these days? Sure, you get some, even occasionally brilliant releases like Wilco's Kicking Television, but the truth is if you glance over anyones greatest live releases of all time lists and you're not gonna see many recent records make it. Why is that? Well let's be honest, Miley Cyrus (to take one pathetic example) isn't going to make headlines on her tour except for one reason: making controversies regarding, say, her ass and another countries flag, or absolutely butchering a cover song. Truth is? Nobody wants a live album from Miley Cyrus, because all it would be is studio tracks with canned audience audio. Nobody gives a fuck about the music or content or what she has to say, it's just about what dumbass antic she'll come up with and how drunk you can get watching it. Remember when the Black Eyed Peas performed at the SuperBowl? Yeah, me neither, certainly didn't give me the drive to go see them live, just reminded me Fergie is the poster child for Butterface.

Which brings me to another issue, which is the actual lists people come up with of greatest live records of all time. If I have to see the Who's Live at Leeds on another list I'm gonna pull  Kurt Cobain and have my wife set me up as a suicide. I don't know about you, but hearing the Who drunkly sing their songs off key makes no interest to my ears. Yet Warren Zevon's absolutely fabulous, outright balls out first live affair, Stand in the Fire: Live at the Roxy is rarely, if ever, mentioned in such conversations. Hell, even the man himself forget he recorded the fucking thing…

At least Dave and Paul fondly remember Stand in the Fire

By the time of 1980, Zevon had released four records (if you count his equally often forgotten debut, Wanted Dead or Alive) and was an extremely talented and respected songwriter, though that respect came more from fellow musicians than the public itself. At the time he had two major singles under his belt, one being the mistaken as just a jaunty fun pop song, "Werewolves of London," and one of them being Linda Ronstadt's cover of "Poor, Poor, Pitiful Me" which was a nice hit for her. Ronstadt also did a nice version of his "Hasten Down the Wind," which on the extended remaster of this LP is not only featured but some great intro banter ("I was poor and strung out and screwed up when I wrote it, now I'm just screwed up…it's great to be alive") from Zevon precedes it. He was recently sober at the time (he referenced his friend/producer Jackson Browne's role in getting him into rehab with "I saw Jackson Browne walking slow down the avenue/You know his heart is perfect" in a "Werewolves of London" ad-lib on this LP), and this recent sobriety was to his wellbeing's supreme benefit, being the term rock n' roll was more representative of Zevon's personal life than his records. A classically trained pianist with a penchant for pop hooks and alarmingly bizarre lyrics, Zevon's voice and records were more of the country or blues rock variety than true rock n' roll. 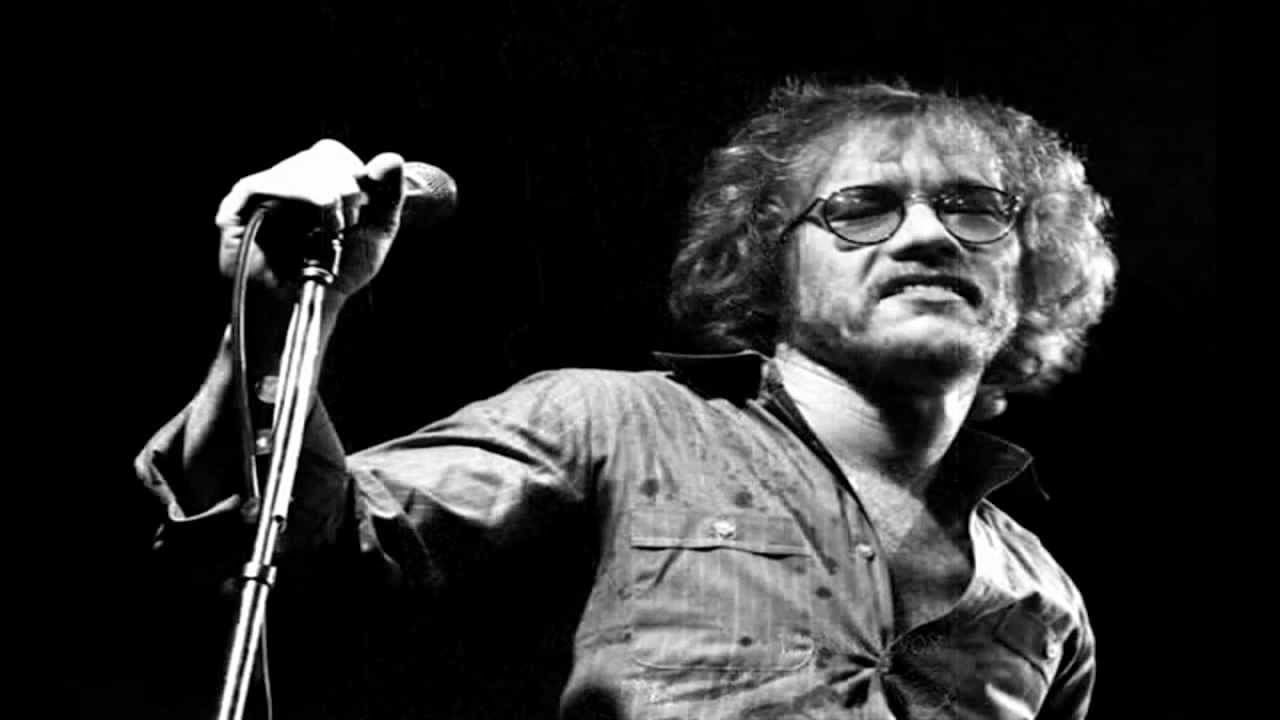 This all leads us to Zevon's "The Dog Ate the Part We Didn't Like Tour," which is represented here from recordings at his tenure in his adopted homeland of LA's legendary Roxy Theatre. The sober Zevon seemed fully dedicated to showcasing his hand and he could rock out with the best of them, and that they did. Zevon's voice sounds like he stayed up all night drinking while listening to Dylan/The Band's Before the Flood and is trying his best to match the mean spirited bellow of Dylan on that great in it's own grooves live records. Zevon is in great spirits throughout the set, often showing a great wit and changing up lyrics to playfully shout-out various Hollywood and music icons in the room. 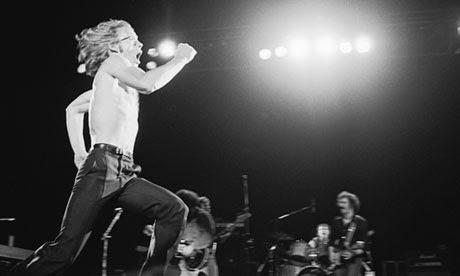 The records is loud and lively, and doesn't feel remixed or overdubbed and glossy like so many live rock records. This feels straight from the can, with loud bass, imperfect vocals and a thumping drum backbeat, like a good ol' fashioned bootleg you bought under the table. That's what I like about it best, it's loud and an earful, just like a real rock show, this record isn't lip sync bullshit more about theatrics than music, it's just plainly put one of the most exciting live records out there. "Werewolves of London" has all the vicious bite the original studio's lyrics had, but now the music matches it in all the ways it teased it could and the lyrics throw a few ad-libbed bones our way ("little old lady got mutilated late last night…Brian DePalma again!"). "Excitable Boy" now teeters off it's rockers a bit, much like the songs lead character,  while "Mohammed's Radio" sounds like the words are coming from a shell shocked solder of misfortune, with some ad-libs referencing the then-curent Iran hostage crisis, and it's tales of over-priced gasoline still relevant to us today. "I'll Sleep When I'm Dead" is no longer a singer finding himself in a suicide silouette but a defiant middle finger to those who say you can't live forever.

Though it's probably in "Lawyers, Guns and Money" that makes the defining statement concerning the show, and maybe even Warren's life itself: mid-way through he crackles through a walk away from the mic yell of "The shit has hit the fan!" Give me a choice between drinking twelve beers from around the world or listening to this record right from a theater in LA in 1980, and I know which one will do my soul more good. 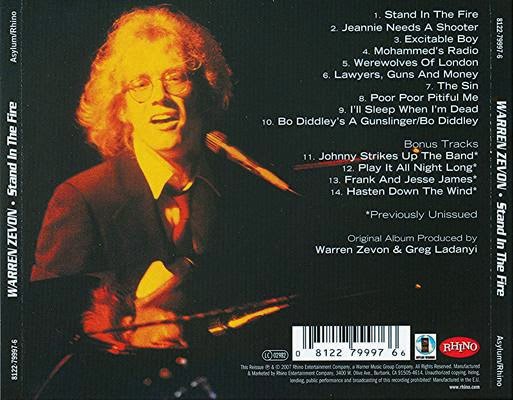 Available on: Original Vinyl LP, CD and 2007 Rhino remaster which adds four previously unreleased tunes from the show, telling us that if the Dog did indeed eat the parts they didn't like, he threw them back up. Thank God, because I'll love any version of "Frank and Jesse James" and a live version of "Play it All Night Long" drives palpitations into my heart and gives a whole new meaning to it's chorus of "play that dead man's song."

One Last Hawk, er thought: The album was originally dedicated to Martin Scorsese, and it's a bit ironic considering the live record basically disappeared but around half a decade later Scorsese's use of the original studio version of "Werewolves of London" in The Color of Money (one of the masters all-time great music in film moments) added some needed bite to Zevon's name and pocketbook.