The Tenth Anniversary of the War in Iraq

It has been a while since I have written a Muckraker piece and it seems fitting to discuss the 10 year anniversary of the War in Iraq. This event in history is one of those events that people like to look through the lens of hindsight and point out that Dubya (and his brain trust) was wrong to invade. For some, this was apparent through the use of foresight.

I know what you are thinking, "whoa, Manny, there is no way that you could have know that Iraq would be such a cluster." Elementary, my dear reader. It had all of the markings of a tragedy but we (as a nation) pushed ahead. Regardless of the outcome, we have to ask if it was worth it. Honestly, it is difficult to say that the world is a safer place now that Saddam is gone. It certainly is not in Iraq and wasn't that the point?

Ten years have past and we still debate the merits of the invasion. "We should not have went in." Duh, thank you good old hindsight. Hindsight is practically useless since the aforementioned foresight told you that Iraq was a grenade waiting for the pin to be pulled (Saddam being ousted). The war in Iraq always had the markings of being a mess, you just had to see the signs or at least, the media should have done its job to highlight them. In the end, it is ten years later and one has to wonder if the ends truly justified the means in this one.

Posted by Manfred "Manny" Funkowitz at 7:55 AM No comments:

"I don't have a drinking problem. I just like drinking:" Seven Psychopaths 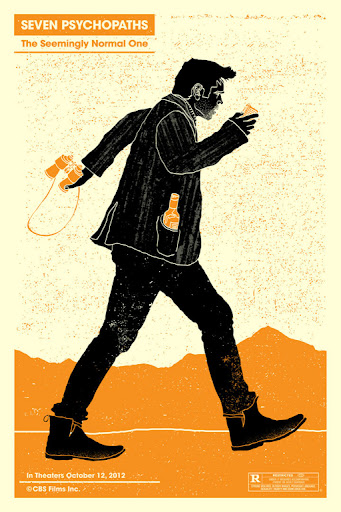 Back in 2008, Martin McDonagh wrote and directed a film that I never expected to see. Namely, I was intrigued by the trailer but was pleasantly shocked by the final product that I saw on the screen. Flash forward three years and McDonagh has returned with his highly anticipated second film. Much like In Bruges, I went into the film without my usual routine of reading up on the film to not influence or sour my view on it. While the feeling upon watching the film was not the same as Bruges, I still pleasantly surprised by McDonagh's sophomore effort.

Seven Psychopaths is centered around Marty Faranan, whose writer's block is keeping him from finishing his script for his film also entitled Seven Psychopaths. As one might assume, the film examines the screenwriting process through a completely new lenses. It is not two film geeks discussing a film over a cup of joe in a dimly lit diner, the bulk of the commentary takes place in the desert with Marty and two acquaintances (who are two of the film's "psychopaths"). McDonagh brilliantly contrasts his own view of film (through the character of Marty) to that of Billy's need for gratuitous violence that does little to advance his films plot (One might argue this is McDonagh's critique of the American cinema viewer).

It is kind of shame that this film did not gain much in the realm of exposure to American audiences. While it was shown on more screens than In Bruges, it was just as mis-marketed as that film. In many ways, it was not a dark comedy (it is more of a drama than anything) as it relies heavily on the wit of the script than it does on laughs. Unfortunately, the marketing and also the title of film play a role in making this film a hidden gem from the year that was 2012 in film.

Posted by Manfred "Manny" Funkowitz at 7:26 AM No comments:

"The D is Silent": Django Unchained 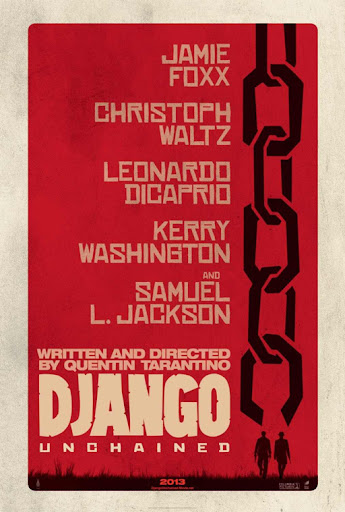 In an effort to not bore you to tears, I will not speaks most of my introduction discussing my feelings toward Quentin Tarantino. Certainly, the argument can be made that he is both overrated and pretentious, but it must be said that he typically releases entertaining films. Moreover, the trailer looked less than great after several viewings. This played a large role in my waiting to see Django and in spite of my own hubris, I concede that might not have been the most intelligent decision on my part.

Foremost, It must be noted that Tarantino finally took the time to release a film that is overtly an homage to the spaghetti westerns of yore. Of course, an homage does not make a western on the level of Leone's but that is a qualm for another day (and kind of irrelevant to this review). From a technical perspective, Django does not break any new ground and in several instances the technical choices take the viewer out of the film (such as the overuse of squibs and some of the lighting choices).

The strength of Django lays with Tarantino's script, which is one of his better pieces in recent memory. When you remove the ability to reference pop culture at length, Tarantino is able to do more with the story rather then being dialogue centric. All issues with the story are set aside with the performance of Christoph Waltz, one which eventually nabbed him another Oscar.Waltz is by far the best thing about this film and his character is possibly Tarantino's first character that is not a caricature of a human being.

At the end does Django Unchained break any new ground? Probably not. In the end, that really does not matter too much considering it is a step forward from Basterds. Moreover, it was nice to finally get his take on the Western genre after years of asking for a "Leone."


Parting Thoughts:
What was the deal with Tarantino's accent?

Posted by Manfred "Manny" Funkowitz at 2:26 PM No comments: