This summer saw the return of several well-known franchises to the silver screen such as Jurassic Park, Avengers, Terminator and Mission Impossible. When pressed for a single word to describe the Summer 2015 in movies, Hawk, Manny and Gonzi would respond (most likely in unison) that it was "Mediocre!" After all, we might love all of these franchises but we will not let our fandom cloud our judgement. So, join us at an undisclosed diner to discuss the 2015 Summer in film.
Posted by Manfred "Manny" Funkowitz at 3:38 PM No comments:

It seems that Gonzi has turned his back on the sport of Baseball and both Manny and Hawk are incredulous to this fact... Or so they originally think. It turns out that Gonzi makes some really great comments about why baseball is not his favorite pastime. Also, in this episode, we examine the ridiculousness of Alex Rodriguez making out with himself for a GQ pictorial.
Posted by Manfred "Manny" Funkowitz at 7:00 AM No comments:

PIE Times - Episode 2: Compton The Aftermath (Compton Not The Company)

From another undisclosed diner in the desert, Gonzi, Hawk and Manny tie a bow on the discussion from last episode. They ponder one of life's deepest questions, namely, what happened to Snoop Dogg artistically and will Keith Stannfield reprise his role in Snoop Dogg biopic?" Other topics pondered over pie is the topless movement occurring out in New York City as feminists fight for their right to go shirtless. Also, we debut the segment of "What would GONZI do?"
Posted by Manfred "Manny" Funkowitz at 6:00 AM No comments:

Email ThisBlogThis!Share to TwitterShare to FacebookShare to Pinterest
Labels: Compton, Keith Stannfield, Snoop Dogg, What would GONZI do?

PIE Times - Episode 1: Compton the Album and the Movie


From an undisclosed diner, this is the inaugural episode of the PIE Times podcast and we (Gonzi, Hawk and Manny) are going to focus on the city of Compton, California through the lens of Dr. Dre's final studio release (Compton: A Soundtrack) and F. Gary Gray's film, Straight Outta Compton. We also have a special guest stop by the studio, you will have to listen to hear it is.

Posted by Manfred "Manny" Funkowitz at 7:00 AM No comments:

No need to let this PIE cool on the windowsill! 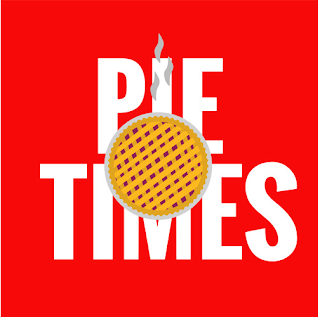 PIE Times
We here at the Maus would like to introduce a new venture between Hawk, Gonzi and Manny, PIE Times. What is PIE Times? It is the beginning of a new podcast from these three gents that will discuss such various topics of pop culture ranging from movies and music to our affinity for pie. Starting today, we will be posting the episodes of the PIE Times here and Facebook (It is also available through iTunes as well) as I continue to build the permanent home at pietimespod.com.

-Manny
Posted by Manfred "Manny" Funkowitz at 7:02 PM No comments:

PORTEcast (05/20/2015) - A Winter Visit to Gotham Download this episode here AS many of you know, we here at PORTEmaus are pretty big fans of the man who dresses up as a bat that pummels criminals into submission (Batman for those not in the know) and there was a little (operative word being little) interest in the television show that takes place in his city. After catching a couple episodes, Wazzman and Manny firmly washed their hands of the series because of its absurdity (They fit a villain who kills people for balloons for pete sake!). When this episode was recorded in November/ December, no one could foresee it getting picked up for another season, maybe it improved after the exploits of the balloon man.
Posted by Manfred "Manny" Funkowitz at 7:24 AM No comments:

In the long awaited second Tabletop episode we review Zombie 15' but get distracted by the hoard that is other zombie games. We talk expansions for Sushi Go!, our most desired games and some truly head-scratching games for our What's Confusing Us segment.

This was truly ugly: The worst show of 2014 was True Blood

This is the continuation of the year in television following one of the worst shows of the season.

The Ugly - The year in Television

To be completely fair, True Blood was never a good show, it was at its best (the first two seasons) an entertaining soap opera with gratuitous violence and frontal female nudity. Every season after the second kept the violence and nudity (No complaints from this reviewer), while introducing a heavy dose of stupidity and poor acting for good measure.  It must be said that I never went into this show thinking it was Deadwood or any other iconic television show but the expectation was not to leave the episode watched angry because forty-two minutes were wasted.

If you asked me what happened during the final season of this show, I would respond with a blank stare as literally nothing of importance transpired. I suppose I meant nothing happened in a figurative sense because something was filmed and presented over the airwaves. I do know that the main plot of season seven could best be described as a "C" story that I spent wishing that the writer would switch back to non-existent main story. Episodes would focus on forcing a love story between Anna Paquin's character and a wooden stump that she had no on-screen chemistry with... Wait, they are married in real life? That makes fucking sense since he is about as charming as a kick in the sprouts.

Overall, the final season of True Blood felt like a bad attempt at improv as nothing made sense nor was thought given as to what should happen save for Eric making it and the stump dying. I know that was a spoiler but who gives a shit, it was a feeble attempt at evoking an emotional response from the audience that was long gone. Honestly, if HBO wants to know why The Leftovers had low ratings, look at its lead-in, it was a show that was so bad that it left the viewer angry. I think now is time that we reward HBO not with the cancellation of subscriptions but with a class action lawsuit for having to watch this show and the fact that Girls continues to be aired (I would make a Lena Dunham naked pear joke but frankly, I am do not have the energy). There is not much more to say except that this shit was one of the worst things to make the airwaves regardless of the year.

Honorable Mentions: Modern Family, The two minutes I saw of Mulaney (Since that was all I could stomach)

Parting Thought: I am impressed HBO, you bookended this look at television. Also, I spoke with my fellow plaintiffs for the class action suit, we will settle the suit for three more full seasons of Deadwood... Make it happen.
Posted by Manfred "Manny" Funkowitz at 6:18 PM No comments:

This is the continuation of the year in television following one of the worst shows of the season.

The Bad - The year in Television

The year 2014 witnessed the end of several series and one of the most mediocre series finales was Sons of Anarchy. In the beginning, the series was interesting with storylines that made you care about what happened to these characters. Kurt Sutter was hailed as a television genius that helped further dramatic television on basic cable. Then somewhere around the end of season four the wheels fell off. Sure, it was mildly entertaining but from week to week every episode was the same.

Jax would complain that they had to get out of guns by taking the club further into running guns. This made for some great riffing for Hawk and I but made for some frustrating television.  By the final season, the show was incoherent and chock full of goPro footage to heavy metal instrumentals. Whoo! Then if you couple the lack of story elements with the bloated run time (episodes were between 45 minutes to an hour plus without commercials) and it was obvious that the season was nothing more than a Kurt Sutter ego stroke.

In defense of the writing staff, final seasons are difficult to execute even when a plan exists. This season by all accounts had no plan other than to satisfy the ego of one, Kurt Sutter. There were points during this season where he admitted that scenes or characters were added because he simply thought they were "cool" (See homeless lady in the finale) and coupled with inexplicable actions taken by characters made for an unsatisfying season of television. Every aspect of this season should have ended up on the cutting room floor as they added very little to either the plot or closing out storylines. Sutter and company abandoned characters and plot for the bulk of the season only to rush their conclusion during the deification of Jackson Teller. Ultimately, the final season of Sons should be a masters class in how not to make a television show whether it is the first season or the last. Thanks for the memories Kurt and making a final season as bad as Dexter.

Parting Thought: So, FX gave them the budget to film bloated episodes but cut their special FX budget, resulting in horrible looking CG blood and explosions. I hope that was worth it.
Posted by Manfred "Manny" Funkowitz at 6:31 PM No comments:

Something Deep and Dark Detectives - The Good from 2014 in Television

I am going to do something different this year with my year end lists. As the title of this post would indicate, I am going to focus on one title that was in my humble opinion the best or with the subsequent posts progressively worse. Let's get started with the best show on Television during the 2014 season (Whether it is new or returning).

The Good - The year in Television

It is not shocking that an HBO show would be a hack reviewer's favorite show of the year. Outside of True Detective, HBO had several strong shows this past year, whether it was the return of Game of Thrones, Veep or PORTEmaus staff favorite, The Leftovers. Any of these might be solid choice for the best television show of the year but frankly, each of these shows pale when compared to True Detective. Prior to its release, I was intrigued by the promos and the possibility of Matthew McConaughey actually killing it as a lead actor (Sorry, I was not too impressed by his performance in Dallas Buyers Club, it was good not great).

True Detective is a clever and well-written mystery with Woody Harrelson and Matthew McConaughey as detectives being confronted about a murder that they solved in 1995. The season takes place in both real-time and through recollections of the past to highlight the case and the volatile relationship of Harrelson and McConaughey's, Det. Hart and Det. Cohle. In the end, the season becomes a redemption tale of sorts as Hart and Cohle seek to apprehend the true perpetrator behind the murder of Dora Lange.

To put it simply, True Detective is a damn good show. It is kind of a shame that season two will not have Harrelson and McConaughey but it will be interesting to see if Nic Pizzolatto have lightning strike twice with Farrell and Vaughn. Honestly, if the Pizzolatto's writing remains at the level that it was for season one, it is possible to recapture the magic. It will be interesting to see how the second season comes together with the change in cast and structure for directing the series. I know that all of us here at PORTEmaus will be curious to see how it plays out.

Parting Thought: I wonder if season two is going to have a bitchin six minute long take...
Posted by Manfred "Manny" Funkowitz at 7:52 AM No comments: