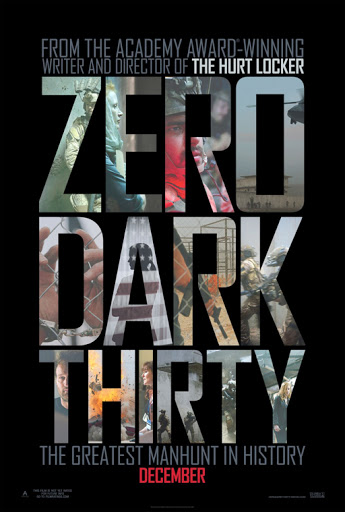 I have to say it. The Hurt Locker is an overrated film. It was so very overrated. There I said it. Whew. That was not as bad as I thought. Seriously though, it is a good film not a great one and I would not consider it the best film of 2009. Needless to say, I was very hesitant towards seeing Zero Dark Thirty and frankly, it has a lot to do with Bigelow being as overrated as her "masterpiece." Moreover, I expected it to be a rah rah political lovefest extolling the dominance of American covert and military might and I was wrong on both counts.

Zero Dark Thirty reminds me a lot of United 93 in that the was apolitical in its presentation of the subject matter. To portray the events in this manner was a great decision, in spite of the Republican accusations to the contrary. By all accounts, Zero Dark Thirty is the best piece of cinema to come forth from Kathryn Bigelow. For sure, the film is a slow moving film but that does not diminish compelling nature of the story or the caliber of the performances. Ultimately, given the power of hindsight, this film would rest towards the top of my "best of" list (I probably would have written about it as well... Not two months after).

One of the most popular misconceptions about this film (aside from the aforementioned Republican position) was that the film promotes the use of torture to obtain information during interrogations. Honestly, the film presents the opposite perspective since the United States would have found Bin Laden much quicker using information received from individuals under duress. Moreover, it is far more important that it re-injects the use of torture as an interrogation technique (within the context of intelligence gathering) into the consciousness of American citizens to ensure that it does not happen again. Although, I can admit that I might be reading into Mark Boal's script. In the end, Zero Dark Thirty offers an interesting perspective on the "greatest manhunt in human history..." Move over, manhunt of John Wilkes Booth.

Parting Thoughts:
Kyle Chandler needs to be in more films... But that goes without saying.