"There is no creature on earth half so terrifying as a truly just man:" Game of Thrones 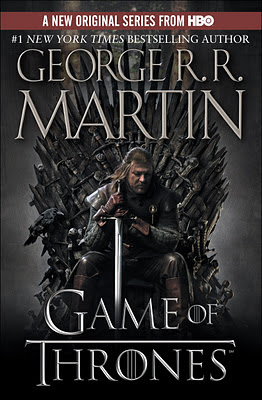 Way back in the month of August, I offered a qualitative summary of HBO's Game of Thrones where I reviewed what I found to be enjoyable about it. At the end of that "review," I entered into (mostly internal) debate about whether or not I would read the book with its mammoth page count. Well, I decided to give the book a go once my studies began drawing to their conclusion. As I mentioned in that August post, I am not much of a fan of the fantasy genre but I have enjoyed some of the more well-known series such as Lord of the Rings, Harry Potter and His Dark Materials. While this book will not change my overall reading habits, it is without a doubt, one of the most enjoyable pieces of fiction that I have read.

Game of Thrones follows the intrigues regarding the seven kingdoms under the rule of King Robert Baratheon, who led a revolt which resulted in the death of the previous monarch known as the "Mad King." The bulk of the book follows the members of the Stark family, the head of which is the Warden of the northern part of the seven kingdoms. After the death of his mentor, King Robert taps his closet friend to be the Hand or advisor to the King. Eddard "Ned" Stark begrudgingly accepts the position and quickly realizes that things are not what they seem. People cannot be trusted, the Seven Kingdoms are broke and there are some who wish to see the King dead. With the "accidental" death of King Robert, there is a series of events which will take the Seven Kingdoms into the midst of a vicious civil war. Whew! Sadly, this is a mere simplified account of the book and by no means comprehensive.

When I read Tolkien's The Lord of the Rings trilogy, I have never read a series with such a rich history that the world was built upon. George R.R. Martin surpasses the notion with an attention of detail that I have not read in another series or book for that matter. Of course, this is easily explained by the page count which tops out at roughly seven hundred pages. The strength of Game of Thrones is the narrative structure. Each of the chapters is told from the perspective of eight characters, most of which are members of House Stark. I thought this was an enjoyable means for forwarding the story as it kept me interested in the overall story. Curse my linear minded brain and its desire for a conclusion to individual stories!

This novel contains many things that you would find in a stereotypical fantasy novel. You have knights, allusions to dragons (who are extinct), giants, wights and others but the Martin transcends the genre because of how character driven the narrative is. The characters in this novel are multi-layered and whether you hate them or not, you as the reader are drawn to what happens to them. It is a novel where all the characters walk the fine line between life and death and any character might not make it to the end. As you know, I am a sucker for political intrigue and this is the central premise to the novel. With this added to the compelling narrative and likable character, you have an enjoyable seven hundred pages of literature. With that being said, I wholly recommend Game of Thrones to fans of the fantasy genre and those (such as myself) who typically do not read this types of books.

Parting Thought(s):
I am about nine-tenths of the way through the Game of Thrones show... So, expect a comparison between the two.

Also, I decided to take the leap and read the second book. A little teaser for you, in a week, I have read four hundred pages. The Literature Society post for A Clash of Kings should be up soon.
Posted by Manfred "Manny" Funkowitz at 2:35 PM

Email ThisBlogThis!Share to TwitterShare to FacebookShare to Pinterest
Labels: A Clash of Kings, Game of Thrones, George R.R. Martin, J. R.R. Tolkien, Lord of the rings