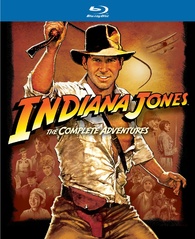 Who didn't grow up with Indiana Jones? If you didn't, please leave this site, go to your nearest store, do not pass go, do not collect $200, and pick up this set, go home, watch, and then go tell your doctor how you've found a brand new method for fighting erectile dysfunction. Anyhow, one of the most requested blu-ray releases is upon us, so, let's dig in... 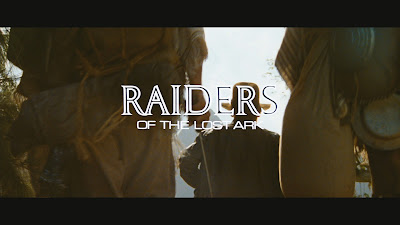 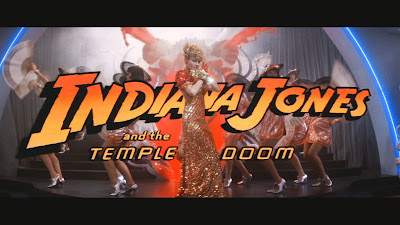 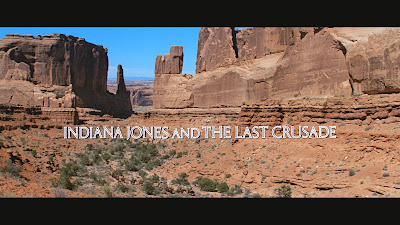 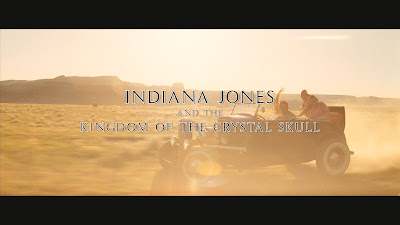 You must choose...but choose wisely 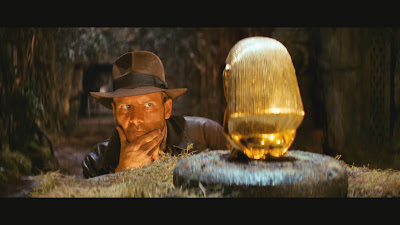 Personal Bias/QuasiFilm Review: I think the first Indiana Jones film I saw was Last Crusade, and like the other two original films, I saw them first on VHS. I can't even begin to fathom to the times I saw these films on VHS. I remember getting Raiders of the Lost Ark on VHS and being shocked to find it was the first made film, as the whole prequel inside of a sequel opening of Last Crusade felt like the beginning of a film franchise, not a trilogy capper. Top it off, when finding out that date wise, Temple of Doom actually takes place before either of them, then your childhood head really starts to spin. Nonetheless picking a favorite out of these films is like picking which kid you like the best. Even Kingdom of the Crystal Skulls has it's positives. I absolutely hated that film up on first viewing, but on subsequent watches I found myself liking all but two major components: the last ac: the whole pyramid sucked into the Earth bit right out of The Mummy Returns, the ET aliens and the wedding, that whole last bit just doesn't do it for me. The other? The Cinematography. Janusz Kaminski tried, in camera movement and aesthetic, to copy the look and feel of the original trilogy shot by Douglas Slocombe. Unfortunately, in lighting and film timing/color processing he did not. It is far too clean and shiny, too much film glow, too many times a shot that was shot on location or on set looks as if it's a glossy green screen shot. All in all though, these four films as a whole represent about the most fun you can have going to the movies. Childhood wise, from watching Temple of Doom countless times with my Grandfather after my Mom told me that movie was too violent for me, to watching Last Crusade countless times with my father, I just can't think of better memories. I've gotten to spread the love of these films too, to teenage friends who hadn't seen them, to my now-wife, her younger brothers - Indiana Jones is the gift that keeps on giving. 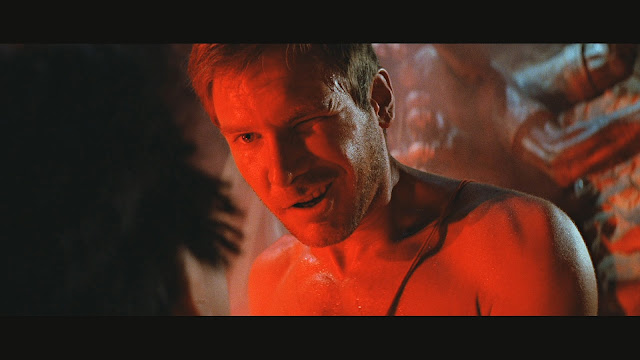 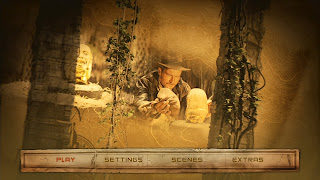 Aesthetically Speaking: Much like Star Wars Saga before it, Indiana Jones comes in a book style packaging, though the discs are housed more like the Stanley Kubrick blu-book set. This is a plus in that it houses the discs better and more securely, and allows room for more artwork. Speaking of, I like the artwork on and in this set much better, again, than the Star Wars set. The cover that the book slips into has a nice gloss to it's front and back, and the titles have a nice slight emboss to them. The motion menus recall the old DVD ones, though crisper and with updated graphics. Finally, I wish there was a little insert booklet with this set, but that is my one, very minor, quibble. 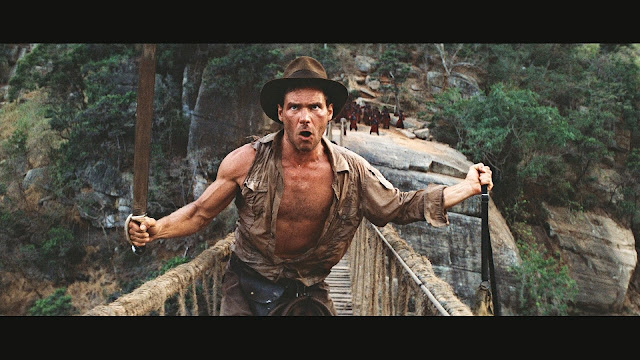 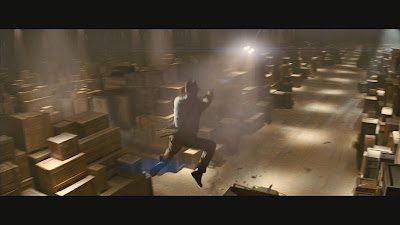 Visually Speaking: When you have four films that take place over nearly three decades of time, and budgets that grew with each subsequent release, you might be worried that you'll have quite a dip in one direction or another when it comes to the visual transfers of the films. Thankfully, that's not really the case. All three original films share a very similar color grade, that pushes into the dusty reds more than most films. Raiders IS in fact the worst looking overall of the bunch, it's actually right on par with Temple but the opening scene has a bit of unevenness, in the blacks, in the gamma and whites, but with a scene that complicated lighting (and age) wise, I forgive it. The rest of the film looks amazingly good, and the 4K restoration looks to be top notch. All three original films have a slight touch of DNR to give a more natural grain look, but there is still plenty of grain and detail, so don't think this is a Patton type of DNR mess. This is on par with how Criterion uses the proper amount of filtering. Last Crusade looks the best of the original three films, it looks amazingly good in fact and should shock everyone. The fourth film of course being only four years old, looks solid despite the problems I have with it's color grade. All four have high nitrate AVC codecs that should please any numb crunchers and though there are a few spots of softness in the image across the original three films, I have to say, I didn't expect them to come out this well. For those like me, who grew up in chopped off full-screen VHS copies of these films, it's a revelation. 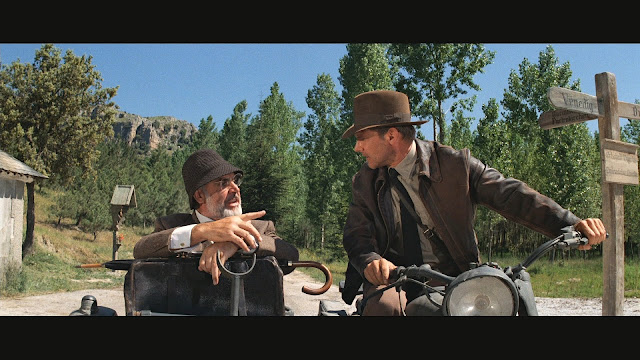 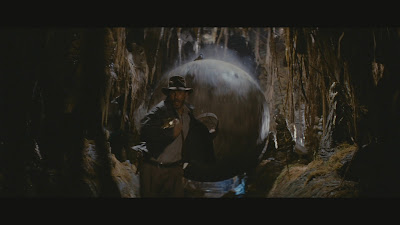 Speaking of Sound: As I've gotten more home theater equipment over the years, and mixing 5.1 on my own time for my own projects, I've come to realize just how much sound can add to a film presentation. Blu-Ray in fact, for all it's leaps and bounds ahead of DVD in the visual department, sometimes what gets lost in the shuffle is just how much an improvement in audio it also is. These surround sound mixes of these older films rock, my lone complain is they're a bit loud or boisterous at times. They are massively awesome uncompressed tracks, and if you don't have a surround sound set up and you're just watching on the TV itself, go buy one. Music is clear, the sound effects have such great dynamic range and depth, the dialogue is crisp. It makes these films all the more enjoyable. 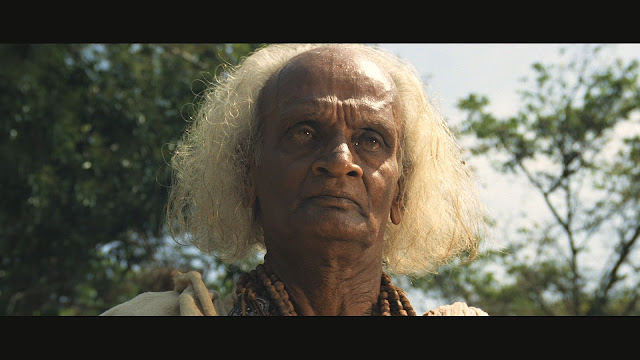 A/V Bitrates: For you number crunchers out there, worried that excellent transfers in audio or video might be hindered by poor encodes, don't fret. The AVC MPEG-4 video encodes are consistently in the 30's, the uncompressed audio tracks waver in the 4.5MBps range, you just can't complain. The films are presented in their original 2.35:1 aspect ratios, so you'll get the black bars on top and bottom, while also getting those sweet anamorphic lens flares. 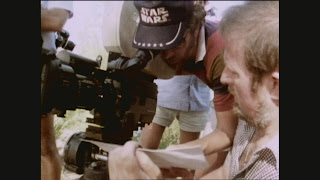 Trailers on all four Films
On Set with Raiders of the Lost Ark
From Adventure to Legend
Making of on all Four Films
Behind the Scenes with Stunts, Sound, Music, VFX, Creepy Crawlies, Friends & Enemies & More

In almost every section I listed there, there is multiple choices of featurettes and such. This 5th disc is pretty packed with stuff, and from archival on-set footage from Raiders on to new interviews and more, you should come away satisfied. 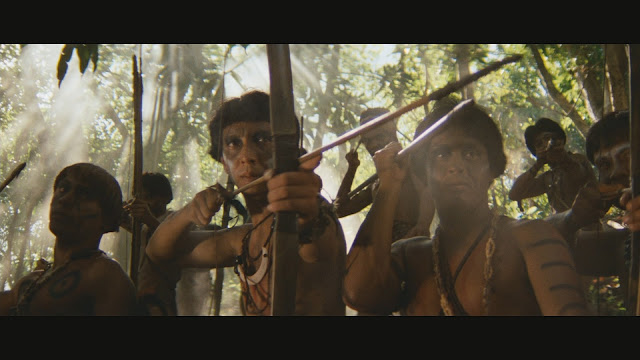 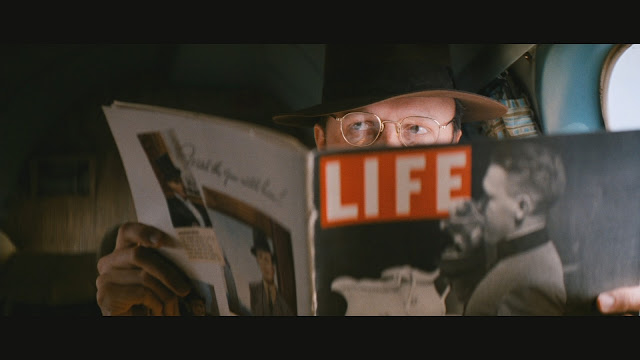 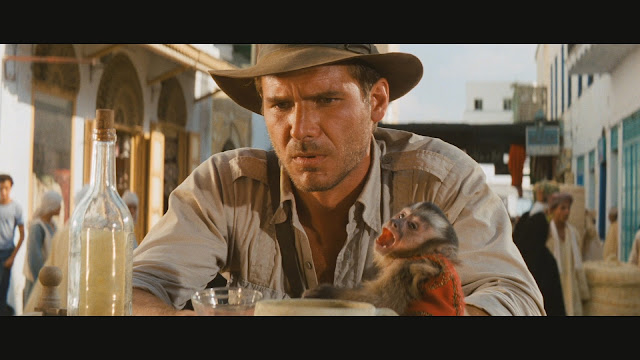 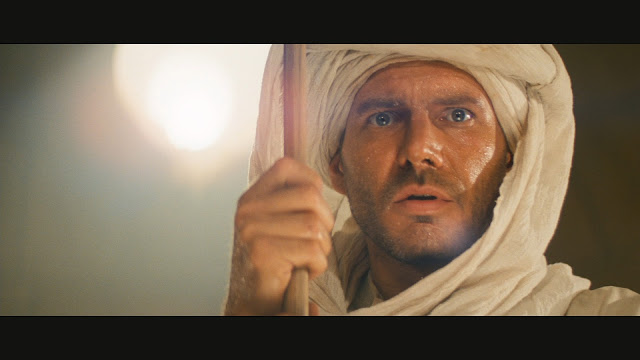 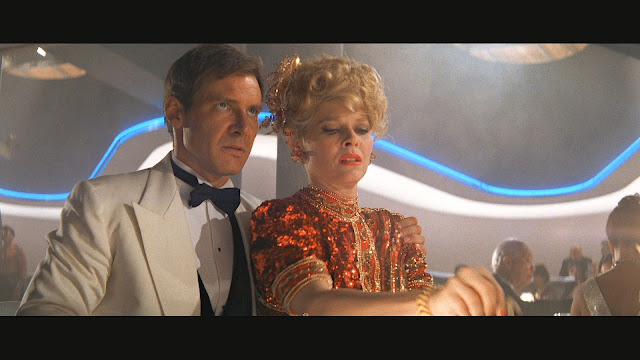 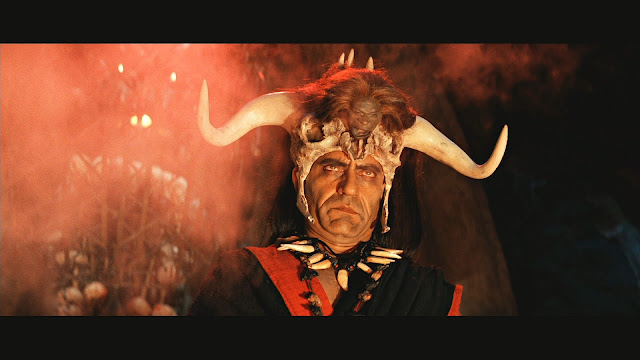 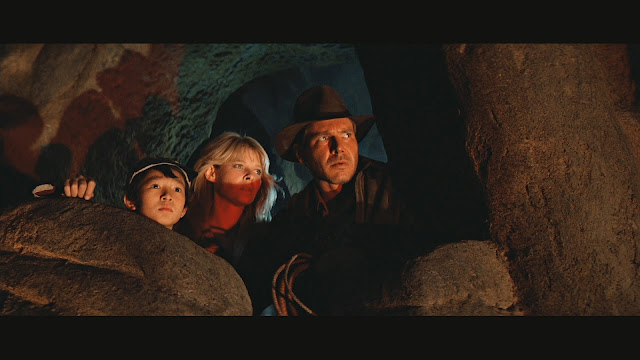 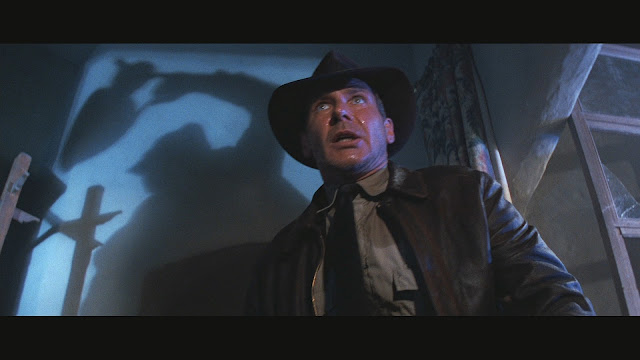 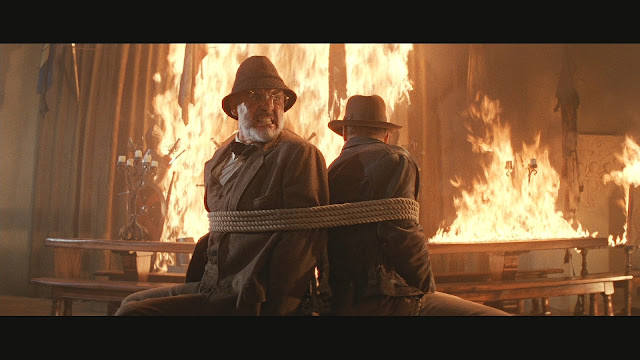 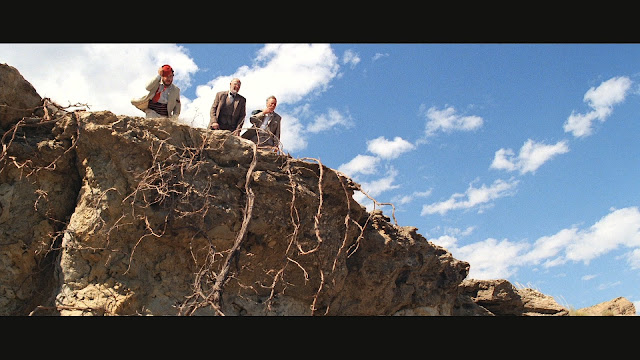 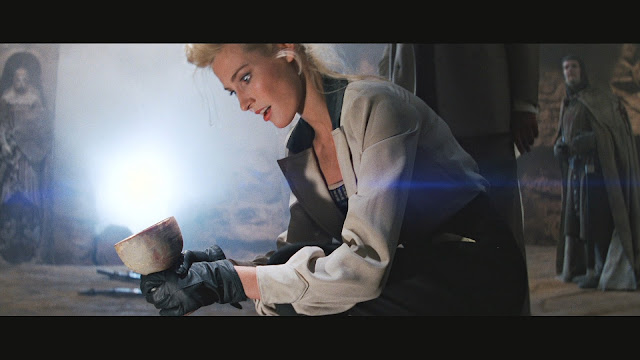 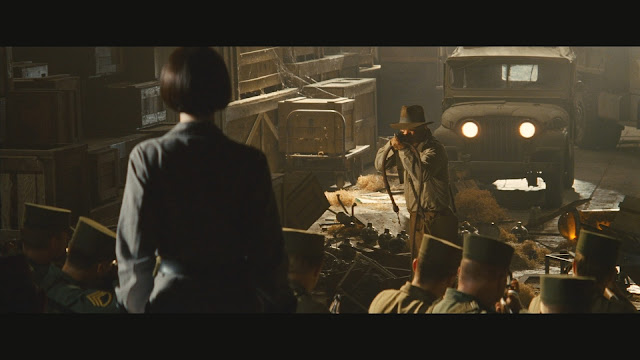 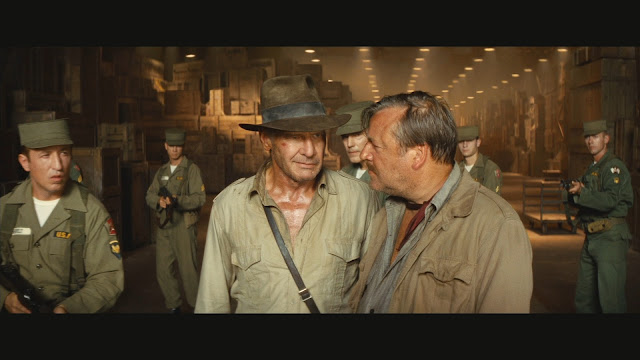