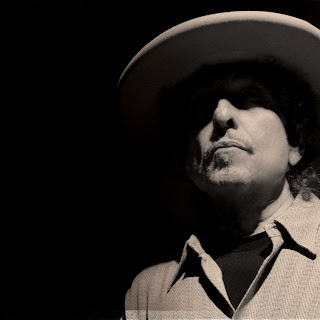 I've reviewed every Dylan album he's come out with in recent years on one website or another, but there's always excitement to hear what he has to come up with in song form. The years of worrying if it will be good or not have passed, it seems like decent is the worst we'll be getting from him until he decides to either stop recording or die. However, a great album? The next placeholder of "the best thing he's done since Blood on the Tracks..." moniker that's been used so many times to so many albums over the years? Well, that's also something I, for sometime now, thought wouldn't be happening again. Can Dylan pull out one last (or at least once again come up with a) masterpiece? Well, let's dig in... As I listened to Bob Dylan's newest studio album (number 35 for those with a love for calculations like Mr. Lau) I finally had to get up and leave the room. I left to go get my wife, who, for those who don't know, first came into contact with me because of our mutual admiration for rock n roll's troubadour. I had to get her to sit and listen with me, as I had to be sure as to what I was hearing. If I didn't know better, there were goosebumps on my arms and the unshakeable feeling that, around halfway through track 9, I was listening to the best album Dylan had done since 2001's Love & Theft and, from a singer-songwriter standpoint, the best, most focused work of his since 1997's Grammy Award winning album of the year Time out of Mind. She listened to the songs in her own chosen order and came to the same conclusion. It seemed that, 50 years into an almost superhuman recording career, the man born Robert Zimmerman still had something to say.


"I wear dark sunglasses around my eyes,
There's secrets in them I can't disguise"
~Long and Wasted Years~

Also, Dylan doesn't just have something to say, but something to hear: Maybe it's Charlie Sexton, back in the band since late 2009 and this the first time in a studio with Dylan since Love & Theft, maybe had some help in rejuvenating Dylan's arrangements. Maybe it's the sound Scott Litt (producer of the Replacements criminally underrated All Shook Down and savior in the mixing room on Nirvana's In Utero) being being the board as engineer and mixer came up with for this Jack Frost (Dylan, you're still not fooling anyone with that name!) production. But no matter what, there is some nice depth to this albums sound and musical work. But, on a Dylan record, the music is sort of secondary to lyrics, isn't it? So much so that in recent years a solid line or couplet turns some super Dylan fans opinion of a song upside down. A decent or even bad song can garner a stellar reputation based on a good verse or line. We'll get onto those precious lyrics now, but I did want to mention that, while not too far off in a couple places (mainly "Duquesne Whistle" and "Early Roman Kings") from his recent albums, there is a good, deep sounding record here, and he's trying some things he hasn't done recently. However there's no harmonica for those mouth harp fans.


"Ever since the British burned the White House down,
There's a bleeding wound in the heart of town.
I saw you drinking from an empty cup,
I saw you buried, I saw you dug up.
~Narrow Way~ 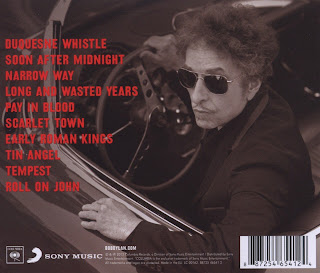 First thing you notice on a record if you, like me, actually buy a physical album of some sorts be it CD, vinyl or 8-track, is the cover. This cover isn't Dylan's best, it looks better in person than online, but it's no sharkskin suit that Dylan's versions of the Early Roman Kings wear. The back cover is awesome, and there are photos inside that show Dylan can still take a snazzy photo. So why the cover? Well, there are certain references in the album that link them, but still, I'm not a huge fan. That's where my disappointment ends. The album opens with a ragtime jazz piano intro that makes you think you're listening to Dylan's follow up to his 1969 country crooner, Nashville Skyline. This Robert Hunter co-penned track (the only track with a co-writer this time around) quickly pumps into a train-song shuffle that you could hear latter day Johnny Cash giving a go at on his Rick Rubin albums. It's an upbeat song that, after hearing the whole album through, is about as bright as it's going to get. Some say it's always darkest before dawn ("been dark all night/ but now it's dawn" as Dylan puts it on "Narrow Way") but on this album, it seems the dawn leaves and the dark comes, and then midnight. "Soon After Midnight" sounds like it might be a "Moonlight" type crooner or "Where Teardrops Fall" love ballad with the opening steel guitar, Dylan's smoothest and cleanest vocal the album offers and the opening lyrics: "I'm searching for phrases/ to sing your praises, I need to tell someone/ It's soon after midnight, but my day has just begun", but by it's end is soaked in violence as "they lie and dine in their blood/ two timing slim, who's ever heard of him? I'll drag his corpse through the mud." Don't worry folks, it gets darker...and stranger.


"Our nation must be saved and freed,
You've been accused of murder, how do you plead?
I came to bury, not to praise.
I'll drink my fill and sleep alone,
I pay in blood, but not my own..."
~Pay in Blood~ 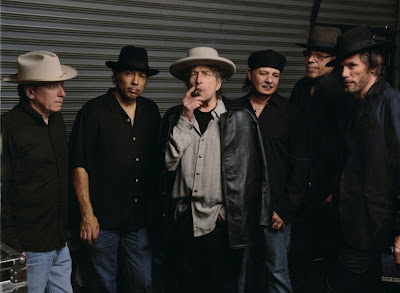 Through the next 5 songs Dylan dusts off his "Brownsville Girl" vocal delivery for "Long and Wasted Years," goes into Together Through Life territory for the accordion filled, Muddy Waters blues-beat-built "Early Roman Kings," and gives us "Scarlet Town," the type of song that lovers of "Ain't Talkin'" and "Forgetful Heart" will absolutely go nuts for. In fact I'd describe it as "High Water" mated with "Forgetful Heart," with a nice, thematic story pocketed inside it. Then there's "Narrow Way," the type of rocker that should cook live. On "Pay in Blood" he seems to decide to go up against Tom Waits' "Hell Broke Luce" as the most bad ass song in recent memory. Sounding like a beefed up version of the Rolling Stones "Hand of Fate," Dylan puts together a dark and violent testament of faith in a world that's always looking to get you down - be it women, politics, gambling, the economy, or something else altogether. "The more I take, the more I give/ The more I die, the more I live." Dylan's willing to stone you for the wrongs you've done, he's sworn to uphold the laws of God, and at the end of the day, Dylan's grinding his life out steady and sure. If the radio made any sense, and people's ears had any taste, this song, even with it's nasty, dirty vocal, would be a hit.


"The gun went boom and the shot rang clear,
The first bullet grazed his ear.
Second ball went right in,
And he bent in the middle like a twisted pin.

He crawled to the corner and he lowered his head,
He gripped the chair and he grabbed the bed.
It would take more than needle and thread,
Bleeding from the mouth he's as good as dead. "
~Tin Angel~

The final three songs on this album have been getting the most attention, and for good reason. It's the finest set of three songs Dylan's put together in sometime. I never thought we'd see Dylan doing ballad storytelling songwriting ever again. Sure, he can still put story into song, look no further than "Nettie Moore" from 2006's Modern Times. But ballad storytelling in the sense, of say, "Ballad of Frankie Lee and Judas Priest" or "Hurricane" (or "Isis" or any other track off of 1976's Desire)? No, he won't do that again...right? Wrong. Dylan goes dark...really dark...for a twisted, depressing big brother of "Lily Rosemary and the Jack of Hearts" in the tale of a love triangle gone wrong, "Tin Angel." If Shakespeare (also, anyone wanting to tie in Shakespeare's last work being The Tempest to Dylan's choice of title of this album, look no further than his recent Rolling Stone interview where he debunked that in typical Dylan fashion) decided to write a folk song, this is it. Dark, long at 9 minutes, with a hypnotic one-note arrangement that has more going on in it than you think. Did he go so dark on a song that shares the same title to a Joni Mitchell song just a year after she trashed him in press by coincidence? Hmm...He then goes into a titanic, 14 minute long ocean of a song (puns intended) titled "Tempest," hence the album title! Dylan's version of the Titanic sinking, built on an old Carter family melody, is the type of sea shanty song that Dylan might of pulled out of the headlines if he was recording Freewheelin' in 1912 instead of 1962. It's 45 verses, and while there are those who have mentioned there's no chorus, there are a few of those verses that are basically built as the chorus of sorts, the verses concerned about the Watchmen sleeping. Leo Dicaprio makes an appearance as a painter, though he's overshadowed by the lord of death. How does he end this LP? Exactly how you would of expected, if this was 1981...a tribute to his old pal John Lennon, "Roll on John." It's not sappy, but it is heartfelt. What critics have begged Dylan to say in quote to their questions on Lennon for years, it's here. Utilizing the title of an old folk song Dylan himself sang in the early 60's, and mixing in a few Beatles lines here and there ("I heard the news today, oh boy, They hauled your ship up on the shore"), Dylan puts together a strange, though as I said heartfelt, tribute to a man many (though not myself) consider Dylan's songwriting contemporary in the 60's and 70's.


"Jim Dandy smiled, he never learned to swim.
Saw the crippled child, and gave his seat to him.
He saw the starlight shining,
Streaming from the East,
Death was on the rampage,
But his heart was now at peace...

The watchmen he lay dreaming,
As the ballroom dancers twirled,
He dreamed the Titanic was sinking,
Into the underworld..."
~Tempest~

Then it's over. 68 minutes, a LOT of dead bodies and 10 songs in, Bob Dylan's 35th album is over. Maybe his last, who knows? This is a guy who came out of nowhere in 2009 to release two albums just months after releasing a contemporary collection of outtakes/rarities in what was looked on as a capper to this era. Each release, the odds are higher it's his last, being 71 years forever young now. For that reason alone, as I listened to those last three songs, I'll admit, tears felt like they were welling up. Because Dylan can still be so good, even though we just don't know for how much longer. One thing is for sure, this is on the very short list thus far for my favorite albums of the year.


"I think that when my back was turned,
The whole world behind me burned.
It's been so long since we walked down that long, long aisle.
We cried out on that cold and frosty mourn,
We cried because our souls were torn.
So much for tears, so much for these long and wasted years..."
~Long and Wasted Years~