*Editor's Note: This was a part of our Dark Knight Rises coverage that ultimately fell through the cracks... This is also the end of the Funkowitz backlog. 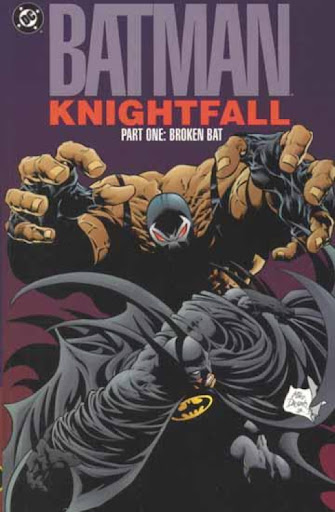 It has been almost two decades since the first and last time that I have read the first volume of KnightFall. I remember it like it was yesterday, when I spied it sitting in the new book section of my local branch of the Phoenix Public Library. For a twelve year old, it was a nice respite from the works of Michael Crichton and assorted Star War (I read a lot of crap back then). It may be running towards its twentieth birthday but Knightfall is still a relevant piece of the Batman mythos (Moreso than Miller's now cliched and kind of dull (story for another time kiddies) Dark Knight Returns)

Knightfall Part One is a difficult trade to read for some who loves Batman. With every turn of the page, you know that some form of doom is coming (or if you were an aficionado of Wizard back in the day) that he would be broken physically. While the breaking of Batman's spine by Bane is compelling, it is --in my humble opinion--the breaking of Batman's will that is heartbreaking. Bane stacks the proverbial deck against Batman with the latter mentally succumbing to the stress well before the physical. 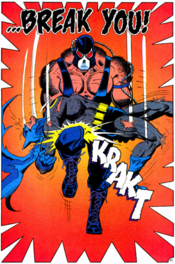 The end of the story ends with the Dark Knight being broken both physically and mentally. For me, this has always been difficult to accept and watching it play out on the silver screen nearly brought the man with heart of coal to tears. While in the back of our minds, Bruce Wayne and his alter ego Batman is somebody who is supposed to be inexhaustible, a mortal man who can do anything. As a fan of DC Universe, witnessing his unraveling and ultimate destruction, you lose all hope. Knightfall leaves the reader how Gotham is ever going to recover from this because after all, if the mighty Batman has fallen, how does Robin and the others stand a chance?

Parting Thoughts:
It might be going on two decades but it still remains a seminal piece of Batman's history.