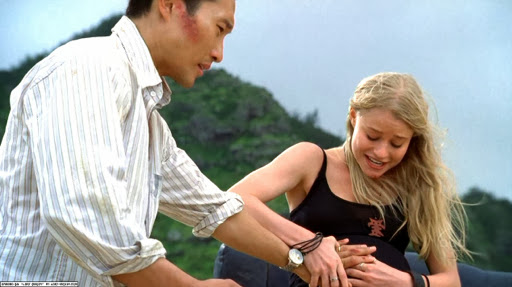 The second part of the Pilot provided is with some glimpses into Charlie and Kate and what they were doing on the plane. It also began to flesh out Sawyer and Sayid, two audience favorites that definitely had some gray areas in their past. Also there's that little run in with the polar bear. But more than anything the show began to build these characters. All of them flawed and now stuck together and we began to see how tensions would rise and how relationships began to form. The shot I chose is a simple scene where Jin gives Claire some fish, I'm assuming it's Uni since he was seen harvesting sea urchins. She is the only one to actually take the fish and immediately her baby, who hasn't moved since the crash, springs to life and she grabs Jin's hand in excitement to feel the kick.

There's no huge mythology or symbolic meaning to any of this. We simply see these two characters interacting. We see Jin, who is so proper and observant of gender roles and then Claire who takes him out of his comfort zone with her free spirit. It's a simple gesture of grabbing his hand but Jin plays it perfectly speaking in Korean with as much anxiety as possible. Sure you could say that Claire's black tank foreshadows something ominous, but that's way down the line and I think when this scene was created it was meant to humanize Jin and give Claire some hope. The baby would go on to become a beacon of hope for the island and here we see that life is possible, these people can survive, if they do something so easy as working together.

One last thought - still don't see how people could turn down food? If you're starving and someone is offering you FRESH FISH...c'mon now.