Gotham: Whatever Happened To The Dark Knight?

You might not remember but a decade ago there was a little show called Smallville. What people usually don't talk about is that Smallville began development as "Bruce Wayne." Whether it would've been as successful we thought we would never know. Well the crazy machine that is Hollywood seems intent on milking every comic property of all of it's life until it's a shell of what it used to be strutting down NYC with an emo haircut making finger guns. What am I talking about? Ladies and gentleman Fox TV is going to be bringing us Gotham, the tale a young Commisioner Gordon learning the hard truths of a decaying city. Throughout his adventures he will come across a young orphaned billionaire, a future kingpin, a brilliant trickster, catgirl, and a hippie. Also Donal Logue as who else...Bullock.

The first trailer was recently released and we were blessed with our first glimpse at the tone and feel of this new extrapolation of the Batman mythos. While I will ultimately reserve judgement for the fall premiere, because cmon, no way I would miss this, I do have a few hopes and worries.

First off Ben McKenzie, and Donal Logue seem to fall into their roles quite nicely. True fans will remember McKenzie as Batman in the incredible DC animated universe movie, Batman: Year One. Here he seems to bring the type of controlled intensity and unflinching moral code of the Gordon we know and love. Logue gives us less a view of what version of Bullock this will be, but a taste of the smarmy charm, yet ultimately good natured attributes that Bullock has been long known for. These two give me hope, they show an attempt at treating the material with respect.

The rest of the trailer, not so much. There is an inconsistency with the depiction of Gotham, ultimately showing us a Gotham that is far too clean and bright for the type of "war" the characters keep referring to. Any dialogue not spoken by the two leads seems out of reach for the actors delivering it. "I love this city, and I see it going to hell" it's pulpy and straight out of a comic book, and unless you can sell it, it sounds incredibly awkward and forced. The trailer is full of this type of speech. Couple that with some questionable characterizations and I approach this show with reluctant hope. I fear that along with Bats V Supes, this show will treat the greatest comic story ever told with the care of Michael Bay on a trip through arms and ammo section of the Met. Seriously wtf is Ivy doing?

One last thought - like I said, you know I'll be locked in day one hoping this is badass. But if not I'll always have this, thanks boss. 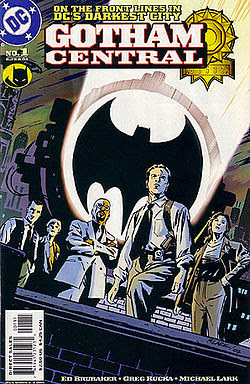