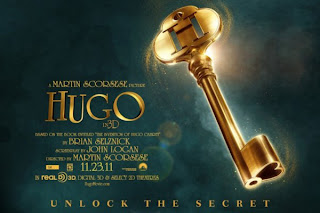 You know I had this film in my top ten must see fall films, and I had mentioned that the trailer left me a bit underwhelmed. I love the source material and was excited to see what Scorsese would do with a family film(I don't think I'll use the term "children's film" again). Some quick history on Scorsese and me. I definitely feel like he is one of the best Directors of all time, but is not infallible. I loved Goodfellas but was lukewarm on Casino. Gangs of New York is an interesting misfire. The Departed was cool, but for me The Aviator is his best modern film. Shutter Island and Cape Fear are great ventures into the thriller horror genre. Lastly, Taxi Driver is hands down his best film and one of the most brilliant films ever made. So where does this fall with its near ludicrous trailer? Hugo is a triumphant family film that tells a wonderful story of finding your place in life and those people who you meet who help you get to that point. It is about a time when film was magical and transported us to other worlds and made us believe in the supernatural. It is also one of Scorsese's most personal films as his own love of cinema and history bleeds through on every frame. 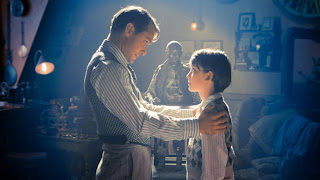 Hugo Cabret is a young boy who lives in the walls of a Paris train station, he spends his time fixing the clocks and watching the people come and go through the various nooks and crannies of the station. One day he encounters a young girl who has a key around her neck which happens to fit into an automaton that his father was working on before he died. As the two dive deeper into the mystery they discover the history of cinema and magic and how closely it relates to everyone. Scorsese has always had a kinetic camera that Tarantino wishes he could emulate. This film is no different a the camera flies around Paris and takes us through every crack and between gears and down stairs as we follow Hugo on his adventure. I'll take some flack for it but Scorsese embraces 3D better than anyone and yes that means Cameron as well. He has created an immersive experience to bring you into this world which is a fairy take version of the city of lights. 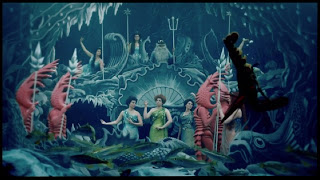 The chase scenes obviously lend themselves wonderfully to the medium, but when Melies is in his studio creating masterpieces of fantasy is when the 3D is really at its highest. We are there with everyone with the same sense of childish glee as our faces inevitably turn into one large smile as we get to see a master at work, literally creating dreams before our eyes and capturing them on celluloid canvases. The inevitable tragedy hurts even more as we were shown the joy that film brought these characters only to have it destroyed. 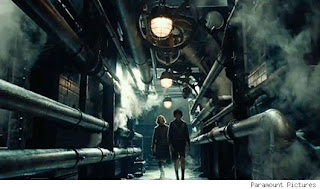 Hugo, ever the young hero, is of course obsessed with fixing everything. I would hope the metaphor is not lost on you all but needless to say the theme strings through the film without ever being pandering. Whether it is unexpected love softening a hard soul, or a puppy helping two people find love at the twilight of their lives, the film is an optimistic treatise on our ability as a society to lift each other. It is an interesting evolution for Scorsese who so often is curious about deconstructing humanity and seeing it in it most raw state, such as the devolution of the common man in Taxi Driver, or the destructive nature of our own physicality in Raging Bull, to his crime dramas as they examine the rise and decline of success. Here though we are presented with a group of people already broken, and as the film progresses we see how we help each other put ourselves back together. Seeing the passion return to Melies is a testament to the wonderful performance from Kingsley who is easily the standout here. He plays the legendary filmmaker with a strong sense of reluctance until he cannot hold it anymore and the passion comes roaring back. Along with Brooks and Plummer, my pick for best supporting actor. 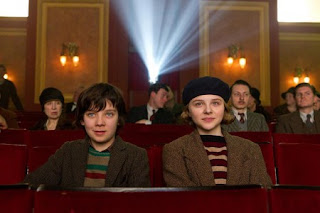 This is a great example of how family entertainment should be. I could go on and on about the various layers and meanings and references throughout but half the fun is being a film lover and going into this and discovering the joy for yourself. Cinema has always been a magical experience for me and now Scorsese has manifested this feeling on the screen. Impressive work from a legend himself.

One last thought - I know many of you cringe at the idea of Borat in a Scorsese film, but his scene chewing is kept to a minimum and ultimately he plays his role fine, I doubt it's a performance that's going to change anyone's minds on the guy though.
Posted by Bence at 7:34 PM