No. You're not a pet: Rise of the Planet of the Apes

Film Foray Cavalcade no. Trente-Cinq: Rise of the Planet of the Apes 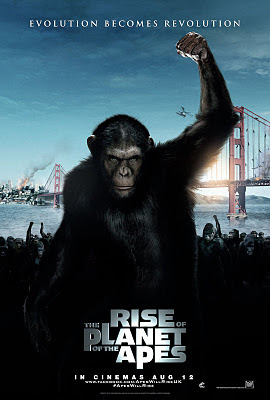 Rise of the Planet of the Apes

I do not have much of an experience with the Planet of the Apes franchise. I know the twist from the first film but the only one that I have seen is the crappy Burton remake. Needless to say when I first saw the trailers for this film, I was intrigued but hesitant in terms of my level of interest. This film came out while I was visiting Bence and Twincess in New York and we opted to see Attack The Block instead of it (Bence was less than intrigued by it). For those curious, this film erases any memory of the Burton film. Yes, it is that good. 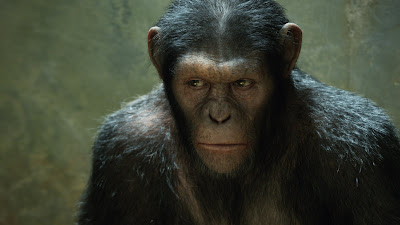 Apes follows Will Rodman (James Franco), a scientist attempting to cure Alzheimer's disease for a Biotech company and has tested the potential gen therapies on chimpanzees. After one of the chimps goes on a rampage, the test population is killed save for one baby which Will takes home. This baby chimpanzee (now named Caesar after the Shakespeare play) shows exceptional intelligence leading Rodman to believe the viability of ALZ-112 as a treatment (Which ultimately costs Rodman's father his life). Things are further complicated in San Francisco after ALZ-113 leads to some unintended results (A virus) and Caesar empowers the residents of primate shelter with ALZ-112.
Rise of The Planet of the Apes is one of those films that nobody expects to do much when it is released. Thus, it is a pleasant surprise when you finally sit down and watch it. With a budget less than most major blockbusters, lessons can be learned about how to create such films. Namely, focus on a great script and you will lay the foundation for everything else. Novel concept... Take notes. Anyway, much has been bandied about with regards to Andy Serkis and his portrayal of Caesar (or rather motion capture). I think this role is hard to categorize as he did the motion capture and while the movements were impeccable, it is hard to say if I agree with the calls for Academy Award nomination. 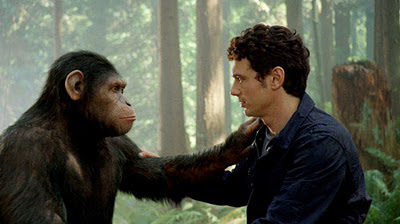 It is safe to say from the first paragraph that I enjoyed this film. I thought overall that it was one of the quickest hundred minutes (or so) of cinema that I have seen this year. What I mean by this statement is that one the credits where rolling I was disappointed that the film had ended. Personally, I wanted to see where Caesar and his followers went from there and the impact of the virus. This was a film that I began yelling at the television for a sequel and then held my jaw in agony (lousy wisdom tooth). All in all, Rise of the Planet of the Apes is a wonderful starting point for a franchise and it is interesting to see where it goes from here.
Posted by Manfred "Manny" Funkowitz at 3:40 PM

Email ThisBlogThis!Share to TwitterShare to FacebookShare to Pinterest
Labels: Andy Serkis, attack the block, Caesar, James Franco, Rise of the Planet of the Apes, Transformer Dark of the Moon