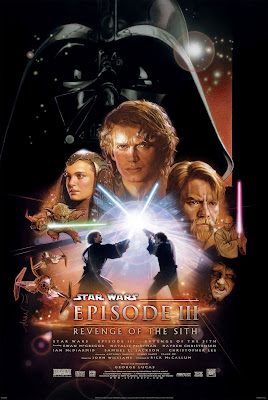 Episode III - Revenge of the Sith

As was evidenced by the past RETROspective post, the previous movie was a slight misstep. While Revenge of the Sith is far from The Empire Strikes Back, it was a step in the right direction. Did it play out how I imagined in my mind when I was a twelve year old boy... Probably not but overall it was a decent movie. Does Obi-Wan riding a lizard or Darth Vader screaming still elicit a chuckle from yours truly? You are damn right they do. All in all, having just completed the "Prequel" trilogy and introducing my oldest to the galaxy that is "far far away," I think that I have made my peace with the trilogy for today's youth. Looks like I am growing up.

Revenge of the Sith is conclusion to the story of Anakin Skywalker's path to the dark side and his participation in removing the Jedi from existence. It also witnesses the end of the Clone Wars and the dawn of the Galactic Empire. Younglings fell victim to the blade of Darth Vader and Padme gets force choked. The film culminates with the fight that any red blooded Star Wars fan has longed to see, the lightsaber duel between Anakin and Obi-Wan. A good time was had by all and the credits rolled.

Having re-watched the prequel trilogy (something that I vowed never to do willingly), I can safely say that it is not as bad as I remembered it. They are not the movies that I grew up with but the children today probably feel the same way about the original trilogy (you are a wise man Hawk). In other words, I think I have come to terms with their existence. While it was not the best Star Wars film that Lucas has directed (that belongs to Episode IV), it is by far my favorite of the preview trilogy. It kind of makes wish that it had not taken two films to get it right... Then again, it does not take much to best Attack of the Clones.
Posted by Manfred "Manny" Funkowitz at 8:59 PM