Now, the Fun Begins Since The Media Coverage Amps up and the GOP is Pressured Into Finding a Candidate that is "Sane" 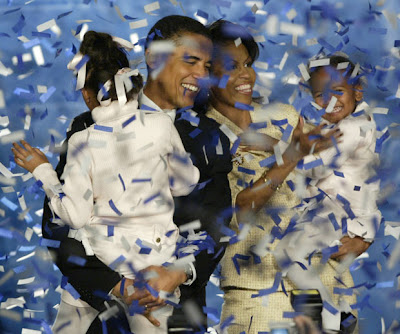 This is not seeming so far fetched.
The first Tuesday in November has come and gone, this means that the Muckraker is moving into 2012 Presidential coverage (I am thinking up a title for these posts) with less than one year before many of us will enter the ballot box. With that said, here we go.

I overheard a conversation earlier were there was a discussion about Obama not being reelected. Certainly, one is entitled to their opinion but that was the long and short of it. This is the question that I pose you all... Who exactly will the Grand Old Party run against him. There has been a cavalcade of candidates paraded in front of cameras and frankly, none of them seems to be great. Flash foward to the very dim hours of this morn and a Yahoo! article exclaimed that bickering on subjects (this time Herman Cain's alleged harassment) help President Obama. First things first... Uh Duh.

Let's return to the candidate cavalcade and the Republicans simply do not currently have a viable Presidential candidate. This is explainable by the fact that the "frontrunner" changes every few days. Why is that? The media has a short attention span, the Republicans began the process far too early and none of the candidates have longevity. This too is elementary, my dear Watson. Whoever is calling the shots at the RNC needs to be fired as they are allowing anyone to run for President. Who is vetting these potential candidates? Evidently nobody. There is nobody that is sane enough to capture the sweet nougat center of American politics... The undecided.

You have extreme Conservates... I mean Tea Partiers (Ron Paul and Michele Bachmann), straight loons (Rick Perry) and people who (allegedly) is a sexual harasser (Herman Cain). Honestly, that leaves poor old Mitt Romney (who I call "catcher..." get it... Catcher's Mitt. Horrible, I know), who will not get the nod because of his chosen religious beliefs (This came up for Lieberman), very progressive of you America. I suppose the obvious question should be asked. Why do you care so much Manny? To be honest, I love politics (natch) and I would like to see the best that either side has (Presidential elections are like the Super Bowl to me... Poor analogy since the Super Bowl is the Super Bowl to me as well) and have them "duke" it out.

However, unless John "Third Time is a Charm" McCain enters the race, I do not see that happening. That was sarcasm. Who am I kidding, we know where I stand on this issue. I bet you guys wish that George W. Bush could have pulled a Grover Cleveland... Damn those pesky term limits.
Posted by Manfred "Manny" Funkowitz at 8:53 AM