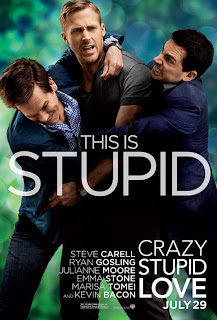 Ryan Gosling and Michael Fassbender are having amazing years. They both have starred in multiple films, portraying completely different characters, and have managed to choose some quality projects. For my money Fassbender has the best performance of the year with Shame, but Gosling isn't far behind with his amazing restraint in Drive. While Drive is easily my favorite Gosling performance and vehicle of the year(heh) his performance here as a smooth talking lothario who trains Steve Carell how to get his groove back is nothing short of spectacular and a testament to his range and gifts as an actor. But I'm getting ahead of myself. The movie in question Crazy, Stupid, Love manages to be a a romantic comedy for actual adults. It is able to funny, and heartwarming without completely treating its audience like braindead idiots, now it is not without its problems, but thanks to some great performances and a smart script the film raises itself above the rest of the standard Katherine Heigl fare out there.

I usually like to start with the performances so let's start there. Gosling is just firing on all cylinders this year, and like I said above each of these performances could not be more different. Here Gosling has charisma to spare as the stylish lothario who teaches Carell the ways of the fairer sex. He has a difficult role, in that the "ladies man who finds the one to turn his life around" is very tired concept, but Gosling breathes new life into it and we never for a minute feel like anything is forced.

Carell is a talented man. His comedic acting is great, but when he does these subdued performances is when he really shines. The guy is funny in his soul so he brings that impeccable timing to the role, but also an amazing amount of soul and emotion to the role. We feel every heartache and reluctance as he goes through the horrible journey of a divorce. Gosling and him make an amazing pair and to be honest I would love the two of them to make more films together as they play off of each other as well as anyone. The two of them really make the movie work and Carell shows that he is much more than a Daily Show correspondent or Michael Scott.

The supporting cast does some decent work, including Julianne Moore as the cheating wife who still loves Carell, and Emma Stone continues to show that she is an exciting young comedic actress. Marisa Tomei is fine and brings a decent amount of crazy, but she was a bit forced at parts. 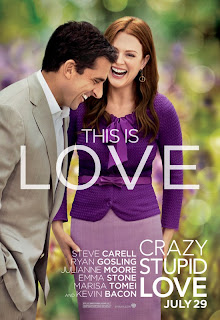 Everyone involved really benefited from a strong script that had just the right amount of wit and cleverness, despite taking some jobs at my alter egos longtime employer. My biggest gripe with the movie comes from the climax. The movie builds until everyone comes together and emotions fly back and forth as secrets and feelings and identities come to light. As the emotion manifests itself into physicality the scene becomes hilarious and entertaining, but sadly a bit convenient for everyone involved. I felt as if the writer needed to begin wrapping the movie up and so they brought everyone together despite no previous knowledge of the relationships involved. Again it's a small problem, but one I keep thinking about.

The title of the film should give you an idea as the subject matter. The film praises love in all of its glory. Whether it be the crazy the stupid or the overwhelming life changing perfection that is pure love, the film treats each aspect with sincerity as it explores how love can be so many things to so many people. It takes pride in the confusion and heartache that love creates as well as showing just how powerful love can be, whether it is a little boy crush, the love of your soul mate, or finding the one person who can actually make you want to settle down. This is not the most positive film, but I would venture to say that the hopeless romantics out there will get more out of it than you cynics. The directors take us through all these aspects of love over a two hour period and really dive deep into the emotion in subtle ways that most would shrug off, it is a complex story with more layers than is seen at first glance. I really enjoyed this film, and is a great film to share with your loved one.

One last thought - was Kevin Bacon always this badass?
Posted by Bence at 9:09 PM