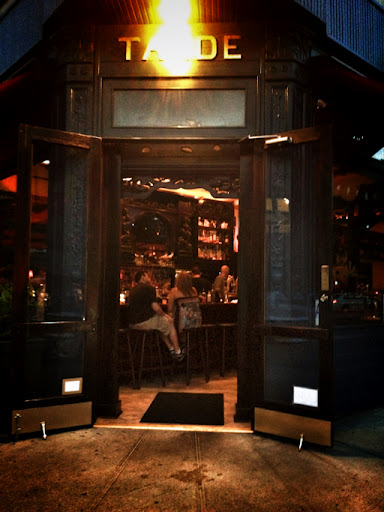 On the south end of Park Slope reality television star, Dale Talde, is blowing culinary mind holes with his unique take on Asian Fusion at his eponymous eatery, Talde. This isn't the mad scientist fever dream of molecular gastronomy like Wylie Dufresne, nor is it the classical perfection of Thomas Keller and Eric Ripert. This is inherently Brooklyn with its focus on the familiarity of family style dining, but just like the greatest of the five boroughs the restaurant dances to the beat of its own drum. It mixes the familiar with the rebellious so well that each dish is at once calming and comforting, yet unique and absolutely riveting in its original simplicity. I am pleased beyond belief that the first true restaurant review is that of one of my favorite contestants, and local to the neighborhood I've called home for the past few years.

Talde has a casual feel to it, from the playful bar outfitted in rich mahogany with Asian accents, like numerous Buddhas, and a dragon sporting a baseball hat. It's relatively small, with no more than 20 tables all in a row, they do a wonderful job of never making you feel cramped, which for New Yorkers is often an inevitability at any hotspot. So while Talde was absolutely crowded on this Saturday night, you never got the feeling you would bump into your new neighbor. There is an open view to the just as small kitchen with Talde himself on scene shouting out orders.

While we waited for our table, we helped ourselves to some of his liquid concoctions at the bar. The moment Twincess got her watermelon margarita we knew we were in for a culinary experience that would challenge our expectations of flavor. Again Talde isn't a magician serving you sleight of hand dishes, rather he is simply approaching favors in different ways. What was so special about her margarita? Well aside from it being expertly made, the giant watermelon slice that hung on the side of her glass half submerged in the alcoholic wonder was coated with salt and pepper. It's a simple mixture and of course salt and pepper are in hit about every dish. But salt and pepper on the watermelon, it was absolutely heavenly. A refreshing bit of savory to balance the sweetness of the triple sec and watermelon juice. It's not altogether crazy, but it's something I've never thought about, and it's the kind of minor tweak that continued throughout his meal that made this one of the best dinners I've had in New York. 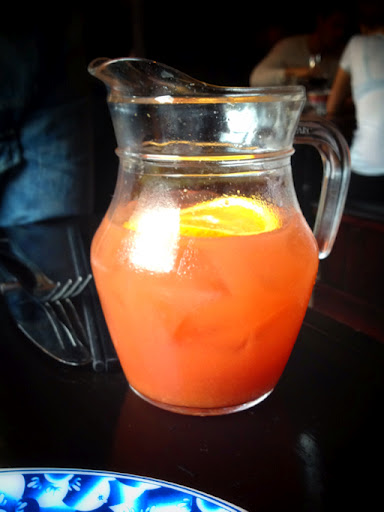 After we seated we had a few appetizers and a pitcher of Obama's Punch. The drink was another simple, boozy mixture accented with some high quality vanilla and blood orange. I had read another piece naming the dumplings here the best in the city. I'll be up front and say that my dumpling knowledge is not the best from a diversity standpoint. I've been to Anita Lo's excellent Rickshaw Dumplings, but beyond that nothing more than some mediocrity filled local joints. That being said the pretzel an pork with chive dumplings were brilliantly done. The technique on the dumpling yielded a texture that can only described as some paradoxical amalgamation of both steaming and frying. The dumpling had a perfect crust while still being moist and light. The filling itself was a celebration of pork with just a subtle hint of chive. What would a pretzel be without the salt? Well here the exterior had sea salt sprinkled over it an the slight crunch added the perfect amount of salt to bring out the natural flavors of the pork. It bears repeating this is nothing crazy, all he did was sprinkle salt over a well made dumpling, but it's something I've never tried and when you match that with his perfect execution it becomes a revelation. The sauce itself was a spicy mustard, which he played down the mustard seed and punched a creaminess that was never overpowering. Our other appetizer was a collection of three sliders, a mushroom slider, a fluke that was fried, and a ground pork. Each one was masterfully created. Twincess preferred the fish, which was lightly fried to give a crispy exterior and perfectly flaky interior. Myself on the other hand felt his pork slider could be in the running for top five burgers of all time, joining the likes of Boulud's absurdly expensive burger(incredibly decadent) and the amazing burger from Bloomfield at The Spotted Pig. The pork slider was grilled to perfection and had a spiciness to it that instantly brought memories of a delicious chorizo to mind. 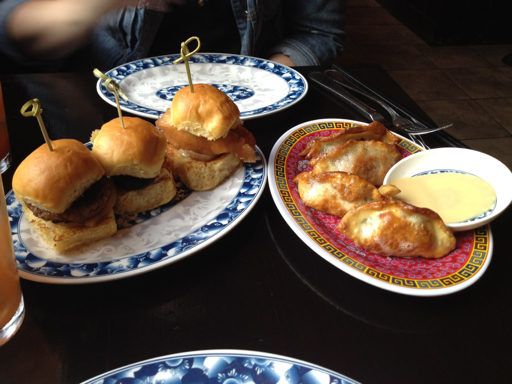 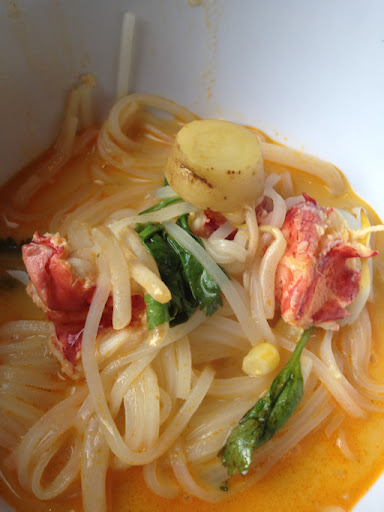 Then the main courses started to come. We indulged ourselves and decided on noodles in a spicy lobster broth. First off, I live David Chang and think his collection of restaurants are fantastic, but the reign of Momofuku being the cool noodle house is over. Talde brings a spice with authority, and it's refreshing. He pushes the spice, but never lets flavor take a back seat. Instead the two marry beautifully and with a little more Obama Punch, you're sure to have no problem taking down this bowl of creamy spicy broth tinted with some amazing lobster. 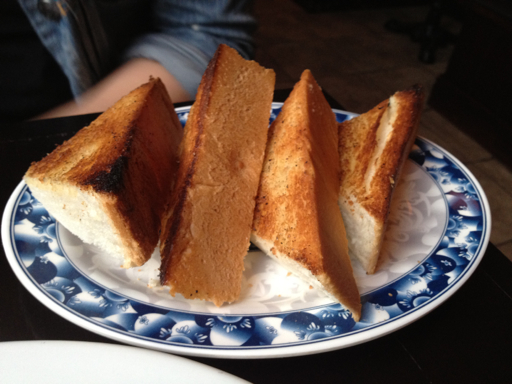 To cap off our savory dishes we had the Korean Fried Chicken with a Kim chi sauce, some black pepper toast on the side and some banana leaf fried rice with Chinese bacon. I must say I never had fried rice like this, the texture was much closer to a risotto than I would have thought. Definitely delicious, but amidst the sea of culinary brilliance it never reached past being a minor footnote to the amazing experience. Now before we get to the fried chicken I have to mention the toast. Now I have to praise the guy for being audacious enough to place toast on the menu. I knew there had to be a reason to have toast as a side dish so I ordered it out of mere curiosity. What we got was an upscale version of Texas toast. Thick sliced bread perfectly toasted on one side and soft in the middle. Seasoned with salt and pepper it achieved a great balance of flavor and added a nice texture to the meal. I still don't know if it warrants a place on the menu rather than just bringing it to the table, but it's nice that it is more than just an after thought of bread thrown in a toaster. 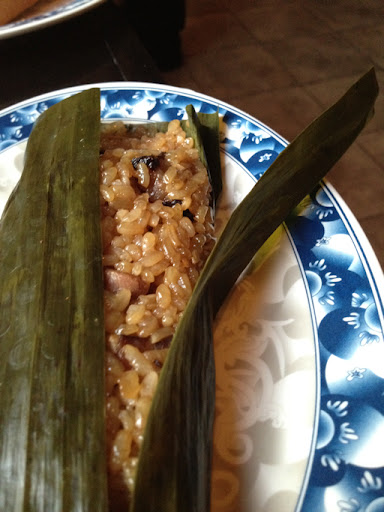 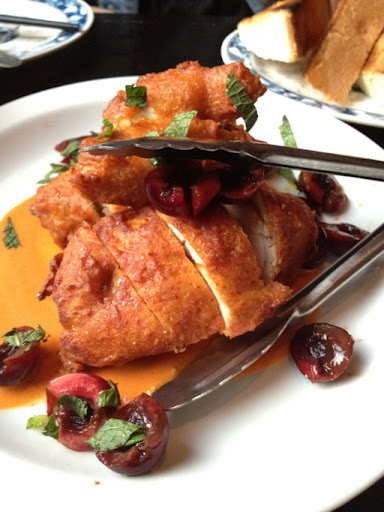 Then we have our Korean Fried Chicken with a Kim chi sauce. By now you should know that everything was on point. The chicken was fried perfectly with an amazingly crispy skin with a strong helping of vinegar. The sauce added just a bit of spice and some delicious pickling flavor to go along with the strong but not offensive vinegar flavor of the chicken. He sprinkled cherries and mint around the plate and as far as I could tell the cherries were simply cut an thrown on the plate raw, they were refreshing and added a sweetness to the dish to give the overall meal some great complexity. With the crunch of the chicken, the sourness of the sauce and the slight spice, the sweetness of the cherries were right there sealing the deal that Talde has such an elevated understanding of flavor that he is able to create such unique yet simple dishes. One of the best meals I've ever had, and everything about was easy and familiar. 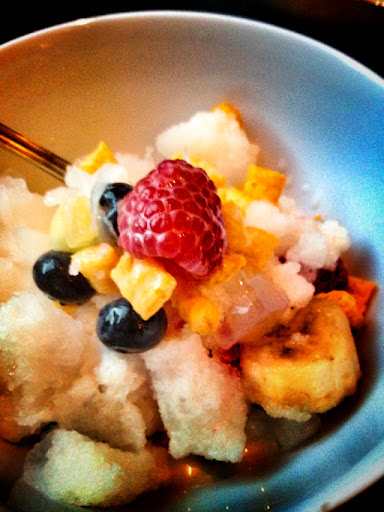 One last thought - I couldn't forget about dessert right? Only one option, the Halo Halo. Shaved ice, sweetened milk bubble tea, fresh fruit, candied coconut and Cap'n Crunch combine to create the most absurd bowl of cereal you've ever heard. The complexity in the dish is astounding and if we all had this to eat growing up before school I think there would be no war. Yah that's right Halo Halo would breed peace.