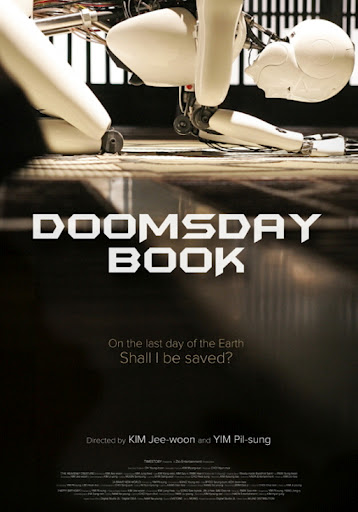 I was lucky enough to venture out to the New York Asian Film Festival for at least one movie. Knowing my time constraints I made sure it counted so of course I went for Doomsday Book, an anthology film from Yim Pil Sung and Kim Jee Won. The film has been caught up in developmental hell for quite some time, with there originally being three directors, but ultimately falling to these two gentleman to collaborate on the last entry. The film gives us three very different stories about the end of the world. With some incredibly drastic tonal changes from film to film it would be easy to say that the films are disjointed. To those I say, why not think about what you're watching for once. Anyone who read my Prometheus knows I hate when people chastise a film for not spoon feeding them meaning and resolution. 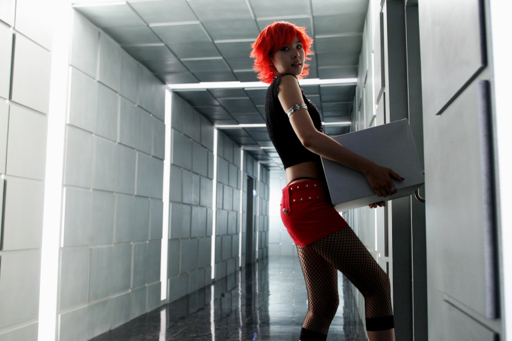 Having said that, the film is far from perfect and like Prometheus I feel like this could've been a masterpiece, but the films themselves are uneven, and for me that it is ultimately what held me back from loving it. It's a hard film to discuss since the films are so drastically different. We really have an incredible meditative piece on faith and humanity sandwiched in between slapstick horror. That's not to say the outer pieces are bad, but they definitely are not as concise and well executed as the middle piece, which of course is directed by Kim Jee Won. Alright let's get into the films.

Like I said, it's easy to write the movie off as disjointed, well I beg to differ. I think there is a distinct line from beginning to end with each of these films. Each one can stand on their own, with each one touching upon a multitude of issues and brimming with symbolism but there is a simple thread through them all. This film follows the fall of man at our own hands as we destroy god and bring about our own destruction with our growing pride and recklessness. A strong statement to be sure, and I think the execution falls short of what this theme could have accomplished on film. 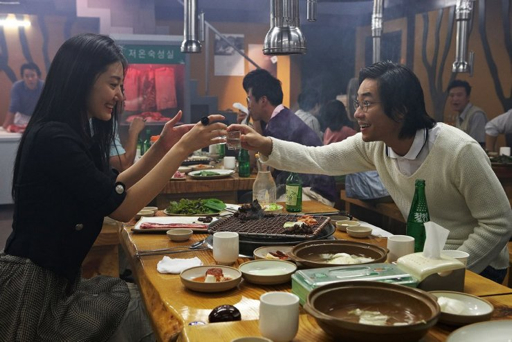 Let's look at the first film, Brave New World, which tells the story of a zombie apocalypse brought on by a virus seemingly caused by rotten fruit mixed with meat. Quick side note, one of the many sisters Funkowitz is visiting at the moment and wanted to watch a film the other day. Twincess wanted a comedy, and Sister 4 shouted out "Contagion!" Well, it would seem this is the film for her as we follow the virus from conception in Patient Zero all the way as it destroys humanity. This is the least successful for me, as the slapstick is just too absurd and cheesy for me. I constantly had the feeling that I didn't get the joke. As the movie went on though, the director seemed to find his footing and more of the comedy was landing properly. I loved the way news shows were used to show the sensationalist nature of TV news and how nothing is objective anymore. These scenes provided some of the biggest laughs and rightfully so. 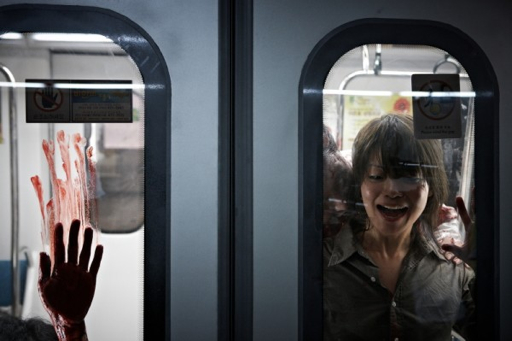 The film explores a family unit decomposing much like humanity around them. We see people devolve into beings driven only by lust and hunger and ultimately destroying one another. There is some pretty overt religious imagery here, again I was there and then they quoted the bible at the end of the film and I felt it ruined it. Apple imagery, we all get it. 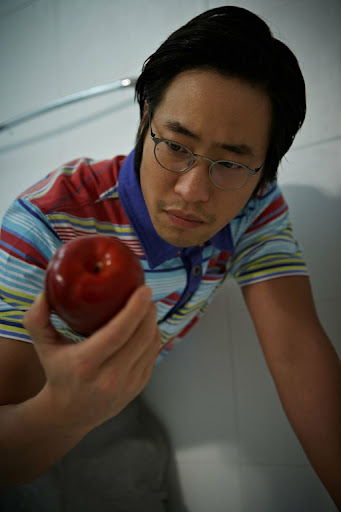 There's some strong work there and it could have made it work even with all the comedy. Like I said by the end it had found a good balance but in the beginning it was just flat. People eating beef on a date and making orgasm sounds is not funny, neither is throwing out the trash and showing off the contortions you can make in your face. Easily my least favorite piece, but it ultimately sets us off on the journey we're about to take. It shows us mankind before the downfall and then the mistakes that bring about the end of the world. By the end of this piece the family unit has been abandoned, humanity has become creatures driven by urges, and the media only cares anout whose fault it is. This leads straight into Kim Jee Won's piece. 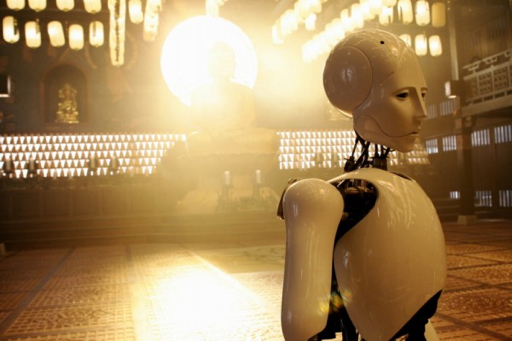 The Heavenly Creature is the story of a robot who has gained consciousness and achieved enlightenment at a Buddhist temple. A tech is sent to investigate the robot and much of the film is his internal struggle of whether he should deactivate the robot as defective, as his superiors wish him to do, or let him live. I'll be upfront, this is the section I was most looking forward to and it is easily the best segment of the three. Kim Jee Won takes a meditative look at faith and the soul and what it means to be human. It is deliberately paced and gorgeously shot with some extremely philosophic dialogue. But honestly you can get all that from the trailers. 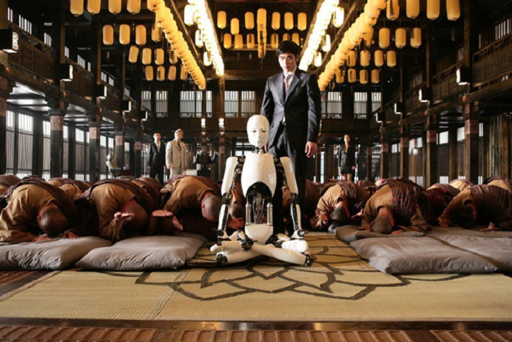 I want to look at how this piece fits in with the two pieces book ending the picture. It is obviously a drastic tonal shift from the first film with its extreme slapstick mixed with gore. Here we really have two locations and a lot of talking. The film shows us a world in which humanity has all but killed faith. Not only that but man has created life, and that life has surpassed them in their abilities at being human. The robot is far more enlightened than anyone in the film, the monks see this and praise him. The corporation sees him as a defect, a perfect metaphor for the state of life they are in. That humans are there own god, able to give life or take it away as they see for. We see this again mirrored with the young lady and her puppy. Once the puppy is fixed she decides she no longer wants it, it is a continuation of the zombies from the first film in a manner of speaking. These are creatures driven by impulse and desire and make changes on a whim without any regard for anything else. Sure they're not eating anyone but the connection is there. In this world, mankind has destroyed faith, and thus destroyed his soul. This is about the end of the world on a spiritual level and the ongoing internal struggles between those who still want to believe and those who believe in mankind as gods. The last piece, Happy Birthday, was directed by both directors and you can definitely feel more restraint here than in the first film, no doubt thanks to Kim Jee Won. This film tells the tale of a meteor ordered by a little girl on accident and it's impending crash on earth. This is again a darkly comic entry, but nowhere near the ridiculousness of the first film. Again we see the use of news as a "chorus" of sorts, although this time the satire is not present that was there in the first film, but they still provide some of the biggest laughs of the film. 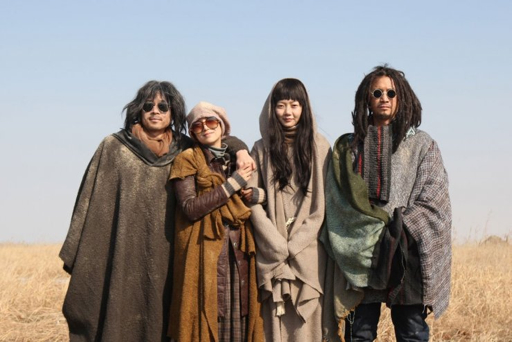 This film takes that family unit we saw in the first film and pieces it back together. If the first film showed us a family decomposing like humanity around them, this film shows how a family unit can survive anything. We are still presented with humanity as beings of desire from the newsman, to the lazy family these are not people attempting to be pillars of society. Yet the family loves each other deeply, and they would do anything for another. After the meteor hits and the little girl dares to step outside, there is again religious imagery as we get a three wiseman and Mary( fine two wisemen and a mom) tableau as the light peers in from the outside. Even the lines at the end, obviously symbolic, are nowhere near as pandering as the Bible quote that ends the first film. This is a film about living through tragedy, and persevering through it all. This is about being able to rebuild, and how at the end of humanity, perhaps family is what will ultimately save us all.

An incredibly intriguing exercise, that sadly could've used some more time on the editing table. Or maybe I just didn't get the joke. Either way, it chronicles the fall of mankind in a way I have never seen. These films are each so different and force you to think about the threads that connect them to each other. It is challenging material that is betrayed by some juvenile work in the first film. 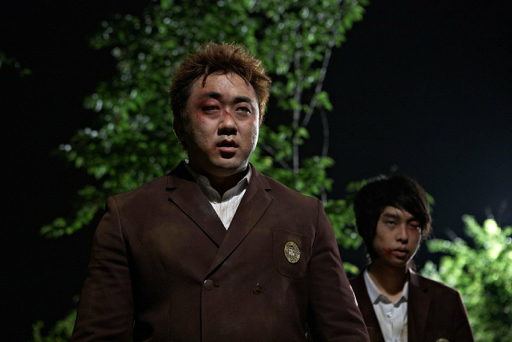 One last thought - this was a great contextual joke.