New York FIlm Festival Day 5: The Skin I Live In 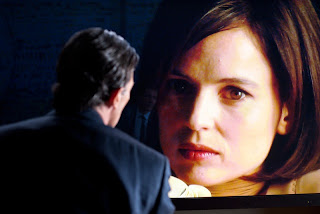 Ok so if seeing Cronenberg and Fassbender joke around on stage was the coolest into I've seen, Almodovar's lengthy introduction and Banderas' "weird, delicious laughter in your mouth" was by far the most fun. Almodovar is so in love with cinema that it bleeds into every frame of his films. The artifice, the wonder, the sexuality, the music, all of it obsesses him and he celebrates that with each film he makes. In his introduction he name checks Fellini, and Hithcock, and while he was not discussing them as influences it's clear he was using them as inspiration. 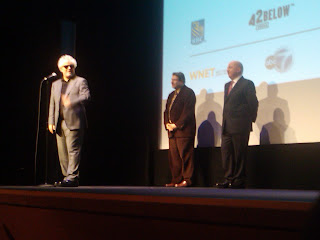 This Almodovar trying his hand at horror. Filled with Hitchcockian tension and dread, and a Fellini style playfullness and absurdity. But through that all, it is absolutely an Almodovar film. It is fun, and disturbing, a celebration of the female form and one man's attempt to perfect it. It discusses the parental bonds both paternal and maternal, it reevaluates gender roles much like other Almodovar films such as Bad Teacher and Talk to Her, and above all it is insanely entertaining. 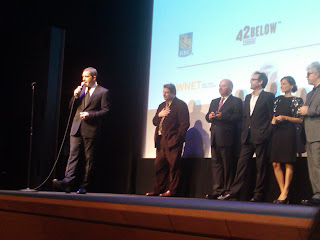 The Skin I Live In tells the story of Robert, a brilliant surgeon obsessed with skin research. He has a prisoner in one of the rooms of his house which he has been using as a test subject for years. The film tells the story of how this relationship begins to fall apart, then flashes back and tells us how this relationship began. Now I wouldn't say there's a twist, but saying anymore would ruin the joy of discovering this movie as it progresses. Almodovar is a creative force, telling stories that I have never heard before, or taking a simple story and completely going against the norm. Here we have a riveting thriller full of psychopaths and torture and some stockholm syndrome for good measure. 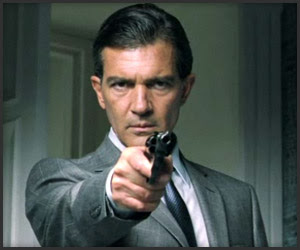 I said it before in my preview, but Almodovar gets an amazing performance from Banderas. He is at times, cold and calculating, and others fighting back frustration and anger, and always just a tad on the insane side. His brother on the other hand, quite literally revels in the animalistic side of insanity. Giving into all of his primal urges, the two create polar opposites within the film. Banderas commands the screen, even when faced with a large man wearing a tail and full body tiger outfit, Banderas owns this movie. 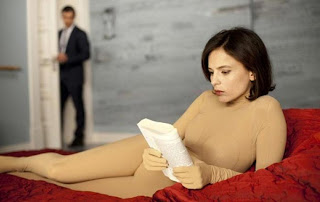 Elena Anaya is the prisoner, and her performance is one full of wonder and discovery. When we meet her we have no idea how long she has been locked away. She moves about her room in her flesh colored leotard with a feline ease. Her first encounter with someone other than Robert is full of confusion, and when she finally manages to have a day out we see the reluctant excitement play perfectly across her face. Like she's not entirely sure if Robert is actually letting her have time outside her room. She nails the dark comedy perfectly, filling her dialogue double meanings and sincere ignorance. 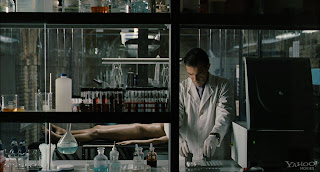 Now I mentioned that Almodovar referenced Fellini, and Hitchcock in his introduction, the contest was that you cannot mention those filmmakers without thinking of the wonderful music of Nino Rota and Bernard Hermann. Likewise, Alberto Iglesias has been an important part to Almodovar's films for years now. The music at the end of Talk To Her continues to stay with me and any time I think of that film, all the images are put to those final moments. Here he adapts his style and blends in modern and classical influences, giving us a very appropriate Frankenstein's monster of classic horror dread, and modern thriller. The music blends with the image perfectly as always, and reminds us that no one is capable of properly making melodrama quite like Almodovar.

This is another film that I could keep going on and on about. From the gorgeous set design, to his impeccable subtle camera work, taking us from the cold and perfect world of Robert's house to the dirty and depraved barn in which our prisoner is first held. Almodovar plays with duality in a way similar to Cronenberg, showing us the perfectly clean and thought out world of Robert's surgical practice, then we see his barn which has a myriad of rusty blades and scythes, telling a story all their own. To Elena and Robert's relationship which, evolves rather shockingly over the movie. The acting, the cinematography, the music it all creates one of Almodovar's strongest works. This is not the high water mark of Talk to Her, but is easily one of my favorite, as of now right behind Talk to Her. This is Almodovar returning to the dark comedic absurdity that drenched his earlier work, mixed with the master of form he has become in the last decade. A culmination of all his talents to create one of his most fun pieces of work, a creepy psychotic enjoyable horror story with a dark comic edge taking us to some horrible places and forcing us to have the weirdest sense of laughter...in our mouth. 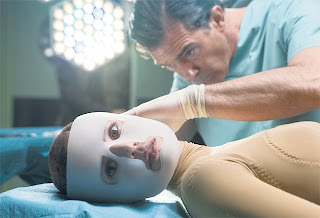 Email ThisBlogThis!Share to TwitterShare to FacebookShare to Pinterest
Labels: Antonio Banderas, Elena Anaya, Pedro Almodovar, The Skin I live In