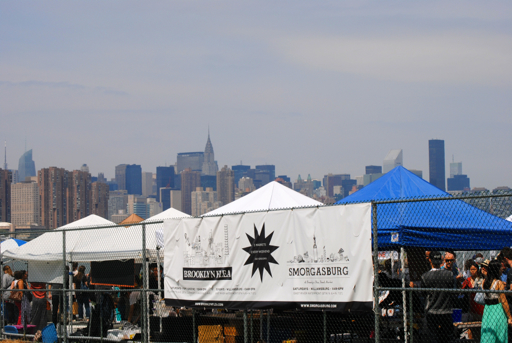 The Brooklyn Flea, which has long been a hipster rendition of what flea markets could be, ventured into the food game last year. Launching Smorgasburg to great acclaim, the Saturday food fair has grown to include a wide variety of food representing different cultures and a dedication to the power of quality ingredients. Twincess and I finally made our way out to Williamsburg to enjoy the culinary delights that the Smorg has to offer. If you remember from last year we are huge fans of the Food Truck Rally so hearing about this collection of eatery stands located in hipster central intrigued us. 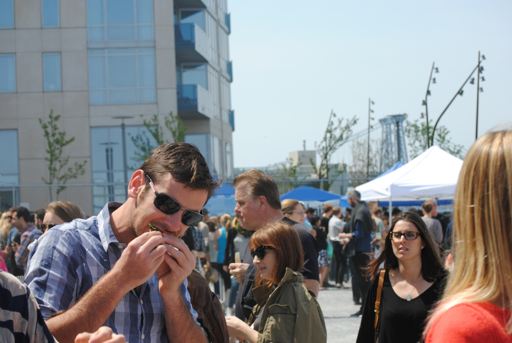 Like the food trucks there is a focus on ingredients, either locally grown, or organic, or grass fed, or homemade even to the obscure(grapefruit jalapeño soda anyone?). The big difference here is that there were just as many stands offering food on the go, to stands offering their own products to take home. There was jerky, preserves, sauces, coffee beans, and horseradish to name a few. The logistics of having a stand and walking up to a food truck obviously offer up different challenges. Perhaps the biggest difference, which in turn had the largest line, was the full size smoker serving up brisket by the pounds. Unfortunately the line proved to be stronger than Twincess and I, but fear not we sampled many an item. So I'm going to break it down into savory an sweet, even though we jumped around quite a bit. So let's start with the savory. 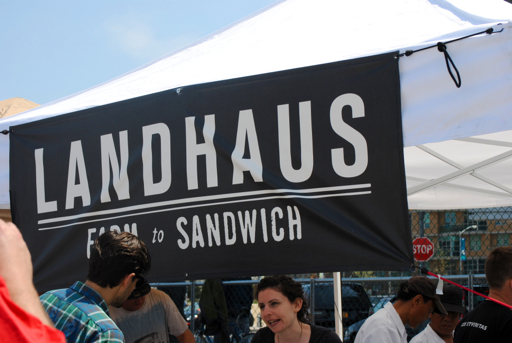 The first stand we checked out was Landhaus, an operation dedicated to bringing fresh meat straight to the table. Their slogan is even "from the farm to your sandwich." While they had a few sandwiches to choose from, the big draw was their BLT. So we ordered that and a "maple bacon stick." 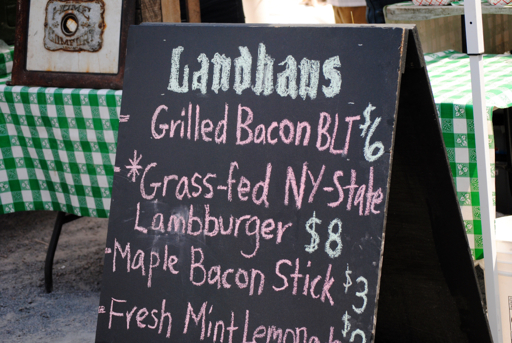 The bacon stick is exactly what it sounds like, and just as delicious. This is maple glazed THICK cut bacon sprinkled with spices and grilled on a flat top. I can't stress enough how thick the bacon is, it might as well be pork belly. The result is a crispy piece of bacon with a meatiness too it, really allowing you to taste the pork in all it's glory. The maple adds the slightest bit of sweetness to it, playing off the salt nicely. Now as good as the bacon stick is, it is a tad gimmicky, the really all star is the BLT. 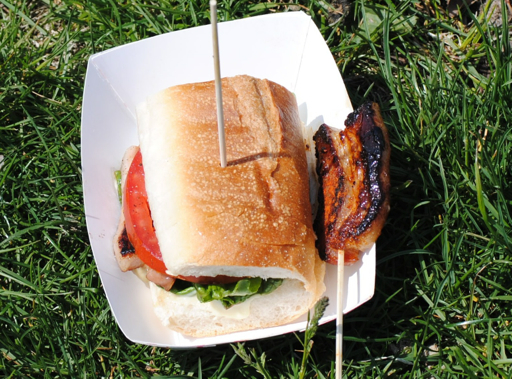 Remember when I said thick cut bacon, well this is intense to a new level. Add to that fresh lettuce and the most beautiful red tomato sliced perfectly to match the bacon all served on a piece of bread with some aioli. This was a perfect sandwich, the bacon obviously the main player, but the tomato added enough acid to soften the saltiness of the bacon and create a great marriage of flavor. This is all coming from someone who actually doesn't care for the BLT, but this blew my mind. 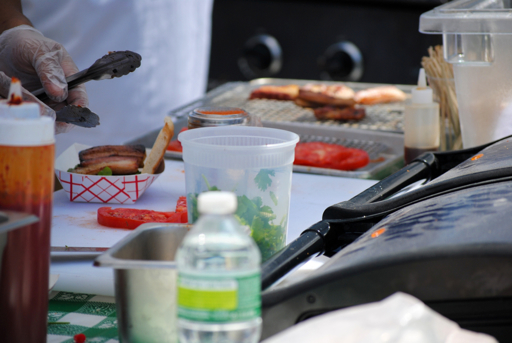 Next up was tamales from Solber Pupusas I had a big problem with the masa here, mostly it was soggy and not set up properly. The filling was fine, and the coleslaw was actually very delicious with a nice tang. I just have an issue when you serve tamales and the masa isn't as good or better than your filling. The masa needs to be the focus and it should have flavor and the proper texture, loose an slimy is not for me, not inedible but the most disappointing meal of the day.

Quick stop for RC's favorite...Red Hook Lobster Pound. What can I say, the boy has expensive taste. For those of you who haven't had the pleasure, the lobster pound serves up the best lobster rolls around. We always get the Connecticut roll which is bathed in butter and scallions rather than mayo. This is simple and straightforward and delicious. I can't say enough about it, it's been a favorite of ours since we moved out to NYC. 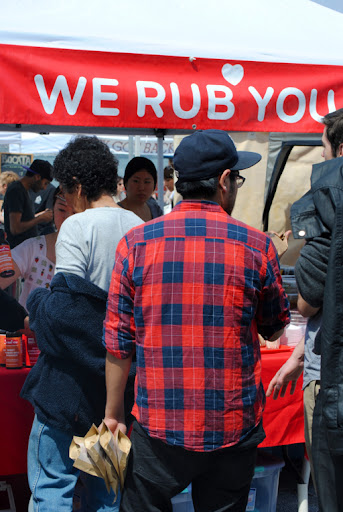 Next up in the savory department was We Rub You, Korean BBQ in between two pieces of bread, as well as bottled sauces. You could smell the deliciousness five stands down as cooks chopped up marinated beef for the bulgogi on a flat top. 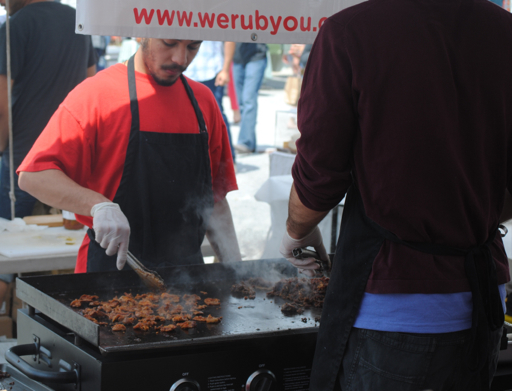 The bulgogi was perfectly grilled with a slight char and incredibly juicy. With garlic and soy and scallions permeating every bite. The cole slaw was the right amount of crunch and freshness to play off the richness of the beef all topped with a spicy chili sauce. The beef and coleslaw were so delicious on their own I don't think they needed a bun, add to thy the fact that they piled on the food, there was no way you could eat the meal like a sandwich proper without it falling all over the place. 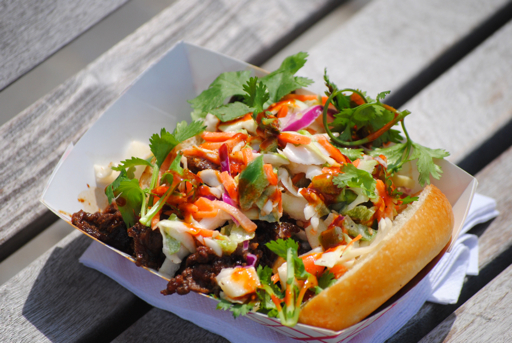 So by the time you could close the bread, we were content enough just eating the bulgogi with a fork, still able to get cole slaw in each bite. Small complaint, but balance is so important in crafting a sandwich. 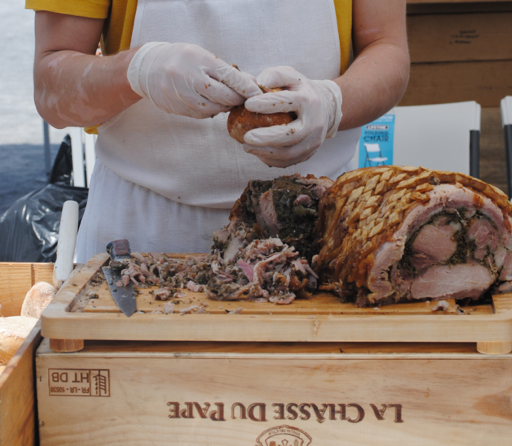 Last, but not least(although by this time we both were stuffed) was Porchetta. Quite possibly the most straightforward stand there. A place called Porchetta you'd expect them to serve what else? Exactly, porchetta. They put the meat up on a pedestal and carved it right in front of you so could see the savory masterpiece fall apart slice by slice as they filled bread with their tremendous pig. Stuffed with garlic, parsley and some other herbs the pork was cooked perfectly and even sitting out was incredibly moist(not juicy, moist). And with quite possibly the most confident presentation they serve it to you in between a small roll. And that's it, no vegetables, no aioli no mayo no balsamic drizzle. Just the meat and the bread. You can see how delicious it was. Amazing honest work. Truly honoring the pig here with some masterful cooking.

So that does it for the savory part of journey. Tough choice, but I'd say Landhaus takes the win for most delicious savory item we had. It was by far the most balanced sandwich, and each piece of that sandwich sang beautiful notes of deliciousness. All snug inside of two pieces of crispy bread. Great food all around, but elevating a BLT simply by using the best possible ingredients is cooking in simplistic brilliance.

Without further ado we reach the sweetest part of the article as we dive into various pastries, and popsicles. We'll go in order again. 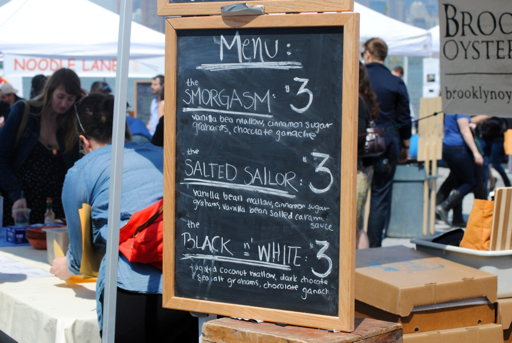 First place we arrived at was S'more Bakery, which served the ultimate gourmet campfire treat. S'mores have long been a favorite of Twincess so we were both elated to try out the high class version of the childhood snack. Before we even get into this, have all of you tried homemade marshmallows? They are infinitely more fluffy and full of flavor than their store bought counterparts. Once you try them(any of them, in fact they are relatively easy to make) you will never go back to the dry styrofoam we feed everyone on our camping trips. Enough digression, S'more Bakery makes the treat a delicious dessert full of layered flavor. 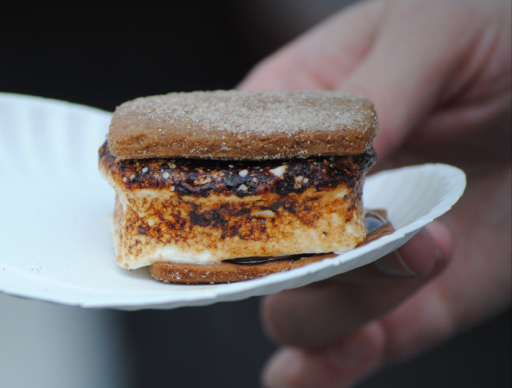 We had the charmingly titled "s'morgasm" a madagascar vanilla and bourbon marshmallow sandwiched between cinammon honey graham crackers, and some semisweet chocolate ganache. They torch each s'more to order and the result is an irresistibly gooey, welcoming warm treat. The marshmallow is charred on the outside and as you eat it the inside spills out to blend with the chocolate in a marriage of sweet decadence. 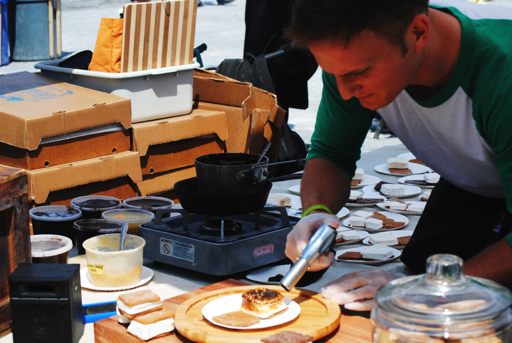 The cookie plays off the two celebrating the cinammon more than the sugar, letting the marshmallow come through with the necessary sweet notes. I am not a huge fan of chocolate, but when used sparingly as it is here, it creates a symphonic dessert of pure childhood whimsy. Overselling it? Well that just means you haven't tried it 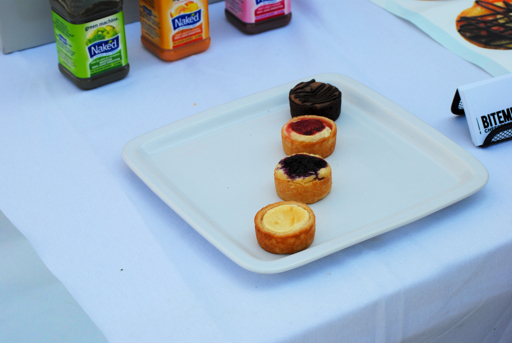 Next up was Biteme, a collection of mini cheesecakes. I still think this is a great idea, but like mini cupcakes, it's hard to get the right consistency at such a small level. We went basic here and tried an original and a chocolate lust. They both were fine desserts, with the original being the stand out, the chocolate reminded me much of fudge than anything else, while the original had a nice texture and creamy flavor that I want from cheesecake. They both seemed unable to have a successful crust tasting much more like pie crust than any sort of graham cracker or other cheesecake crust. 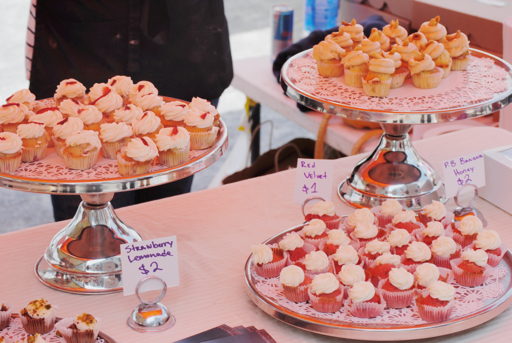 What better way to follow up mini cheesecakes than with what else? Mini cupcakes. Kumquat Cupcakery offers up a variation on the trendiest dessert of the past decade. They had the ubiquitous red velvet, a whimsical play on peanut butter and bananas, and of course a signature donut in the guise of a Maple Bacon concoction of savory and sweet. For me this was far more successful than Biteme, for one the texture of the cupcake was moist and light while being infused with quite a bit of flavor and not just sweetness. Their cream cheese frosting was very well made and I can only assume their red velvet was a decent addition to the millions out there. RC managed to inhale the cupcake before we could have a try. The peanut butter banana was very good, managing to blend the favors nicely while still tasting like a cupcake rather than banana bread with frosting. 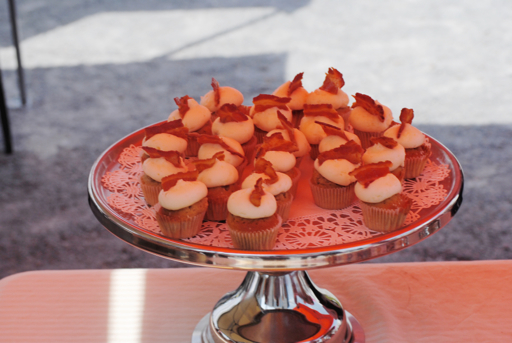 As for the bacon cupcake? Well you know I'm a fan of bacon from my talks of Landhaus, I mean who isn't? It was delicious. The bacon flavor had been baked into the cake so each bite had this amazing blend of sweet and salty that married perfectly with the frosting on the top. All this with the slightest bit of maple flavor combined to make an amazing bite sized dessert, albeit with one major flaw. The bacon garnish was soft and flaccid. I don't know if it was meant to be or simply because it was resting inside of frosting for so long, but the garnish needed to be crispy. It would've added a new dimension in texture that could've made this one of the highlights of the day. All in all a delicious bite, that could have been sublime. 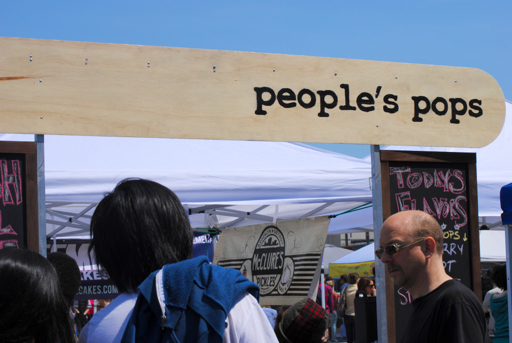 The last bit of sweet delight came from a request by RC for a popsicle. The boy loves his fresh fruit Popsicles, so seeing the stand for People's Pops, excited him completely their collection of favors offer up various combinations of fruit macerated and frozen to make a deliciously healthy snack. They also offered up fresh Italian Ices, we however, opted for the strawberry rhubarb. A perfectly tart dessert that was both slightly sweet and refreshing. 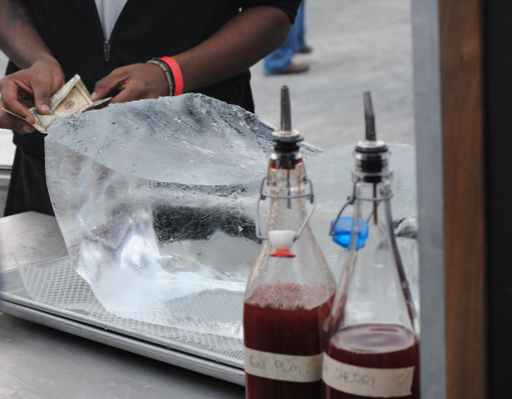 That does it for the sweets, and the winner of most delicious dessert? Absolutely without question S'more Bakery. The cupcakes had a chance and blew it with some limp bacon, as for the Popsicles, they were good, but not even close to that perfect S'more. 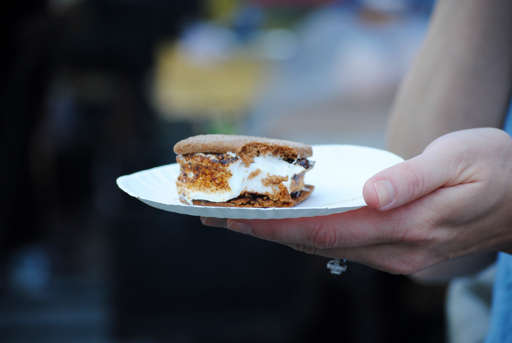 It was an amazing day filled with delicious food, and like the food truck rally, I imagine this will be one of our favorite spots for some culinary adventuring. So if you're in the area you should check it out on Saturdays at the Brooklyn Flea in Williamsburg. Let me know what you think. I'd love to hear what your favorite was. Comment down below or find me on twitter @bencemaus. 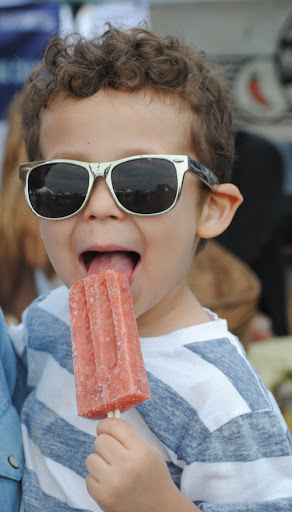 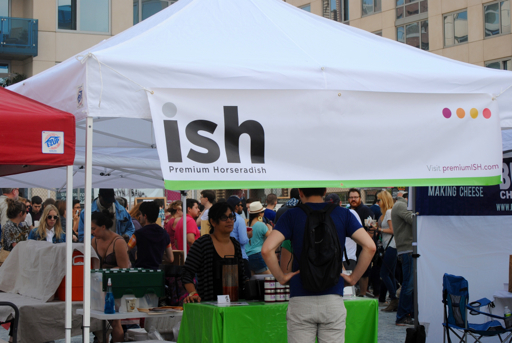