"They Shall Bend the Knee or I Will Destory Them:" The North Remembers 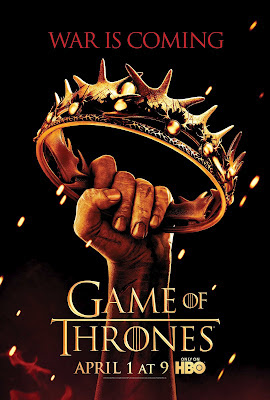 Game of Thrones: Season II
Outside of the The Dark Knight Rises, there are very few things happening in 2012 that excite Manny Funkowitz as much as sthe premiere of Game of Thrones: Season II. I place the blame firmly on how astounding well-written the source material was. It certainly made for a rough eight months since I first watched the series and about one month since the show in preparation for this premiere. It was not until Sunday afternoon that I wholly realized that it might not live up to my expectations, especially since A Clash of Kings was quite the work of literature. Did the first episode live up to my unrealistic expectations? It came pretty damn close. 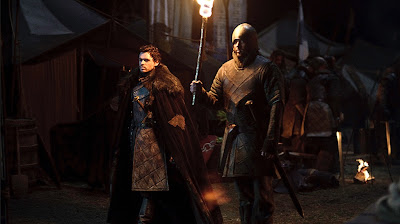 The war for the Iron Throne is just beginning with Robb Stark and the North are off to a quick start. House Lannister is in relative disarray with the Kingslayer in the hands of Robb Stark and Lord Tywin Lannister fighting to free his son. To make matters worse, Stannis Baratheon has sent a letter to all four corners of Westeros detailing the incest between Jaime and Cersei Lannister which resulted in three children. As a means of damage controller, Tywin has dispatched his son Tyrion to ensure that the sadistic King Joffrey can hold onto his throne. The episode drew to a close with Daenerys sending out riders to discover an end to the red waste and gold cloaks killing all of King Roberts bastards.

"The North Remembers" certainly crams a lot of information into the span of fifty-two minutes. It introduces the audience to a slew of new characters, while also simultaneously juggling the need to provide established characters with screen time. While this resulted in some character development issues, after watching the episode for a second time last night (Lady Funkowitz passed out the first go round), it was not as glaring as I first thought. Sure, we were not provided with the background of the Onion Knight but there is nine more episodes to flesh out such characters. It should be noted that at no point was I "crossing things off a mental list" of things to cover during the season. 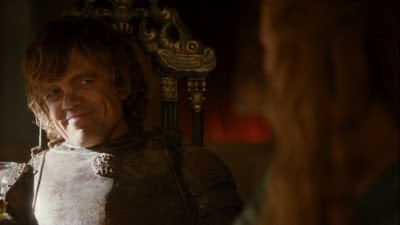 Overall, Game of Thrones was able to maintain the quality of season I, while also offering a foothold for stepping out of the shadow of its predecessor. It speaks to maturation of the show, its content and the actors growing into their roles. Of course, Peter Dinklage was stellar in his portrayal of Tyrion Lannister and somehow he seems to be getting better in this role. Yet, it would also be doing a disservice to not mention the talents of Richard Madden or Nikolaj Coster-Waldau who provided an added dimension to both Robb Stark and Jaime Lannister respectively. All in all, I am curious to see where this season goes without the fear of it pulling a Boardwalk Empire.
Posted by Manfred "Manny" Funkowitz at 10:24 PM