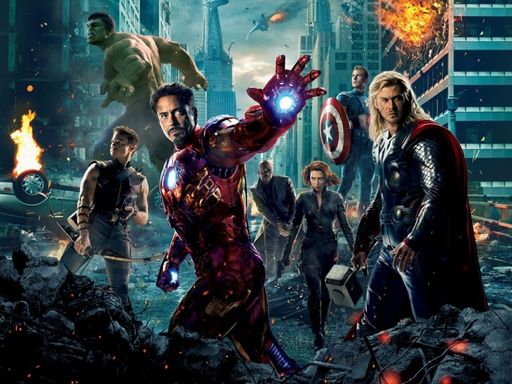 I remember growing up playing super heroes with my friends. We always would come up with the most insane ideas possible and play out our scenarios in someones backyard just letting our imaginations run wild for a few hours. We would fight any number of imaginary Skrulls, and the Brood. We stopped Galactus and raced thought time to fight Kang. I imagine Joss Whedon did the same thing when he was growing up, but he took it one step further. He brought all those childhood fantasies and he brought them to life. He's taken the reins of Marvel's years in the making experiment and he has brought it all together in one wonderfully successful blockbuster film. I'll admit I was worried Joss couldn't pull this off, but he has shown without a shadow of doubt that even at this scale he has a mastery of team dynamics and focus on character. This is a fun adrenaline fueled film that culminates in an awe inspiring climactic battle scene that Bay wishes he could pull off. 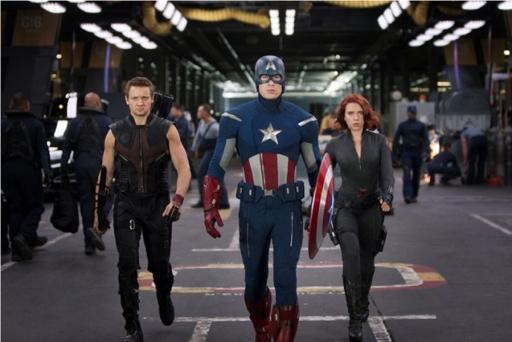 So first and foremost, I love Marvel and DC. The way Marvel has been creating this universe over the past few years has been so amazing to me as a fanboy. The films have all been successful to a certain degree. With the first Iron Man and Cap being the clear standouts. They all have worked for one main reason, impeccable casting. Joss continues that here, and gives everyone enough time to shine. This never feels like Iron Man 3, instead it truly is an Avengers film. Downey's Stark is much more contained here. You see him hide behind his narcissism as Downey turns in an amazing performance. He balances the emotion and the humor to much better success than Iron Man 2. Also his scene with Pepper shows why those two should just continue to make films together. 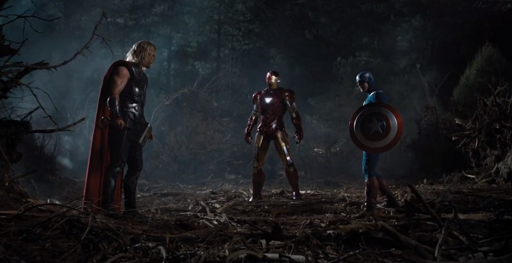 Hemsworth is Thor, there's no one else that can play that part. His relationship with Loki has always been incredibly complex and here Whedon makes sure to play that up a much as possible. Evans still has the thankless role of Cap. Cap would be so easy to turn into a one note cutout of heroism personified in the hands of a lesser actor. Evans imbues him with so much life and passion that you believe everything about him. Once Evans takes charge it's an amazing moment that will smack you back an make you realize all these dreams as a boy have just come true on screen. Whedon understands that these characters are why we keep coming back, and he let's them breathe for the majority of the film. Sure there's action along the way and Thor Vs. Hulk is a blissful experience of adrenaline, but for the most part he builds the story first and shows how these people come together. 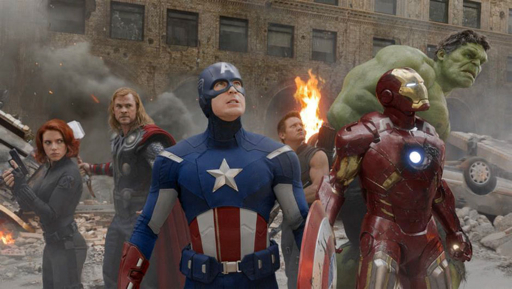 Alright so let's get to the Hulk. I liked Norton's Banner a lot and was pretty sad when he wasn't brought on board. When Ruffalo was announced, I had some hope, and now Ruffalo steals the show with an amazing performance. Whedon doesn't even let the other guy come out to play until more than an hour into the film. Just like everyone else he understands the importance of character and thus Ruffalo is left to indulge in Banner. His Banner is an overly relaxed scientist trying his best to avoid any sort of conflict. He tries to stay on the sidelines, until his hand is forced and the other guy comes out. The first time we see the Hulk is just a tease there are some great moments and we see a small glimpse of the awesome force that is the Hulk. And then in the climax the Hulk is released in all of his glory and boy does he smash away. 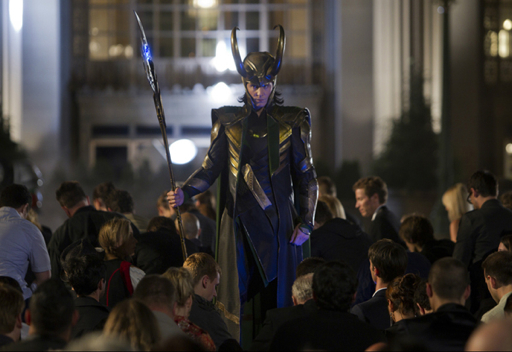 I praised Hiddleston as Loki the first time around and here he does even better. Now he has vengeance on his mind. Hiddleston is far more evil this time around, and he manipulates people throughout the whole film. His work with Stark and Romanoff creates some great verbal sparring, but you can't deny the chemistry he has built with Thor. I could sit as watch the two of them bicker for hours, and on top of that we finally get to see Loki fight. His showdown with the Hulk yielded some of the strongest cheers. I hope Hiddleston's contract is just as long as the other people in the universe. 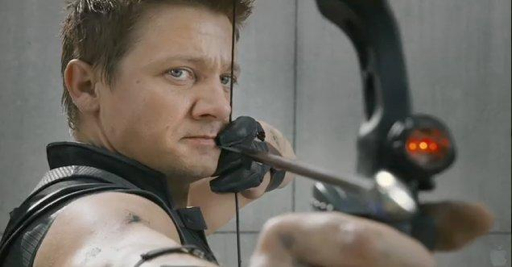 I could talk about character work forever, because they all bring so much to the table. Even Black Widow gets far more backstory than we've ever seen. Hawkeye gets a bit shafted in this department, but that's really a cause of the plot. When he's finally free to be "Hawkeye" he soars and capture Barton really well. It's a bit too little too late, but a small gripe for this otherwise fantastic film. 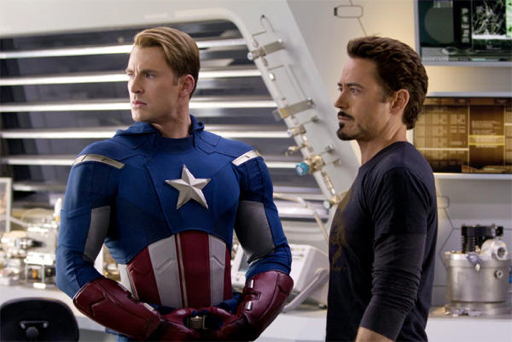 Not only does Whedon let his characters breathe, but he takes his time developing the story. I don't think I would call this action packed. There's little skirmishes here an there and some great set pieces, but it's not until the last scene that we really see an all out Avengers action scene. And that's perfectly ok with me. By the end of the film you're invested in the characters and what they're fighting for. He makes sure to tease you along the way giving us a three way fight between Cap, Iron Man and Thor, or Hawkeye vs. Black Widow. It's a smart now because when they all come together it is incredible. Whedon let's the action speak for itself, the camera moving smoothly as you see characters fighting on different planes. There is an amazing shot where the camera flies through Manhattan and we see each hero kicking ass. It's exciting and thrilling filmmaking and sets the bar high for any Marvel film to follow. 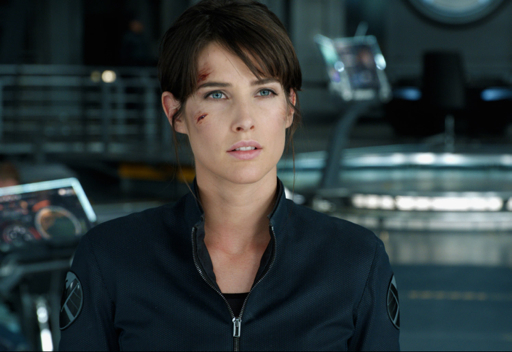 I unabashedly love this film. I could go on and on as to why. I never even mentioned the helicarrier or Stark Tower...becoming something familiar at the end. Above it all this is one of the best movies about super heroes I have ever seen. This isn't the gritty realism from Nolan's groundbreaking take on Batman. This is pure fantasy brought to life. These are larger than life characters that have inspired me my whole life. These are what my dreams were made of growing up reading comics with my dad. These are the stories I tell RC every night. This isn't better than The Dark Knight, but it's not trying to be. This is trying to be the best super hero movie it can be. And damnit if Whedon doesn't succeed with a childish glee. I love this film, Whedon has had two amazing films this year, and I couldn't be happier about it. 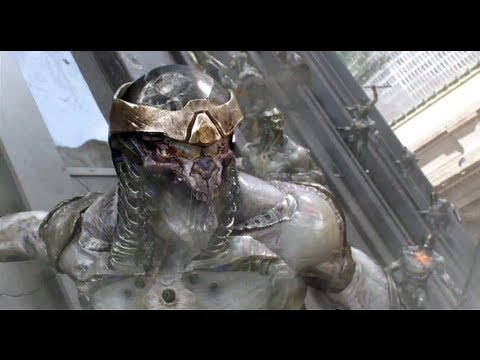 One last thought - so the aliens? Are they Skrulls? Not really. They are the Chitauri, which are featured in the Ultimate universe, at one point they say they have gone by many names "Skrulls" being one of them. Now I read that at one point Skrulls actually they hate being likened to the Chitauri, but there's no shape shifting sooo I'd say no to the Skrulls.