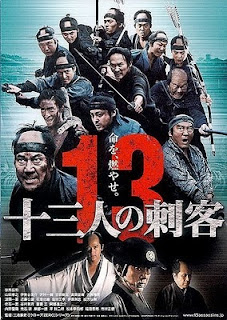 13 Assassins is one of the best movies of the year and might be Miike's best film to date. Although that latter statement is hard to qualify, as the guy makes a handful of movies a year. This easily takes its place with Ichi the Killer and The Bird People of China as one of my favorites of his. Miike defines versatility, and within each genre he brings his own brand of demented humor and shocking visuals even if its just a bit, so that every film still feels like a Miike film. This is a samurai film of the highest caliber, people are comparing it to Kurosawa, praise which I feel is a bit premature. Either way this is the best samurai film I've seen in the past decade, eclipsing Twilight Samurai from the top spot.

This is a simple story of an evil warlord who is about to gain even more power as his brother takes over as Shogun after their father's deah. After he terrorizes a few towns killing maiming and raping as he sees fit, a samurai named Shinzaemon is tasked with killing Lord Naritsugu. He bands together a group of 12 samurai and they set out to plan they're assassination attempt. There are skirmishes throughout, and some verbal sparring between the evil lord's samurai and Shinzaemon, but the heart of the action is in the last act as they turn a small town into a death trap with barbed gates and booby traps galore. In true Miike fashion the battle is as bloody and painful as they come. 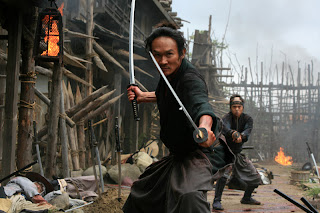 By far the most interesting part of this story is that it takes place during a time of peace for the samurai. As such many of them have never seen battle or used their sword other than for practice. A plot point which is sewn through the whole movie and gives us some powerful moments as young samurai make their first kill and we see the pain across their face. Aside from that each character is so well defined and played to perfection by everyone. From the leader Shinzaemon, to the mysterious Hirayama, to the samurai in it for money, to the evil Naritsugu. By the time people start dropping we've spent the whole movie watching these warriors prepare for battle and see how they're brotherhood has grown. The 13th assassin is the invincible thief who is found stuck in a tree. His family were all samurai before him, but he is just a commoner himself. They reluctantly let him join and he fights just as bravely as anyone, with his sling shot. 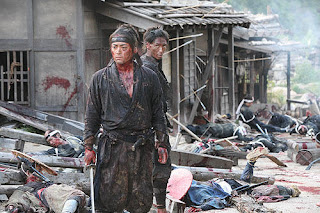 Miike shows some strong restraint in the action sequences. He really lets his camera focus on the action so we can see it play out, he rarely gets in close and never goes crazy with the jump cuts. We are able to enjoy the masterful skills these warriors have as they taken on 200 strong. The evolution of the final battle is done so well, as he really shows the strain it takes on each samurai, mistakes start to happen and blood is spilled like rivers of water.

Miike has really made an amazing film to add to his already impressive collection of films. There is still some pretty horrible imagery here including the most disturbing parapelegic I've seen in a long time, but he keeps it minimal and uses it to enhance the story. A master of visuals, here we get a beautiful and gritty looking samurai film that will no doubt go down as a classic of the genre. Whether its in the same class of Kurosawa is debatable, that in itself is high praise. Strongly suggest everyone take the chance to see this film.

One last thought - Miike seems content with the genre for now, with another samurai flick coming out this year. I'm hoping he latches onto this like he did with the Yakuza films, maybe we'll get a bug nuts insane samurai film like Gozu was for Yakuza.