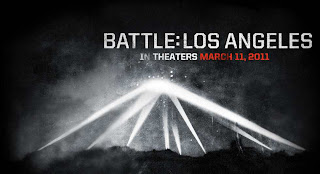 I posted a picture from Skyline a few weeks ago and said that it was just annoyingly awful. Battle Los Angeles is nowhere near that bad, it's just not that good either. This is the story of aliens invading and we see one platoon of soldiers that are in Los Angeles during the invasion. It really tries to be Black Hawk Down with aliens, but falls way too short of what that premise could promise.

Its not all bad though. We'll get to the positives in a bit. My biggest gripe is with the script. The characters are just cookie cutter soldiers, even Eckhart who is working his ass off, is just the same war weary soldier haunted by guilt that is in every other movie. We have the young excited soldier, the soldier trying to be his older brother, and even the impotent leader who must step up to lead his men in the face of tragedy. And all of them bring nothing new to the table. They all have their few minutes of introduction and then the action starts and doesn't let up. To top it off the dialogue doesn't help much either. Lots of "you're not dying today soldier" and "give this letter to my wife" and "were marines we don't give up" and so on and so on.

In the end these problems just render the action and deaths unimportant. We never care for anyone all that much so when people start dying it doesn't have a strong emotional impact. Also the action ends up being retreads of soldiers shooting at faceless enemies...over and over. To top it off the film is called Battle Los Angeles, we should have had Gehry's Disney Concert Hall blown up, or fighting along the Mann's Chinese Theater, the few shots of the 10 freeway just didn't cut it. I would have loved to see some military formations at The Getty Again, cool premise....kinda wasted here. 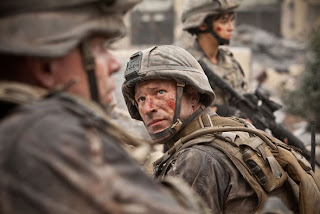 Like I said not all bad. The action itself is passable. Seeing soldiers fight aliens is pretty cool, if a bit repetitive. This again is due to the fact that no one has any personality. So soldier one shooting alien one kinda feels the same as soldier 10 shooting alien 10. Eckhart is also trying his best to make due with such cardboard characters. So I believe his speech towards the end, and I enjoy the last 15 minutes or so where his team begins to follow him into certain death. I even like the last scene in the tent where "we already had breakfast." These are all scenes with little dialogue and we begin to see loyalty come through in interesting ways. These little touches should have been throughout the film. Word is that a sequel is ready to go if it gets the green light. I'd be willing to give part two a shot. For now this is a very mediocre alien invasion film, I'm sure some will really respond to it, but for me nothing is special enough about it to get over its lack of character or interesting dialogue. Liebesman seems like he'd be much better off as a photographer than a filmmaker at this point. We'll see how he does with Clash part 2.

Short one I know, no reason to harp on the negatives. Not everything can be a winner. 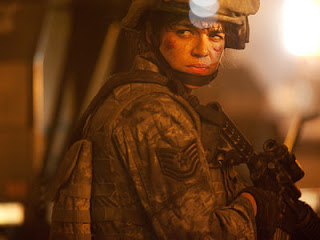 One last thought - Rodriguez.....I know you can do more than "badass chick."