Hatfields & McCoys, the Western genre and what we can learn from them... 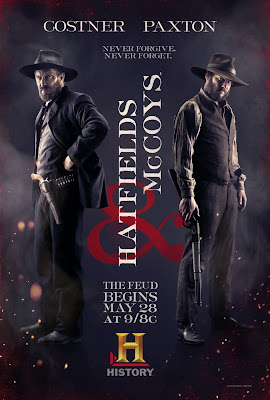 Don't you see the importance of this hangin'? The Hatfields and McCoys are famous!
Famous for what?
Killing each other.

I've long been hearing rumors about Kevin Costner and Kevin Reynolds burying the hatchet and a western project they wanted to do together. I've been a bit out of the loop with things with my wedding, so I couldn't help but smile when while driving down Sunset Strip in Los Angeles to see a giant Hatfiels & McCoys banner on a building a few weeks back. Bruce Springsteen once wrote a lyric that went "everything dies, babe, that's a fact, but maybe everything that dies someday comes back?" I can't think of a more appropriate term to speak of something along the lines of the western genre, what I have long called celluloid awesome. In fact, it describes most everything that sticks around long enough. As popular as professional wresting was in the 1980's, did anyone guess that over a decade later, through steroid and sex scandals, it would ultimately become more popular than ever behind bird flippin' folk like Steve Austin? What about the electronic synth, over-production and neon green and black plastic wayfarer sunglasses of the 80's? By the time they died out everyone loved making fun of them and was glad they were never to come back. Yet, walk by any hipster with an iPod and a pair of shades, you'll find different. The western, considered all but dead for sometime, is no different.

When a lawyer smiles, you know he's got more to say. 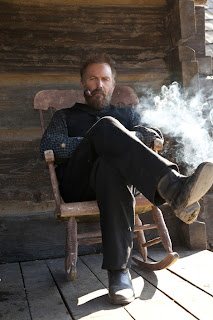 There is no more long-standing or 'American' genre as the western, save for maybe the gangster picture. Yet, for decades, it's mostly been a dead genre, one of little box office receipt and mostly used in the hands of art films. There were the early 1990's, we had a revitalization, or as close to one as we could hope for. Strapped on the back of the Academy Award and box office success of Dances with Wolves and Unforgiven, where two times in three years a western won best picture (that's two of the only THREE times in history that genre has won that award) the western was as popular as it could hope to be, and the box office clout of Dances or even Young Guns shows us that. As they always do, Hollywood over-did it, way too many film and television productions came shooting out over the next few years, very few with any artistic integrity. Films from The Quick and the Dead to shows like Lonesome Dove and Dr. Quinn Medicine Women, there were even dueling Wyatt Earp films. For every step right, for every Tombstone, we had Young Guns II. We failed, the western died again and has limped on ever since, mostly on the back of art films like Assassination of Jesse James and the groundbreaking HBO show Deadwood. Yet still, for every The Proposition we get The Last Rites of Kitty Pride.

I remember sitting in a modern Cinema class where the teacher asked why we thought the western had all but died, the gangster genre lived. However, she too would be surprised to see he last couple years, another revitalization in sight, maybe indeed all does come back. On the back of the critical and financial success of the the video game (a day one purchase for me, as was it's little known predecessor years earlier) Red Dead Redemption, the Coen brothers True Grit reinterpretation, to recently the ratings success of AMC's Hell on Wheels. Now, in recent days, History Channels mini-series Hatfields & McCoys has set and broken records for the highest ratings for an ad-supported cable program. Not since Clint picked up that gold man trophy for Unforgiven has the western genre looked more promising these days ahead. So what can we learn from it? To not screw it up this time, to not fail, to not kill it before it truly can be re-birthed unto a new generation of cinephiles and theater patrons. 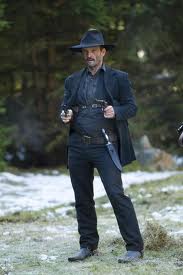 So, onto Hatfields & McCoys, the mini-series on the almost-infamous family feud footnote in Western history that has found it's way into getting parodied by everything from Looney Tunes to Scooby Doo. What do I think of  this three-part mini-series adaptation of history? Well, I sat engrossed for three nights watching a total of 6 hours of this mini-series, so that should say something. Is it Deadwood? Is it Once Upon a Time in the West? No, it's not, and it's not without it's flaws. But it's still well done piece of western entertainment that should satisfy all those who go into it with open minds. 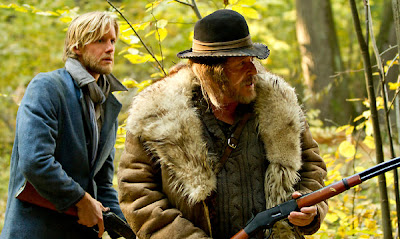 First up, let's talk about it technically. Let's talk a bit about Kevin Reynolds, sure Robin Hood: Prince of Thieves and Waterworld may be dated, and maybe Count of Monte Cristo didn't get the accolades it deserved, but let's say this about Reynolds: the man knows camera composition/movement. Look at any of those previously mentioned films, flaws aside, there's a unique and engrossing way Reynolds moves and situates the framing and movement. This film is no different, just take a look near the end of part 3, "Johnsie" Hatfield rides away from a gravesite as the camera pans along and then starts to move up and away revealing the hill he rides into the distance of, it's slow, beautifully handled cinematography. The heavy contrast low saturation almost sepia/antique look has been done before, but the sets and production design really back it up. The heavy mist surrounding the McCoy cabin and sunlight that pours in through the mist of the cabins windows as Jim Vance (Tom Berenger in a role he really sinks and disappears into) is a strikingly beautiful refraction to the violence that occurs during these same moments. The film compresses around 25 years into the main bulk of this 6-hour mini-series, and so while it probably could have been stretched out a bit more, the editing does a rather fine job of keeping the story moving and never confusing us as to where (and more importantly when) we're at and never stalls. As I said, flawless it is not, but it never strays too far away from the historical entertainment it's meant to be.

You the man they call Bad Frank?
Only my friends all me that. But never to my face…and never twice. 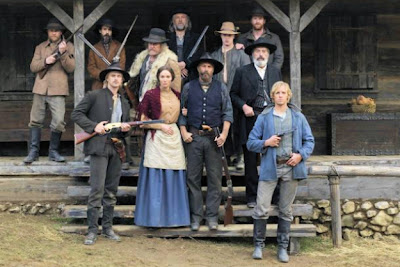 The acting is also not without it's flaws, but all the main parts are a fine oiled machine. As previously mentioned, Tom Berenger sinks and disappears into the role of Jim Vance, and there's times you can't help but want to shoot him yourself. The always underrated Bill Paxton delivers a stunningly reserved performance of a man of strong faith and resolve who slowly loses everything - physically and emotionally - over a long period of time until he's left a drunken, broken mess. Another highlight is Andrew Howard, often described as the poor man's Jason Statham, bringing the "bad ass" to 'Bad' Frank Phillips in a way Statham only wishes he could. Kevin Costner? Well, I have a soft spot for Costner, maybe going back to being a kid in the midst of his almost unparalleled box office run before his steam ran out. I know he's not the best actor or has much depth, but as he proves here, put a hat on his head, a pipe in his mouth and set him in the land of pre-1900, the dude is money. As "Devil" Anse Hatfield, it's all in his eyes, all in the way he stands when he talks to people, that's where the believability of what he's capable of comes from. That's why when he says "If you come back here I WILL kill you" to Frank Phillip or tells the Governor "You step in or I will" you believe him. Just the same way , as time goes on and changes him as a man, you believe the pain in his eyes when he considers the possibility of killing his own kin for the better of his family, or the prospect of leaving a beloved one behind to hang to save his family in a situation Spock would call "the good of the many out ways the good of the few…or the one." Just as the evolution of Bill Paxton's character Randall McCoy is a joy to watch, so is Costners as "Devil" Anse Hatfield. Powers Boothe is Powers Boothe, and by that, I mean you can't go wrong with that guy. Boyd Holdbrook is sadly haunting as "Cap" Hatfield, a one-eyed sharpshooter song of "Devil" Anse who struggles to see he can be more in life than a dead eye. The female supporting cast is strong too, adding moments of tenderness, grief, sanity (and insanity, though I won't spoil that) that only the women behind a man (and sometimes on top of him) can add. Oh, Jenna Malone you make a hot whore (not literally her occupation, but just her actions, her "day job" if you will) and your performance itself is solid, but your Kentucky accent does me want to smack you.

You come home with a Hatfield bastard in your belly!?!? 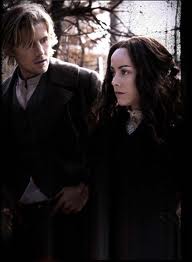 So, all that side, what is this show about? What can we learn from it? It's based on the historical family feud between the Hatfields and McCoys from Virginia and Kentucky, respectively. It's the days after the Civil War, the country is a bleeding heart and what's little less than a second smaller civil war breaks out between these two factions. It's really too late before they realize what they've done to each other, the pain they've caused for themselves. It's the show Family Feud as played out in front of the gates of Hell. Watching the show I'm reminded much of the world we're in today in America. An America that hasn't been so divided since the actual Civil War. The hatred and spitefulness that streams right down the middle like a never ending wound. A country of freedom and choice has become the country where if you don't agree with ones political and social opinions, they're a downright bigot moron who barely deserves to breathe, if that. That's what we can learn from Hatfields & McCoys, before it's too late. I don't care what your opinion of Obama or gay marriage is or if you think Lady Gaga is Shakespeare. It may annoy me, but it's not worth where this is all leading. This country is more concerned with what the "moron" in the car in front of you has as a political bumper sticker than the real problems that can plague or country. Get busy living or get busy dying, but quit hating each other for their differences in life or opinion. Or end up like Randall McCoy, drunken and broken from a life of hatred and remorse. That's what we can learn from Hatfields & McCoys.

One day you'll have children, Cap. They won't care about our old grudges. When they have children, well, they won't even know about them. You can't hold on to hatred forever...
Posted by Hudson Hawk at 4:34 PM