"Great Scotland Yard! Worthington's having a half-price sale on bowler hats!": The Adventures of Tintin 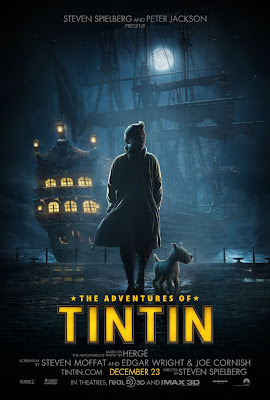 The Adventures of Tintin

Tintin is not too large or well known as a property here in the states. When I worked for the library, I would leaf through Hergé comic about the boy reporter, the sea captain Haddock and of course, Snowy. The trio had some great adventures two of my favorites were their trips to the Soviet Union (what can I say, I have always had a firm interest in all things Russian) and the thinly veiled version of Nazi Germany. Needless to say, when I first heard grumblings of a TinTin film, I was intrigued. Then it was mentioned that the film would be animated via motion capture and my interest waned considerable. During my most recent stint in Tucson, I decided to give this film a shot in spite of my aversion to this particular form of filmmaking. 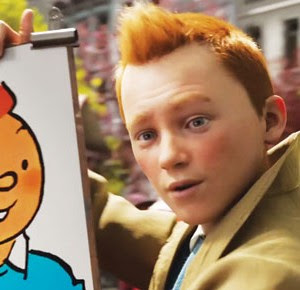 The film follows Tintin (Jamie Bell) in his quest to find out the secrets associated with a model of the ship known as the Unicorn. It turns out that there is a race to get a wealth of treasure resting on the bottom of the ocean. After being kidnapped, Tintin runs into sequestered drunkard, Captain Haddock (Andy Serkis), who assists in freeing both Tintin and himself from the clutches of Ivan Sakharine (Daniel Craig). This takes Tintin and his newfound friend to Morocco in a bid to find the third model of the Unicorn and closer to finding the treasure left by Haddock's ancestor.

The film is a throwback to Spielberg's prior foray into adventure films, Indiana Jones and frankly, I felt prior to seeing it (and after) that the film should have been live action. With a few tweaks to the script, this would have been entirely possible. This film suffers from the same issues with the "uncanny valley" that plagued Beowulf, Polar Express and the Jim Carrey Christmas Carol. This was not much of a problem with Haddock and about 99.9% of the characters (since they looked more like cartoons) but was a distinct issue with Tintin and Sakharine. In fact, I found it hard to watch them on screen because of their appearance (cough, uncanny valley, cough) and to reiterate that the film would have been much better had it been made live action (and no, I do not buy their reasoning for the motion capture). 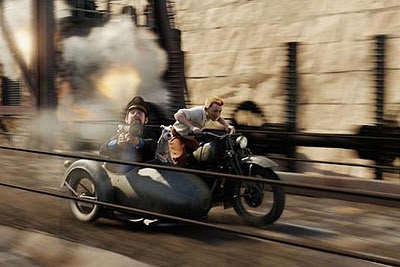 Overall, I did not hate the film (just the method of filmmaking utilized) and found the plot to be enjoyable. In addition, the voice acting was top notch and Andy Serkis has to be singled out as the best of the bunch. When I walked out of the theater, the other three in there felt he was a bit over the top but I thought he was great. As was mentioned earlier, the script and plot felt a lot like Indiana Jones and by the film's conclusion, I was curious to see where they will go with the sequel. In the end, Spielberg's debut in animation was an admirable one but this has a lot to do with his manipulation of medium (specifically, the movement of the camera) than anything else. 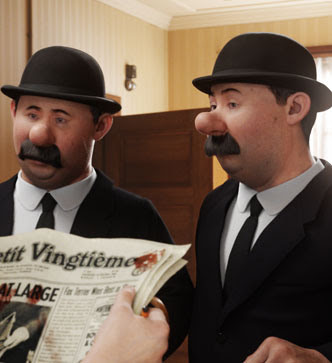 Nick Frost and Simon Pegg are always entertaining. Thomson and Thompson were easily one of the best bits of this film.