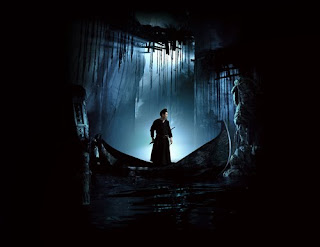 I'm going to take a detour into a pair of foreign flicks that offer up a great time. Don't worry I'll get back to my year end wrap up soon. First up I want to look at Detective Dee and the Mystery of the Phantom Flame from Hong Kong director Tsui Hark, here working with the great Andy Lau as the titular detective. Detective Dee is pulled out of prison to investigate a series of bizarre spontaneous combustions which people are calling black magic in an attempt to prevent the coronation of the first lady Empress. I wonder what springs to mind when you think of a Chinese Sherlock Holmes? Because that is what you get with this film. It is a wonderfully complex mystery that unravels with plenty of red herrings and subplots and plenty of mysticism(or is it?) for all. The film entertain from start to finish laced with great action pieces a breezy lighthearted script with a strong enough mystery to be intriguing but never taking itself too seriously. 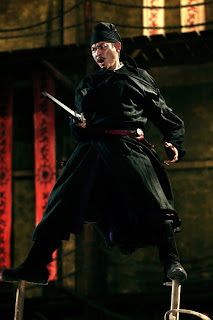 Tsui Hark makes big movies full of big ideas that are not always realized completely on screen. This is easily one of his biggest accomplishments. Sure the cgi shows a bit, and wire fu is spotted by anyone these days, but you know what Dee fighting CGI deer is absurdist bliss, and the wire fu fits in perfectly in this world where people still believe in magic and mysticism. It all serves the film and adds to the energy of the entire piece. The whole thing moves at a great pace as our Detective moves from locale to locale gathering information and showing off a bit of his fighting skills for good measure.
The visuals in the film our gorgeous as any would expect from Hark. With the Shadow Market and the Chaplains home as standouts for me. Everything is shot clean, and he never lets something like "action" get in the way of proper composition, rather he uses his camera in conjunction with the fighting, dancing in unison with action instead of against it. 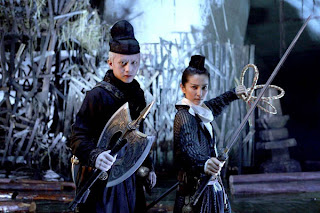 I mentioned before that this is what Sherlock Holmes would be like in China, and I stand by that. Dee drips cool and the guy is the smartest one in the room wherever he goes. Like Sherlock he is more occupied with the answers than the reason, although in the end his moral code rises above all. Here he's even given a great helper like Watson except this guy can throw down as well as anyone else. It's a great character and Lau does solid work as always keeping us engaged with the character throughout.

This is what popcorn movies should be. It is incredibly entertaining without being moronic. It has great action and intriguing characters, but the plot and mystery require you to stay engaged and pay attention to get the full enjoyment of the piece. Highly recommended for anyone looking for an awesome movie to watch with friends. Unless you have a problem with pesky subtitles I can't imagine anyone not having a blast with this one. Again the guy goes head to head with deer, he has a mace.

One last thought - seriously, shits about to go down
Posted by Bence at 7:04 AM