Weekly Wish List UPDATE Rise of the Planet of the Apes 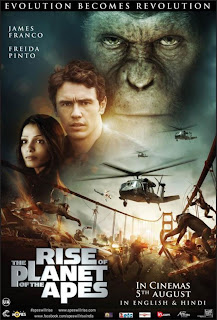 So this is easily the years biggest surprise for me. I mentioned I had no real desire to see this film, not that I thought it looked bad, but I just wasn't that interested in watching it. After all the buzz and some recommendations from my cohorts here at the Maus I knew I had to give the film a chance. I am absolutely glad I did. Rupert Wyatt has crafted a smart science fiction that earns every beat of its amazing climax. The film sets itself up beautifully so that when the inevitable happens it is heartbreaking and I don't think( at least in this film) that you could label Caesar a villain. This film truly how's you can create exciting and thrilling cinema, filled with an intelligent story and great characters. 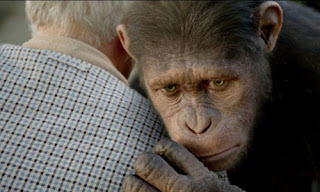 First and foremost I love science fiction of all kinds, but there's a special place on very nerds heart when someone can elevate science fiction the way Wyatt does here. While perhaps not on the level of Duncan Jones, this movie has its roots on an action adventure franchise, and does an amazing job at explaining how we get to the scene where apes ride horses. I mentioned above that Wyatt earns his climax, and boy does he ever. Most of the movie is telling the story of Franco raising Caesar and giving us an amazingly earnest father and son story. You feel the love between the two of them, and when things begin to go awry you feel the pain from both characters as they are torn apart. Is really not until the end of the film that the action kicks in and apes begin to run amuck. It's an incredible feat but he keeps you engaged the whole time and when the end comes everything pays off because you are so invested in each character. 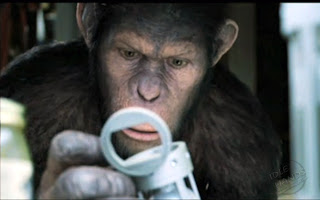 So, Serkis as Caesar? Yah it's kind of amazing. If you watch the special features on the blu ray you can see just how much of the performance is actually him. He gives the character so much soul, and personality, all without dialogue(heh) As he gets smarter you begin to see him calculating and forming plans an it's a testament to both Serkis and the animators who brought Caesar to life.

Speaking of the animators the special effects work in the film is amazing. It's obvious that it's a CGI ape, but by the end of the film you completely forget that and you are convinced that hundreds of apes are running across the bridge. The work is seamless and beautiful as they move naturally and with weight. Exceptional work that hopefully won't be overshadowed by giant robots. 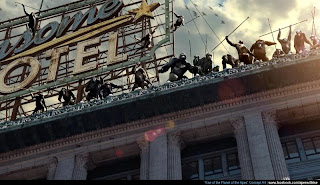 A great sci fi film, and the rightful newest entry into the canon much more than Burton's film. Wyatt's previous film was about a prison escape, so I wonder if the next one will feature more breakouts. Maybe the apes will be outrunning deforestation. Either way this time I'll be there day one to find out.

One last thought - Hawk can help me out more, but I'm not sure how I feel about the subplot explaining the beginnings of mankinds demise. Was this part of the original mythology?
Posted by Bence at 8:23 PM