I don't know if Andre Bazin would agree with you....The Simpsons take on Awards Shows 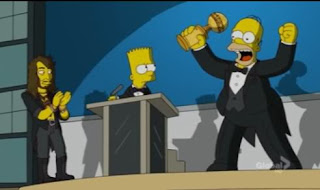 Ah the awards season. Subjectivity at its best come to collective unison as we are given an onslaught of awards at which various groups of people let their regional and personal bias take heed and show through with various selections throughout the cinematic year. Typically love it or hate it I am firmly in the love it section. Not because I feel any one body has the end all say all when it comes to deciding what the best is, but as a living organism it is curious to say the tug and pull as films rise and fall from glory. Social Network and Brokeback Mountain are two great examples of films that were clear front runners up until a week or so before the big show and both lost out in the end. As a social study it is curious to see what is chosen and what is sadly left behind(how is Tinker Tailor not getting more love?). Well as the resident film columnist I will have a few awards based articles coming up in the next few weeks especially with the announcements of the Oscar nominations coming soon. Before all that I want to kick off my series of awards season articles with a look at a recent Siimpsons episode. I previously looked at the episode in which Springfield held a film festival, well this episode takes a look at Bart as he take his animated Angry Dad short film on the awards circuit. This is another hilarious send up of the Hollywood scene as awards shows, famous animation from the past few years, and even focus groups are given the Simpsons treatment. 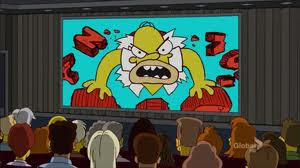 The story follows that Bart's animated short was bought out by a chair company, and the new owner would like to turn Angry Dad into a feature length film. After an amazing example of screen testing Bart literally takes a knife and butchers his film, what they are left with is an award winning short that sweeps the awards circuit. I love that Bart simply has a chef's knife on hand an that e proceeds to dice the film up. I suppose one could make the argument that self editing is one of the more important parts of film making and that perhaps at 4 and a half hours, they were being a bit self indulgent. Oddly enough I have a piece I'm working on about a brilliant modern day epic 4 hour masterpiece. But that's for later. 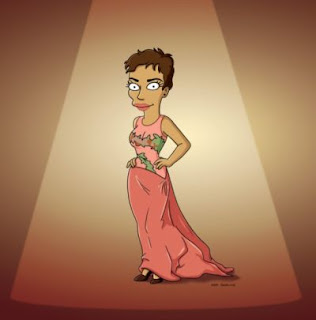 So the two really big parodies here are awards shows, and some incredible recreations of modern animation. They go so far as they have Halle Berry wearing the dress she won her award in. Her speech about "another form of animation" is a hilarious take on the pointless dribble the presenters have to get through. Even Jack Black and Ben Stillers amalgamation of blockbusters attacking each other hits pretty hard. 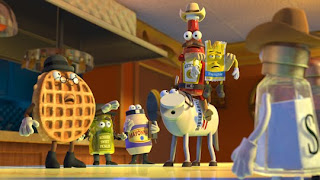 What really tosses this episode into classic Simpsons status is their parody f other animators. The whole episode starts off with an homage to old Kung fu revenge flicks, which leads us into the A story. When we get to the awards shows we begin to get clips from the other nominees. The artists nail these parodies perfectly creating short pieces that honor and emulate their peers perfectly. As great as the "Mixar" film "Condiments" is, featuring a horseradish horse, and Wall - E hiding a gun in one of his compartments, it is the Sylvain Chomet, and Nick Park pieces that slay me more than anything. 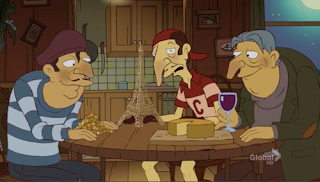 The Chomet is obviously emulating The Triplets of Belleville and is hilarious in its absurdity as each of the brothers insist on shoving things up their nose and blowing them out to reveal something different. I love that the toothpicks are the only ones that cause an actual consequence as he sneezes out an Eiffel tower only to have his nose spout blood and beginning running around the room in the fluid nature of Chomet's art. 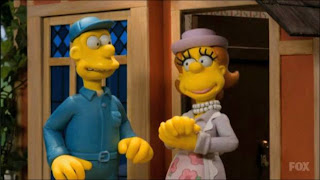 Then there's the parody of Wallace and Gromit. The animators obviously have a lot of respect for their peers as they nail the design and the tone of each of these clips. Wallace and Gromit has amazing stop motion claymation complete with absurd rube Goldberg devices for menial tasks. Add to the obliviousness of Wallace as he spends his time courting a lady while Gromit is run afoul by a mischievous bird this is a brilliant interpretation both hilarious and reverential. Also, love the fact that they eat marmite sandwiches.

The Simpsons have long been a stalwart of quality adult animation but had a bit of a dip in the mid teens. I've long been a fan and consider it the greatest show to ever grace our screens, but you'd have to be crazy to not admit to the first ten seasons being better than the second ten. But in the past few years, especially after the movie, some of the older producers have come back in a larger capacity, including my favorite, David Mirkin. This has yielded some new classics, with this episode of being a prime example of the modern day Simpsons episode. That's about it for now, I'll be back starting with some more awards coverage. 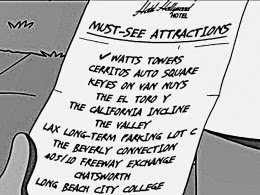 One last thought - this is the list of must see attractions Bart gives Homer. If I need to explain why they're funny then there's no point.
Posted by Bence at 8:35 PM