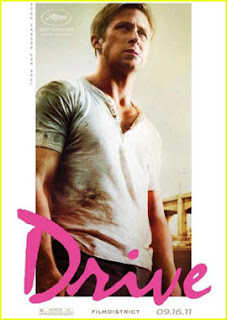 Contagion was a great way to start off the fall season, and I am back with a review of Refn's newest film and first of many collaborations with man of the hour Ryan Gosling. Drive is a brutal, sophisticated and overwhelmingly cool movie about trying to do what's right and the dark places we go to fix mistakes we've made. 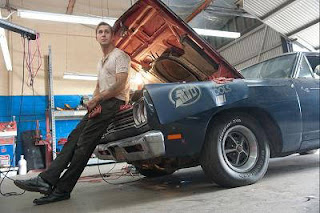 Gosling is the nameless hero of the story and he brings all the quiet intensity that he's known for. There is so much soul behind his eyes, that you know with a glance that this isn't a man you want to mess with. His performance is pretty minimal when it comes to dialogue and Gosling does an astounding job with such a monotone delivery that the moment his voice begins to shake at a key point in the film it carries so much emotional weight. I think Gosling is an extremely talented actor with a decent range, this is much more in line with his early work in The Believer and I can't wait to see what he does in the political thriller with Clooney next month. 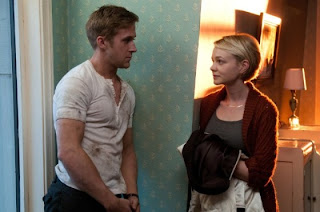 The whole cast turns in great supporting roles. Everyone in the film seems destined for tragedy, and they all are trying their best to escape the ever looming darkness. Mulligan is a simple role, but she gives her character enough sadness under the surface that we can see how worried she is when her husband comes home. She alread knows that him out of the picture is the only way she can live the life she wants with her son. Oscar Isaacs has a small role as the returning husband, being dragged back into one more heist despite his sincere desire to go straight for his family. Cranston does his thing as a mentor of sorts to Gosling, attemping to make some honest cash in the racing circuit. But Brooks is the real star of the supporting cast. He is terrifying, and once you see what he's capable of you see he is really the only true competition for Gosling. The guy moves through the film with ease and like every other character(except Perlman, who's content chewing away) he doesn't want to lead a dishonest life, but that's what his life is. He kills with such ease you know he's done it for years, and he's tired of it. He is absolutely not happy the choices he has to make to fix the problems in his life. Brooks is always great, but I have never seen him do a performance like this.

Aside from the great performances Refn directs this film with so much power and style. THIS is a great example of style being used to further the narrative, it is never distracting or overbearing. Rather it blends seamlessly with the film, he uses deep focus and three shots to reinforce the various relationships in the film. Its an old fashioned technique that Hollywood seems to all but forgotten. I guarantee you Ratner cares not about his mise en scene.

I want to look at a brief scene which is a pivotal point in the film where Gosling turns to look at the camera and shit is about to hit the fan. Light flashes across his face, then he backs Away and his face becomes covered in shadows, thus begins a journey to the dark side in order to protect Mulligan. She spends the whole film in playful colors and soft light, even after this point above the only time where Gosling steps out of the shadows is when he's near her. The whole effect is subtle, but it adds so much to the film and the mystique of his character.

This is not a guns blazing action film. This is a stylish, rough, brutal and smart crime drama. This is a great example of modern tragedy as everyone gets pulled into situations they didn't want. No one in the film is innocent, but everyone is trying to run away. Gosling spends the film being the best at getting away from the scene and fixing up cars so he could do that. It's a successful metaphor that could be analyzed in great detail. I don't want to go too much further into the film, because it is such a joy to see the film unfold. Refn has added another great film to his career. This is an exciting talent that if he continues down this road he will be an amazing force in cinema. 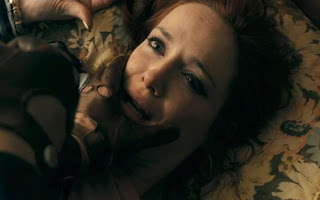 One last thought - Christina Hendricks is in the film....I know Refn loves her, he has stated that she is the only actress he would consider if he ends up getting the Wonder Womam gig....the way he treats her here though....damn.
Posted by Bence at 11:21 PM