In the name of the Father, The Son, and the Holy Rooney

So I’ve been your friendly neighborhood columnist here at PORTEmaus for several months now. And I have to say, aside from the numerous restraining orders I’ve had to take out against the numerous 50+ year old groupies I’ve accumulated as a result of my peabody-esque entries, It’s been an amazing experience. You see, initially I was just your average columnist with an opinion. That is until I attempted to classify my position here. That’s when it hit me. And I coined quite possibly the best phrase of all time.....with the word PORTEmaus in it:

“I’m the Andy Rooney of this PORTEmaus sh*t!”

It wasn’t long before I was getting calls from the CBS cafeteria about a tab that was getting completely out of hand. Calls from “Bushy Brows Weekly” wanting to award me with the “Bushy Brow Lifetime Achievement Award”. And of course the women. Let’s just say I now have to avoid Post Offices, bank lobbies, and supermarket pharmacies as to not create a menopausal mob.

Anyhow, if you get your news from Yahoo like this reporter, you’ve probably heard: 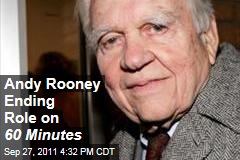 Yeah. The Roonski is calling it quits. While he didn’t cite a reason from what I could gather, I would think this could be health related. If that’s the case, I would say retiring is sealing his fate. Why you ask? A wise man once said:

“That’s why every day you should go in your front yard and scream at the children in your neighborhood ‘Get out of here you little shits!!’ and it will be better than taking vitamins!”

Without Andy’s long established creative outlet to bitch about the mundane events of life he will slowly become less angry and thus slowly slip away.

But then again, maybe he’s earned his ‘final ride into the sunset’. In either case, I want to thank the man whom I’ve watched since a child complain about dumb shit and somehow always made my dad chuckle. Maybe that what inspires me to do what I do. Make Gonzi Supreme Sr. Chuckle.

Thanks Andy. Thanks Pop. And no Mrs. Thompson...I will not come and live under your bosom and quote Mr. Rooney on command.
Posted by Gonzi Supreme at 9:06 PM