Fashionably Delicious: Missoni for Target an exercise in stripes and ubiquity 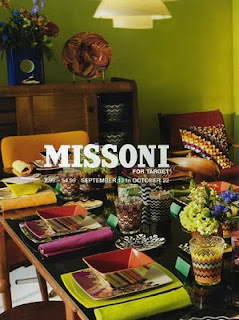 The sound of millions of consumers hearts breaking as their dreams of high fashion for less was shattered by the crashing of Target's website today. Greeted by a snarky dog promising to fix the error messages people refreshed and refreshed in the hopes of catching the remnants of Missoni's absurdly ambitious 300 piece limited collection for the discount retailer. Why didn't these people just camp out?

Word around the blogosphere is that stores were selling out within minutes. The local store here in Brooklyn apparently was sold out in ten minutes. Twincess and myself took a leisurely drive to the "far" Target hoping we would outsmart the other supposedly fashion conscious simpletons by going out of the way. We strolled in the doors expecting to be greeted by this. 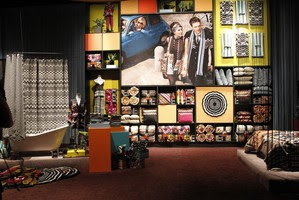 But no. Instead we found this. 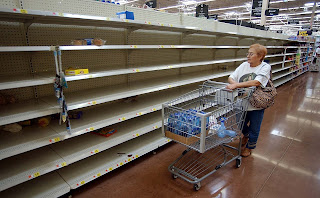 Needless to say, we left depressed, sad, and with a serious lack of new chevron striped shower curtains and towels.

Target has been doing design collaborations for years now, and I would say that overall the response is very hit or miss. There's instances like Proenza Schouler and Cynthia Vincent where the items sold out almost immediately, but for every homerun you have a line like that of my old boss Patrick Robinson which was lackluster at best. Even high quality designers like Zac Posen and Alexander McQueen failed to generate little more than some first day buzz. Anyone who actually wanted the clothes from those collections should have had no problem finding what they wanted at any of the multiple Targets that clog any metropolitan area and its suburbs. Don't even mention the Men's collections done by Rogan or William Rast, aside from some dedicated customers I doubt anyone remembers the short time Justin Timberlake graced the Target shelves. 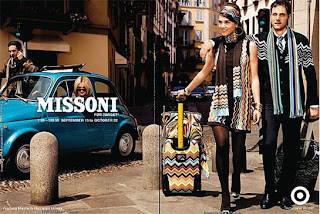 So what did Missoni do that the others didn't? Well I mentioned Zac Posen and Alexander Mcqueen in that paragraph above, and those two made the simple mistake of not understanding who they were designing for. Remember, we're still at Target. Posen and McQueen are known for pushing the fashion envelope and when they're working with absurdly elegant materials there creations are nothing short of modern art, but designing a twenty dollar top is completely different. Mulberry had the same problem. Their bags are amazing because they are quality bags made from gorgeous materials, not cheap pleather ready to be tossed about like a potato sack. Missoni was insanely smart in keeping their design as SIMPLE as possible.

There are always going to be the few that are going to buy it just because it's Missoni. It's a huge Italian designer, that is very much still relevant in modern fashion, but they managed to attract the attention of just about everyone. Even if you don't know who Missoni is(shame on you by the way especially if you think you know "something" about fashion) you most likely recognize the chevron stripe(that's zig zags for all you fashion deprived out there) pattern that is their trademark. In case you haven't seen their collection, they put this design on EVERYTHING. Clothes, cups, towels, shower curtains, make up brushes, blankets, etc etc AND even a bike. By keeping it simple, and just offering variations on their signature design they don't alienate anyone, but rather they make everything accessible. This is the kind of line that allows anyone to enjoy a piece of fashion royalty for less, it is undoubtably recognizable and those fashion dreamers out there get to flash their success for everyone to see. Missoni has set the bar for future collaborations and hopefully we will see this kind of thought going into how these collaborations play out. Do you really want a t shirt with a lipstick on it? of course not and I love Zac Posen, but give me a throw in warm colors with a nice zig zag pattern and I'm there.

So back to that error message. People all across America are upset and disappointed, chastising Target for not creating enough supply to meet demand. Look I'm bummed my shower still has a solid gray outside, or that my couch has nothing more than a pop of green courtesy of Ikea, but you know what? That's the point. Target managed to create a "craze." They sold out COMPLETELY...100% sell through of first delivery. Those kinds of numbers are insane, they don't exist in this retail market(trust me on this one). I'm sure if you look hard enough you'll be able to find some stuff, but for now these items are bound for the trenches of eBay where I absolutely refuse to go. Like I said, in the end this is still Target, people. There's two possible outcomes to this. 1. They will get restocked with way too much product hoping to capitalize on this craze, and end up sitting on it because let's face it as awesome as this collection is, a month from now no one will care.
2. They won't restock and the rest of us won't get our shot, which is ok because a month from now no one will care.

I applaud you Target, you made something special in the retail market. Even if its just for a few weeks or a few days, this week is yours. 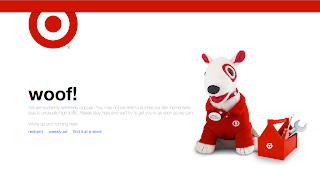 One last thought - Seriously ....they crashed the Target website....do you have any idea the kind of traffic it would take to crash a huge company like Target?
Posted by Bence at 7:51 PM