Wanna know how ill Gonzi is? I can take a hiatus from work..come back and commandeer the boss's column! What!? Na...in all seriousness I am contractually obligated to review the following film as the resident Hip Hopper at PORTEmaus...so enjoy my "the man made me do it" review of "Beats, Rhymes, and Life - The travels of A Tribe Called Quest". 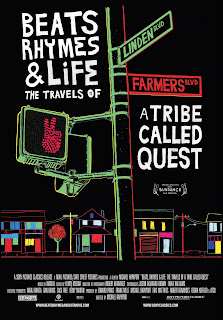 It’s not very often a music group completely alters your total being. And it’s even less common for a documentary about such a group to be worthy creatively of the group it’s profiling. Enter “Beats, Rhymes, and Life: The Travels of A Tribe Called Quest”. For those of you not familiar, A Tribe Called Quest was a ground breaking hip hop group in the early to mid 90’s. In a span of about 4 years they released three of the greatest albums in Hip Hop history - and consecutively no less. One of which (Low End Theory - the album that Dr. Dre said inspired him to make ‘The Chronic’) is actually considered one of the best albums in music history, period. Many consider it to be the “Sgt Peppers” of Hip Hop. So naturally, trying to capture the complexity that is ATCQ would be a noble undertaking. 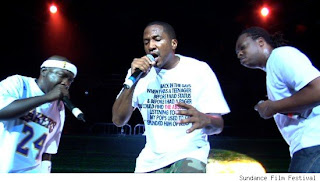 After a flash forward (more on what that entailed shortly), the movie takes us on a chronological journey of the group, beginning with the origins. Q-tip and Phife, who are the MC’s of the group were childhood friends. Later on, Q-tip meets Ali Shaheed Muhammad (The DJ) and Jarobi (Beatbox/Hypeman) is introduced to the group through Phife. Though I know a good amount about the group, there was certainly things I didn’t know that I learned from the film. Apparently the group was actually just named “Quest” to begin with. And when Q-Tip hooked up with another group known as the Jungle Bros to record a joint called “Black is Black” Q-tip unintentionally found the group name when introducing himself on the track:

Which brings us to Michael Rapaport. Known only as actor, Rapaport is in the directors chair for his first full length feature in this film. To his credit, I believe not only as a film fan but a Tribe Called Quest fan that he did a good job of capturing what the group is about. 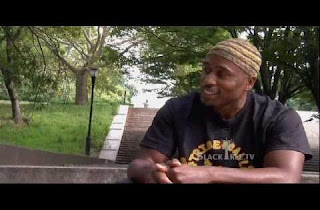 Ali talks about feeling caught in the middle of the Tip/Phife Drama
That said, it was not flawless. Case in point, Q-tip, Ali, and Jarobi actually came out prior to the film’s release and disapproved of the group’s portrayal in the film, citing that Rapaport focused on the ‘drama’ with the members instead of the music. I tend to agree with them and it’s clear after watching the film that Rapaport is partial to Phife. (He actually named his son Phife some years ago) Q-tip comes off as some control freak hell bent on making the group work despite Phife’s health issues. And Phife is portrayed as a victim instead of a survivor. If after seeing it, you don’t get that vibe from it just look at the opening flash forward sequence in which Q-Tip and Phife are fighting and talking about not wanting to perform together. Showing this as your opening scene is essentially conveying that “drama” will be the underlying theme of the film. Obviously, considering the magnitude of a group such as ATCQ this should not be the case. 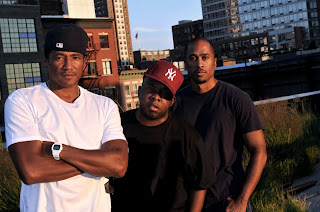 But ultimately, the film succeeds with it’s goal which is delivering the history (good, bad, and ugly) of A Tribe Called Quest to a majority of it’s audience. A film that I encourage everyone (hip hop fan or not) to check out.