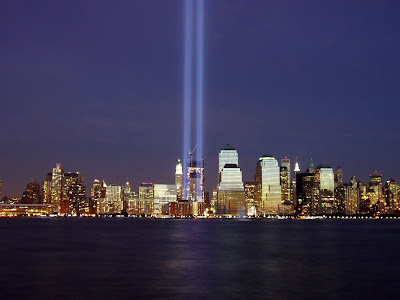 It has been ten years since the attacks of September 11th and frankly, I do not have the words to really do justice to the victims of this act of barbarity. Since other venues such as the NYTimes have presented stories about people's experiences as witnesses to this event, I felt I would add mine to posterity.

I had hopped the bus to work early in the morning, roughly 7:30 MST and somehow made it through my morning routine without turning on a television or radio. So, I arrived at work, ecstatic over the possibilities brought by a blueberry muffin and Diet Mountain Dew. I apologize if this seems inconsequential but it sets the state mind that I was in or how completely unaware I was about what had happened a little before the time I sat at 8:00 am MST.

Moments after getting my computer up and running, one of my coworkers came and said that a plane (I thought it was like a Cessna not a commercial airliner) had hit one of the Twin Towers. I expressed my complete disbelief at the idea of this. I mean, it seemed possible but honestly, my first thought was that something happened with the plane that made it crash. I attempted to look at Yahoo!'s news page to see if this was real but it was overloaded with traffic and did not work. A few minutes later, the page loaded and staring me in the face was a commercial airliner striking the side of the World Trade Center.

By the time the second plane had hit, I quickly realized that this was not simply mechanical or pilot error but something else. I remember listening to the local talk radio station (Happened to be Conservative) and sitting in bewilderment as they asserted that Saddam was to blame. They were also quick to say that Baghdad should be nuked (I chalk it up to emotion). This struck me as odd because I had a relatively decent knowledge of Osama Bin Laden and Al Qaida having written a poorly received paper for a class about international terrorism and early fundamentalist plots... If it smelled like a rat then it usually is a rat. This was one of those situations.

I found it completely impossible to work the rest of the day, as did many of my coworkers. It was not longer before I knew that the United States had experienced another "awoken a sleeping giant" moment in history. The actions of Al Qaida had "instilled in us a terrible resolve" much like the Japanese upon the completion of Pearl Harbor. September 11th was a tragedy that sent reverberations through the whole of the United States and it was changed after it. I have tried not politicize this account (or even my feelings about September 11th ten years later) as I think it reduces the impact of losing of 2,977 souls who were simply going about their daily lives. Ten years after this sorrowful day in American history, it is those we lost who should not leave our memory.

-Manny
Posted by Manfred "Manny" Funkowitz at 11:08 AM