What Kind of King Begs Others to do his Fighting for him?: The Special Relationship 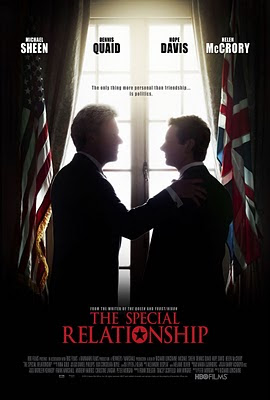 For those who know me, I am a huge fan of Bill Clinton... Actually, I think strangers know this about me. I am one of the few people who have read the mammoth memoir that is My Life cover to cover... For those curious, it is a good read. So, you can imagine that I caught wind of a movie detailing the relationship between Tony Blair and Bill Clinton that I would be turning in. Well, I recorded it to my DVR and then let it sit for almost a year. It was not disinterest, it was more because I found other things to watch. 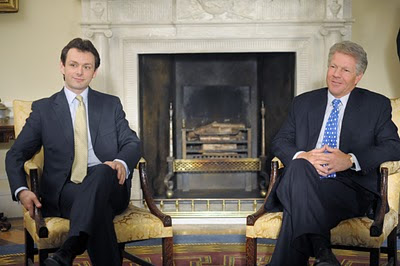 The Special Relationship opens with Tony Blair getting a crash course in the Clinton method of "progressive" politics, in the hopes that it be unleashed on England (Think reverse Beatles sans the music and the wicked ronnies). Soon after, Blair is elected Prime Minister and Bill is quite excited about the possibilities of two like minded political men ruling the most important nation in the world and its natural cousin. Obvious to the casual observer, this relationship between Clinton and Blair would not continue to be sugary sweet forever.

I am kind of torn by this film, it was written by the same person who wrote The Queen and yet, this film never feels more than a television movie. Kind of like Peter Morgan was tasked to write a trilogy of films dealing with Blair and only one was given some serious money to see it made. In spite of this, I am curious to see The Deal and I should note that the writing for this film is top notch. The acting too is pretty good overall, Michael Sheen as Tony Blair was kind of a little down and Dennis Quaid at times was merely a caricature of Bill Clinton (although, he did an admirable job). 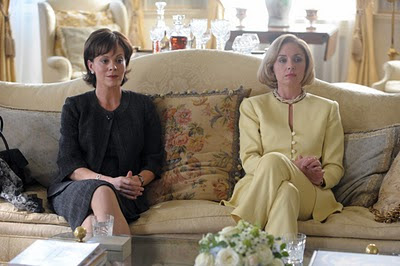 Hope Davis comes through in the clutch as Hillary, which is kind of surprising because when I came into this film, there was only one Clinton that I wanted to see... Bill. Also, I have to single out Helen McCrory as Cherie Blair (a role she reprises from The Queen), she brought strength and intelligence to a role that could have been nothing more than that of the Prime Minister's wife.

In spite of the "made for television" aesthetic, The Special Relationship is an interesting film from a largely Blair perspective. It shows his progression from unknown English politician to Bush Administration stooge. It is a tragic tale because it is apparent that Blair was more concerned with his legacy than anything... Something which is in shambles now (both here and in the United Kingdom). Plus, the film is worth watching simply for the last scene between Bill Clinton and Tony Blair, the dialogue in it was amazing.