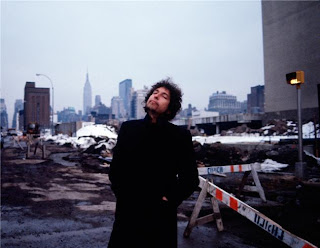 Beautiful Melodies telling your Terrible Things Vol. Return
"Every step of the way, We walk the line
Your days are numbered, so are mine
Time is pilin’ up, we struggle and we scrape,

We’re all boxed in, nowhere to escape…"

September 10th, 2001 was a pretty normal day for most people in this country, they went to bed that Monday night expecting to wake up to just another Tuesday. For me, it was an exciting countdown, the next day “Love & Theft,” Bob Dylan’s first album in four years was to be released. This was a big deal again, after his 1997 multi-Grammy award winning comeback LP ‘Time out of Mind’ and his Oscar winning number “Things Have Changed” for Curtis Hanson’s ‘Wonderboys,’ a new release by Dylan had once again become big news... 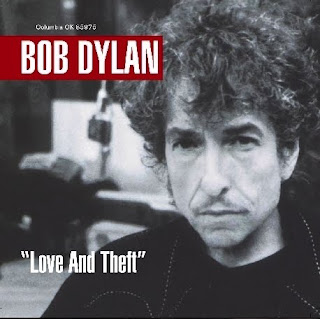 As I prepared that morning for another day in the hellhole of high school, which was to be followed by biking my way to whatever store I could to pick up the new record, I was interrupted by my father who told me of the mornings tragic events, and it was quite a wake up call, one that took a few seconds to really sink in. I made my way to school in a fog and the day seemed unreal, school was all but cancelled as we sat there in various classrooms watching the world burn (or at least that’s how it seemed) on television. A history teacher, an over-grown lady who most had utter contempt for because she was that “mean” teacher most students were scared of. She liked me in all my teen angst rebellry, for what reason I still don’t know. As I stumbled through the hallways, late for another class she approached me, I figured to discipline me for well, just about anything. She put her arm around me and said “this is your Pearl Harbor, don’t forget it or how it made you feel,” I never have.

Class, if you could even call it that, ended and I sure enough, through the fog of my mind, found my way to a store, sought out Dylan’s new album purchased it and popped it in, I figured hey, maybe it’ll get my mind off of everything. Instead of feeling like album that was released on September 11th, 2001, instead it was if the album was written based on September 11th, 2001.

“Sky full of fire, pain pourin’ down
Nothing you can sell me, I’ll see you around…”
~"Mississippi," Bob Dylan~ 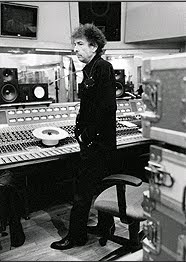 The (under pseudonym) self-produced album would go on to be one of Dylan’s most praised of his entire career: numerous 5-star reviews, another Grammy award winner, Newsweek would name it the #2 album of the decade, Rolling Stone would place it on it’s Top 500 Albums of All Time list. And yours truly? Well, friends, if you wanted to know my favorite album of all time? Well, “Love & Theft” is it. Dylan himself, upon handing a pre-release copy of "OUR record" to a member of his then-band, called it "the tightest mother-f**ker you'll ever hear." The album is, at it’s truest form, a education through the various forms of Americana music: The Blues, Swing, Jazz, 50’s rock, lounge, it’s all there. Including Civil War death ballads in the form of “High Water (for Charley Patton),” another song that in particular seemed to be driving home the events of the day with lyrics about “coffins dropping the streets like balloons made out of lead,” and as time went on over the next several weeks, other elements to come from September 11th seemed to come alive from the song, as "Wanted Dead or Dead" posters, Osama Bin Laden under a gun's scope shirts and rumors and manifestations of war became prevalent, this lyric in particular stood out:

“Well George Lewis told the Englishman, the Italian and the Jew,
‘You can’t open up your mind, boys, to every conceivable point of view”
They got Charles Darwin, trapped out there on Highway 5,

Judge says to the high Sheriff, ‘I want him dead or alive, either one, I don’t’ care,’ Highwater Everywhere”

Time stopped for that day, including Dylan’s “never ending tour.” A few short weeks after though, it resumed. Where-as most concert tours that fall saw a stark decrease in ticket sales after 9/11, Dylan’s did something else entirely: they got better. When Dylan took the stage at Madison Square Garden just weeks after the attacks and made his feelings on the city he called home for so many years in the 60’s and 70’s well known... 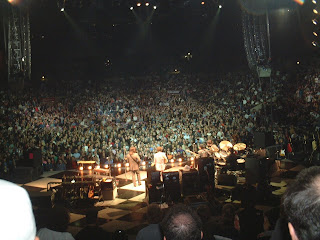 "You don’t have to ask me how I feel about this town. Most of these songs were written here and the ones that weren’t were recorded here..."

~Bob Dylan from the stage of Madison Square Garden in New York, Fall 2001~ 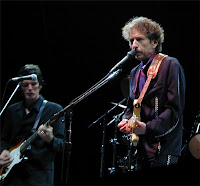 Dylan’s show, both that night and throughout the tour, opened with an acoustic harmonization of the old Gospel number “Wait for the Light to Shine,” and the shows also prominently featured another acoustic harmonization of an old number, “Searching for a Soldier’s Grave.” Dylan’s shows that fall were the height of live music excellence, and they were nothing short of healing for those who saw them. He came here to Phoenix, playing the Sun Dome, and did one of the best shows you’ll ever see, I have the bootleg to prove it. Along the way, as the album continued to garner 5-star reviews and see good sales, the rarely publicly spoken Dylan continued to let his feelings on the event known: In Los Angeles he spoke of a recent comment Madonna had made at a show there, talking about needing to “think Globally.” Dylan made a reference to the statement from the stage and said “I think it’s time to re-think that.” Later in the year he spoke in-depth with Rolling Stone's Mikal Gilmore about the day...

"One of those Rudyard Kipling poems, 'Gentlemen-Rankers,' comes to my mind: "We have done with Hope and Honour, we are lost to Love and Truth/We are dropping down the ladder rung by rung/And the measure of our torment is the measure of our youth/God help us, for we knew the worst too young!" If anything, my mind would go to young people at a time like this. That's really the only way to put it.

People who wonder why I enjoy Dylan the artist so much, well September 11th, 2001 and it’s aftermath are another reason. Just as watching Derek Jeter do a flip play to home plate in the 2001 ALDS helped me heal, Dylan’s newest record and the shows that followed did the same. The same way 'TIme out of Mind' and 'Blood on the Track's' had gotten me over heartbreak, songs like “Mississippi” from the “Love & Theft” LP, to songs like “Wait for the Light to Shine” performed live, were helping me in a whole different way. To this day they mean something more than what they are at their heart: great songs, but in that context with those performance, they were songs that can heal the wounded. Don’t doubt the power of song, just as you should never doubt the human spirit. That’s what I’ll leave you with, in this look back on September 11th from a musical perspective.