Movie Night #14 In Search of Truth...a look at the modern documentary 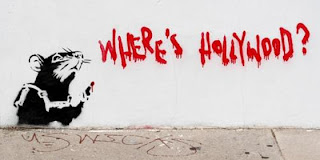 Documentaries are often pushed aside and dumped on in regards to the cinematic landscape of our local multiplex. A shame, to be sure, but more than that is a sad missed opportunity to provide the masses with something other than LCD entertatinment. If you look at recent history, Farenheit 9/11, March of the Penguins, Super Size Me, were all huge moneymakers. They turned a healthy profit at the start, which led to more screens which led to even more profit. Yet still the majority of them are at your one screen theaters often for a week or two at max. I would say the fault of this is public perception of documentary.

The sad truth is that the inherent didactic nature of a documentary is a turn off to many cinema goers. People thinking just because something is informative there is no way it could be entertaining. Again, very depressing thought about our society as a whole, that learning is such a negative attribute to a film that we must hide them away in the dark recesses of celluloid purgatory. It would seem that studio heads still think people view documentaries as a bunch of talking heads going blah blah blah about some long forgotten war their grandfather was in. Well I am here to say that is absolutely not the case. Documentaries can be amazing films, and just like any other genre there are good and bad and a whole lot of in between when it comes to quality. They also vary in style and execution more than just about any genre. I want to talk about three different documentaries, that vary in subject matter and its approach to said subject. All three of these films manage to be entertaining and educational all at once, thanks to some clever writing and some powerful directing. 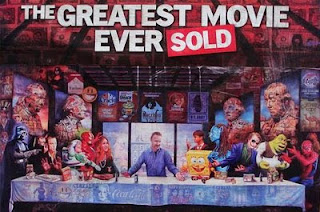 Traditionally interjecting yourself into a documentary is a big no no, but people like Michael Moore and Spurlock throw out the rules and do these films their own way. The big difference here is while Moore's films for better or worse are bogged down by his own extreme prejudice, Spurlock still strives to provide information and present it in a compelling nature. A point of view is always going to be present, but while Spurlock employs similar techniques as Moore, he does not bash you over the head with his own ideology.

With this film Spurlock sets out to show people the wide world of product placement in the media, taking us as far into the rabbit hole as possible. The way he does this is by bringing a camera along with him as he strives to finance the film he's making about product placement, WITH product placement contracts. This leads to a far more clever documentary than it first sets out to be. Often times we will see him sit down to a meeting and he will discuss the actual scene we are watching as a scene that he will shoot. Or he will mention a suggestion as to how to incorporate said product, only to have it happen 20 minutes later, either drinking Pom Wonderful during interviews, or talking to people with huge Jet Blue signs, or even driving around in his very own Mini.

The extremes of this world get out of hand and downright sad at points. We see people with the most outlandish of professions, from people who psycho analyze a business's personality to people who analyze your braind waves while attacking you with clockwork orange style torture. The contracts that these companies write up veer on the absurd, with Pom wonderful asking for final cut of the film at one point.

The self referential nature of the film helps make it a wholly unique experience when it comes to documentary. It is hilarious and often troubling what Spurlock goes through in order to finance his film. He never takes a side as to if product placement is bad or good, serving only to educate on the intricacies of this world of advertising. A fine documentary hampered only by the fact that if you don't like Morgan Spurlock, this isn't going to change your mind. An entertaining and educational film for sure, and one I'm sure most would enjoy, if they don't already have their mind made up about the director. 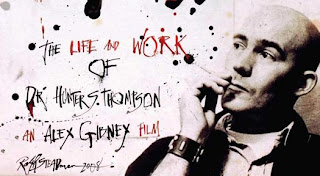 The next film is Gonzo: The Life of Hunter S. Thompson from Alex Gibney. Gibney is an extremely talented documentarian in the truest sense of the word. He operates within a much more traditional style, removing himself from the film and presenting the theme at hand through interviews, archival footage, and photos. I reviewed his most recent release, Magic Trip, earlier this Summer and now I want to dive into his telling of the life of Hunter S. Thompson.

This is a biographical documentary, a specific type which focuses on one person rather than a theme, or political issue, or event. This is the story of one of the most radical and influential journalists and the tumultuous life he led. I don't want to get into the specifics of his life too much, since Gibney with the help of Johnny Depp tells the tale far better than I ever could, rather I will speak about the form. Gibney uses archival footage and photos very well. He edits them together in order to create a narrative as well as give us the full experience of Hunter. We see him grow from fledgling journalist to full blow Gonzo insanity . He breaks all conventions in search of the truth and Gibney tries to reveal the true nature of what lay underneath this drug addled whiskey soaked madman. Gibney does this by mixing footage of Thompson shooting off guns and acting crazy, with interviews of his coworkers and family discussing how dedicated he was to his beliefs. If Hunter cared about something he would put his all into it shown no better than his support of democratic candidate George McGovern.

Gibney over lays Depp reading Hunter's words as we see pictures and video footage giving you a feeling of the mans psyche rather than relying solely on talking heads. This approach gives you a muli layered view of the man. An idea that is also revealed in the film as Hunter grows in popularity, Hunter begins to question his own relevance. People begin to want Raoul Duke more than Hunter. Much like the demons and monsters he sees in his acid fueled binges, Hunter has created a monster that has taken over his celebrity and refuses to relent. Gibney presents all this to you without any personal agenda, allowing the viewer to see into Hunter's world as we see his personal life, his party life, his professional life, and his ultimate fall into depression and suicide. A powerful movie about this specific journalist who changed the journalist landscape forever. 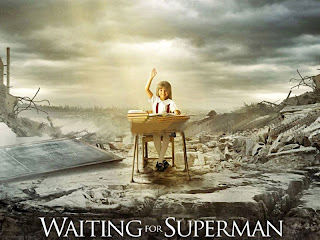 The last documentary I want to look at is the powerful Waiting for Superman, about the state of our county's education system and what a few people are trying to do to save our youth. This film differs from the other two because it is the only one with a clear and focused message. Spurlock wanted to show what happens behind the scenes when it comes to product placement with no real favor of bad or worse, Gibney showed us the life of a journalist and the influence he had, here Guggenheim is much more message driven: The education system is broken and we have to fix it. Through it all he explores some horrifying truths, including many states response to the tenure rule. New York with its room of bad teachers is amazingly upsetting.

Guggenheim crafts a well structured film alternating between stories of children struggling in the school system and trying to get into charter schools and stories of individuals trying to make a difference. All of these children want to learn and their hope is tearjerking as they enter the lottery at the end of the film. The other part is exploring the school system and individuals desperate to change it. We see a principal place cameras in his rooms only to find gambling, sleeping teachers, and complete chaos. Upon taking action the principal realizes how powerless he is in the face of this bureaucratic behemoth.

Guggenheim is definitely playing with your heart strings and doing everything he can to make you angry. The difference between here and Michael Moore is he is not doing in a slanderous or childish way. Guggenheim uses sad truths and stories of hope and teachers dedicated to their children to get the audience to rise up and join the cause. We see fancy schools that have a horrible college rate, and streamlined schools with. 90% college acceptance rate.

Guggenheim made the other rise up in arms film An Inconvenient Truth, which is of course criticized for being about global warming which is for whatever reason not accepted as truth. For anyone to say that our school system is not broken, or that his claims here are unfounded is ludicrous. Our children do not compete at a global level when it comes to education, we constantly are middle of the road and lower. Those are facts. We push people through the system with no actual learning and expect them to be ok in the real world. Guggenheim has made an extraordinary film, both moving and compelling. I urge all of you to see it, and to give documentaries a chance. After all believe me, learning is fun.

One last thought - I actually like Michael Moore....I just don't know if I would say he's actually documenting something or making a propaganda piece.