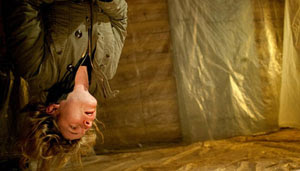 Indie horror seems to be a place full of pyromaniacs, sadists and masochists. The genre is filled with demented dreams that spring to life on screen as we see someone new trying to bring back the bloody grand guignol, or the stark brutality of the first Texas Chainsaw, or even the surreal beauty of Argento(not his recent stuff). It also has a lot of shit. I mentioned in my last DVD article that more often than not horror is a genre where people want to flex all their stylistic muscles. That's fine, and you all know I love style, but it has to serve the film. Fast cutting and loud music does not define scary or atmospheric, no matter what James Wan would have you believe. So long introduction without saying anything about the film in question? Sorry. A Horrible Way To Die shows a new director attempting to find his voice. He has moments of greatness, moments that really define what Adam Wingard will become if his films continue to evolve along the right path. Then there are moments where his immaturity springs to life. The result is an uneven bleak serial killer movie with some strong directing at times, and at others completely derivative. 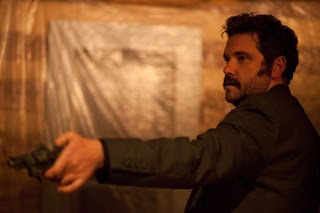 I want to talk about the performances first. The main thrust of the story is about an ex couple. The man turned out to be a horrible serial killer and went to prison only to gain an insane following through social network mediums. He escapes prison and immediately goes after his ex leaving many many bodies brutally murdered in his wake. AJ Bowen is a wonderful genre actor, the guy brings charisma and an undeniable sense of insanity. His delivery is always so calm and collective, this isn't a shy man or awkward man, but then he just releases all the evil inside of him with some spectacular kills. The darkness is always there behind his eyes, and you see him calculating his moves at every point. I don't want to ruin the end scene because I suppose most would call it a twist(we'll get to that), but he nails would could easily be a very cheesy scene and still keeps his insanity. Really hoping he continues to dangerous work like this here, I'd hate to find out tomorrow Nancy Meyers snatched him up for some film about finding out the true meaning of love on earth day with his silly english grandma in the background the whole time.

The other half of the film is the distraught girlfriend, Sarah, who is struggling to still live some semblance of a normal life. She is constantly searching for some reason or meaning to what she went through, and finds herself going to AA thinking maybe if she drank less, she would've noticed the horrible truth about her lover. Amy Seimetz plays this part with a long string of awkwardness. That kind of naturalistic acting so popular in indie films, that it can come off stilted and amateurish at times. I imagine it will be enough to turn many people off, but as the movie progressed I realized that it really does make sense for her character. She is that traumatized and really wants things to be normal, but she is weary and frightened of getting back to normal life. When this new man, Kevin, enters her life he is trying so hard, like her, to move on that they both play off each other in an awkward mess. Like I said by the end I didn't think they were bad performances but the delivery and scenes between Sarah and Kevin as they attempt a relationship are painfuly awkward at times, ultimately a decision I can respect from the director because as we see her struggle to come out of her shell more and more, the ending becomes that much more powerful and heartbreaking.

I mentioned before that the director has moments of greatness and not so great moments. By biggest gripe is that he falls into too familiar tropes in the way he uses handheld. The whole movie is practically handheld, which is fine, for the most part it lends itself greatly to the type of story he's telling and the realism that he's trying to achieve. There are two mistakes that he makes which are 1. Attempting.....something with focus, and 2. Going shaky came during tense scenes. First off, there are a few points throughout the film where the focus will go in and out, and you can tell he was going for some kind of effect, but it just falls short here. To the point where it looks like he left auto focus on. I imagine he was trying to do some sort of modern focus pull and just failed. Second people working with handheld often think that during tense scenes making the camera have a seizure will up the tension. This is another example of a technique that can be successful, but here it just looks like he read a how to book and said "tense scene make sure you move around A LOT." These are my two biggest concerns with his directing as they show a man who is immature and not confident enough in his own abilities that he tries to do basic "tricks" and they come off as such.

Which is sad because Wingard shows real promise here. The story is actually quite good, and the way he paces it is handled so well. Once the ending comes and you think about the film(which the "twist" part you all can probably see) you realize everything has been laid out for you. It was never about teasing you or giving you a mystery or misdirection, the director showed you everything and relied on your preconceived notions to assist him with his storytelling. He smartly drops all the information throughout the film, little comments made here and there and even the action in the background all give you all the information you need for the film. The whole movie is a great example of pushing the plot forward in an intelligent matter without having the characters explain everything away.

His other great success is that when he's not falling into derivative directing techniques and tricks, he manages to craft a great looking thriller. He gives us some raw and brutal imagery without over-dramatizing them with loud music(you again James Wan). The shots are disturbing and horrifying, but he ties it all together and nothing is ever glorified(heh) The film uses setting to give us a sense of how isolated all of the characters are. We constantly see Sarah alone in many of the frames. Even when she is in a public space the director continues to either close in on her or uses perspective to make it seem like she is away from everyone. As the film progresses the director lets Kevin get closer and closer to her, represented very well by how much he is allowed to be in the same frame as her. He tones down the amount of coverage used in each scene as the movie moves along and their relationship evolves. This is of course seen best, close to the end when the two of them are shown alone walking through a desolate snow-covered landscape. People often are able to use setting to relate to their characters, but this type of evolution of style over the course of the film shows real promise. I'm excited to see what's next from this director, this is exactly the kind of new talent I get excited about. Being able to see someone's growth from film to film is an exciting thing to watch. This film was definitely not a homerun, but it gives you some great insight into a young filmmakers potential. Coupled with a strong performance from the antagonist, I would recommend this to fans of the bleak horror genre, like I said the acting is sure to turn plenty off but if you can get past that there is a solid thriller underneath with far more going on that first appears. 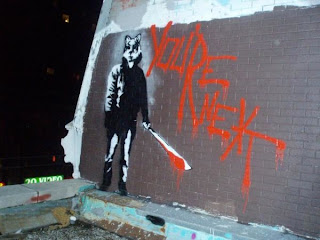 One last thought - this is Wingard's newest film, it just got picked up by Lionsgate, apparently he fulfills on all the promise he showed with this movie and made a brilliant balls to the wall home invasion film here.