There is an Eyeball in me Soup, Fetch me Musket: Corpse Bride 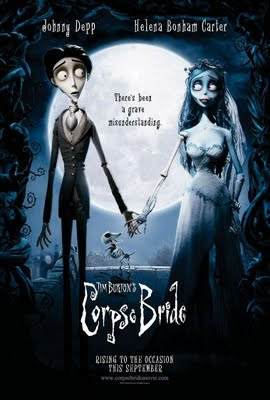 Corpse Bride
When I first say this film back in 2005, I (quite simply) hated it. I thoroughly enjoy The Nightmare Before Christmas and maybe I expected too much from this film. Hate seems too strong of a word, I enjoyed a couple of shots and that was about it. The devil take the rest of it! That was my attitude. After seeing Tim Burton's exhibit at the Los Angeles County Museum of Art this past July, wee bairn Funkowitz was intrigued by the models from this film and I decided to give it another go. On my trip to New York, I snagged a copy on Blu Ray and that plan was in motion. 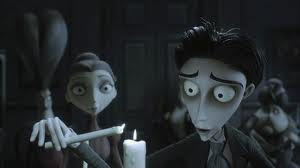 Corpse Bride is a stop-motion film which focuses on Victor Van Dort who is betrothed to Victoria Everglot, a woman he met the day before their wedding. While practicing vows for their ceremony, Victor inadvertently awakens the corpse bride when he placed his ring on her finger and is married to her because of his reciting of the marriage vows. Since Victor has disappeared, the parents Everlot, a pair of social climbing schemers decide to replace him with Lord Barkis Bittern. Bittern plans on marrying Victoria and murdering her to claim her families fortune.

As I mentioned earlier, when I first saw this film way back when it was first released to DVD, I was not a fan. However, I was taken back by the Blu Ray release. While it did not get the treatment that Nightmare Before Christmas did, it looked equally amazing with the level of textures on the both the environments and the characters that walked among them. I also thought the story improved in the six years between seeing this film. This is a big deal because I thought the story was lame and merely existed as a vehicle for Tim Burton to be weird. 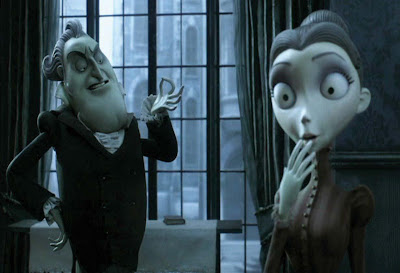 What really struck about this film was the level detail that the animators took for this production. The eyes of the characters moved back and forth when they were talking to each other. From a technical standpoint, it certainly was on par with the Wallace and Gromit film released the same year (from a technical standpoint), however the latter was a better film overall. The second time around, I also thought that the dialogue was improved from what I remember. I especially enjoyed the town crier bit and also the dialogue between the living and the dead was also quite humorous. All in all, I really enjoyed this film having seen it again. It was not the best of Tim Burton's works nor does it improve upon the standard set by The Nightmare Before Christmas but a good time can be had by all.
Posted by Manfred "Manny" Funkowitz at 2:00 AM