The Horrible CGI Costume Should Have Been a Dead Give Away: Green Lantern

From what I understand, Green Lantern is one of DC Comics' obscure superheroes like Flash, Aquaman or anyone else who is not Superman or Batman. This is the most ridiculous thing I have ever heard, the exploits of Hal Jordan and the corps would be number three (in exposure to the public) from that company. I never heard that discussed when discussing the likes of Thor (which has been canceled more times than I have fingers) or the drunkard in a metal suit. Regardless of the character's popularity, I was excited of the prospect of a Green Lantern film (he is one my childhood favorites after Batman of course).

The story of Green Lantern (the film) is a simple one. Hotheaded test pilot who is haunted by the death of his father (also a pilot) who died testing an experimental aircraft. While hanging out at his nephew's "lame" birthday party, he is spirited away by Abin Sur who lay dying in his spacecraft. With his dying breath, the Green Lantern of Sector 2814 designates his successor.

Hal then flies to Oa, homeworld of the Green Lantern Corps and gets the Luke Skywalker training regime into how to use his ring. During this time, he meets Tomar-re, Kilowog and of course, Sinestro. Around this time, Hector Hammond performs the alien autopsy on Abin Sur and somehow contracts telepathy, effeminacy, fifty-eight pounds and a forehead that rivals the guy from the movie, Mask. You know, the film with Cher not Jim Carrey.

The main villain is Galactus... I mean the embodiment of fear, Parallax (the heart of which was the former Guardian, Krona) who is tearing about the universe consuming fear all off-screen. Sinestro leads a team of Lanterns to meet Parallax, they proceed to shoot spitballs at him and he swats them away like flies. This fight put the notion of the Corps adopting the tool of fear in Sinestro. Parallax then decides to take his tour of destruction to Earth, the corps refuses to help Hal Jordan and Hector Hammond begins the 7.5 minute screaming session which is three-fourths of his screen time. After accomplishing nothing and "failing" Parallax, Hammond is consumed by his lord, who in turn is sent crashing into the sun. 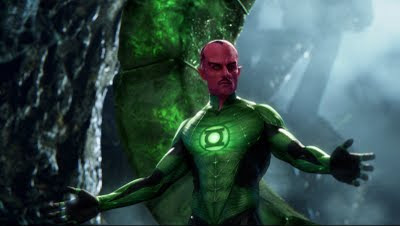 Much like Bence, I am a huge fan of Green Lantern. In fact, Sinestro is the front runner for the name of a future Funkowitz son... At least in my mind. Anyway, unlike Bence, I exercised caution approaching this film. Sure, I was excited but I did not want to over hype it and end the night with me crouched in the shower crying. Needless, to say the movie was "ok," it could have been great but it was it had some issues. Before going into all of that, I think I should discuss the positives of the film. Foremost, some of the roles were immaculately cast such as Geoffrey Rush as Tomar-Re, Michael Clarke Duncan as Kilowog and of course, Mark Strong was amazing as Sinestro. The special effects were solid and Oa rivaled how great Asgard looked in Thor. 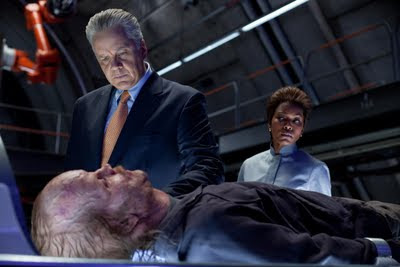 Now, we come to the bad part of Green Lantern as a film. First was the screenplay and its FOUR screenwriters (two of which are horrible comic writers), a lot of the script bordered on sitcom writing. I was hoping to limit it just to Taika Waititi's character's lines but everyone in the cast had a line which left me thinking... "Are you kidding me that someone wrote this!" In particular, Hal Jordan asking the Guardians for permission to protect Earth. Seriously, is that not your job? I guess two hundred monkeys at two hundred typewriters will not result in Shakespeare. After all, it was the best of times, it was the blurst of times. Anyway, the film also had some issues of casting, we get it... Blake Lively is easy on the eyes, spoiler alert, she cannot act. Which brings me to Peter Sarsgaard, who outside of the screenplay is the worst part of this film. Most of the time he is either playing the worst paraplegic in cinematic history, screaming or being a "creepy uncle." Also, even Reynolds is not safe, he embodied Hal Jordan one moment and another he was just staring out into the distance breathing out of his mouth.

All in all, I think that the review were pretty harsh about Green Lantern, it was not as bad as X-Men Origins: Wolverine, X3, Fantastic Four 2 or even Superman Returns. It could have been a great film had three of the writers not been involved. It kind of seemed rushed in the grand scheme of things (as did the plot). This made it something that seemed more in line with films based on Marvel properties than DC. At least, a sequel has been greenlit and hopefully, they will remedy the errors of this film.

Also, thanks for the end credits scene which did not set up why a certain lantern goes bad... After all, why tell the origin of Hal Jordan's nemesis and one of the all around great comic villains? It is only a great story... Seems apropos considering the rest of Green Lantern.
Posted by Manfred "Manny" Funkowitz at 10:08 AM