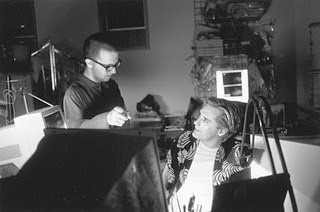 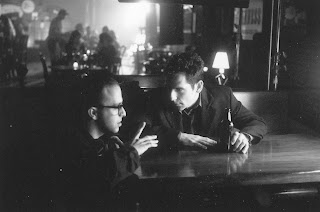 The son of geek legend Lawrence Kasdan, Jake Kasdan has made five films to date. With varying degrees of success he has crafted a solid career made on a foundation of subtle comedy and confident direction. Today we are going to focus on the two films which he wrote, Zero Effect and The TV Set, as well as his latest and easily most successful, Bad Teacher. 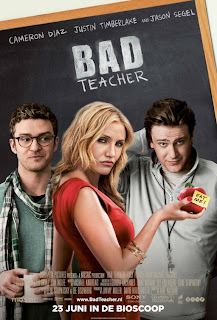 We're actually going to work backwards. I'm happy Kasdan is getting some recognition off of this one. Hopefully this will allow him to make more of the films that he writes himself. That is where he really shines and has a great comic voice and smart stories, but we'll get to that. By now you al know the story....it's really quite simple, Cameron Diaz is a bad teacher. Essentially that's it. You can guess most of the plot turns just by the name, for as much spite is in her she's not heartless, as seen when she helps out a lonely boy, also she obviously realizes maybe she enjoys teaching. And of course there is another teacher who is a "good" teacher who is out to get her which leads to hilarious situations. Yes it really is that broad, but Kasdan manages to make it work. It's funny sure, but definitely not the high light of his career.

Kasdan creates a world filled with exaggerations, not that everyone is playing "big" but extremes are definitely pushed. Lucy Punch as the bubble gum nemesis of Diaz is great and the repressed fury inside of her grows until the end and seeing her unravel is really awesome. Timberlake is passable as the rich uber nerd whom Punch and Diaz fight for. I love that Timberlake really has no fear at embracing weird. Kasdan asks him to do some daring things which again Timberlake does ok, but you can definitely see the willingness to jump in feet first. Never again will I think of dry humping the same way.

So how about Diaz? The movie really rests on her shoulders and her ability to be an horrible person but still allows us to be empathetic.This movie really would not have worked at all if Cameron Diaz couldn't pull off being such a narcissistic asshole. She encompasses the role well without ever coming off as unlikable. She is so extreme and does it with such fervor that it plays to the audience well, her battles with Lucy Punch and clueless courting of Justin's nerd character as well as her amazing teaching style all add to the charm of the character. She plays it so well that she is able to let little bits of sympathy come out at just the right moments that we do end up rooting for this boob obsessed jerk.

Jake is a fine director and while this is definitely his weakest effort, he adds a nice amount of quirk and strange to this effort. Its a a funny film with some nice performances and a few laugh out loud bits. Again, I'm happy it's proving to be a success so hopefully Jake can get back to where he really shines which is writing and directing his own work. 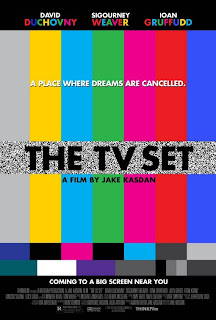 The next film I want to look at is The TV Set, starring David Duchovny and Sigourney Weaver as well as Mr. Fantastic. This is a great little film about the all of the absurdity that goes into bringing a TV show to the air and how network TV mutates and distorts everything around it. I love that Kasdan insists this is not a satire and nothing in the film was exaggerated. The story is about Duchovny a semi successful writer about to get his big break as his "masterpiece" is being brought to pilot by a network. We jump in at the beginning of casting and follow the progression all the way to upfronts, and in the process we see his project mutate from intellectual dramedy about a guy returning home after his brother commits suicide to an lcd confused mess with farting prison inmates.

The first scene sets the tone perfectly for how the rest of the movie will play out and also gives us a hilarious view into the auditioning process. Duchovny has his star picked out, complete with matching beard. He gives a great subdued and restrained audition. But of course the studio heads like the broad over the top actor who insists on using 90s slang. Thus begins the first of many compromises that must be made. I don't want to go too much more into the plot because the continuing requests of the studios really add to the great humor of this piece. One of my favorites being the study they did proving that 80 percent of people find that suicide is depressing, or watching a show "cause y'know...he's fucking crazy"

This is obviously a far more personal film than Bad Teacher and Kasdan really shows off some great comedic style. He keeps the whole movie with a very casual feel, using a lot of hand held almost to the point where we feel like we're watching a documentary. This works perfectly since Kasdan wanted to show a true movie about the creation of television. Kasdan keeps his sets very minimal, we are rarely outside and when we are it is usually on a studio set. We really get the feeling that as much as his wife is pregnant, this is Duchovny's baby and his whole life is focused on it. Outside of the studio we realy only see him at home. We see a little more of Ioann Gruffudd's life outside of the studio, but his sub plot is about the studio eliminating his personal life as we watch his marriage crumble. So he is less and less at home.

Kasdan backs up his solid direction with an incredibly witty script. Duchovny plays the straight role here seemingly the only person who cares about artistic integrity. Gruffudd's loss of innocence arc is very subtle and well played. Sigourney Weaver has a meaty role which she fully sinks her teeth into. She steals the show as the tough as nails studio exec obsessed with ratings. Fran Kranz really has a tough job at playing an actor who tries so hard to act. His inability to do subtle ranges from awkward accents, to dead seriousnes that makes the other performers uncomfortable They all spout Kasdan's words with hilarious results. Now this not laugh out loud comedy, this is dry wit laughing at the reality of behind the scenes television. The scene where they test new names for the show is so small but so funny.

The TV Set is a small film that not nearly enough people have seen. I've seen it a few times and it is definitely a movie that grows on you. I liked it the first time I saw it, but now I love it. I think Kasdan really has made a great satire of the entertainment industry, even if he insists its reality. But even still this is not Kasdan's best work. Kasdan jumped onto the scene with Zero Effect his best work to date and a truly unique take on the private eye film. 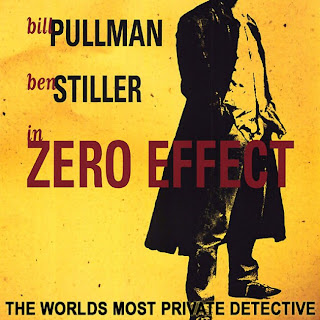 Zero Effect stars Bill Pullman as Daryl Zero, the worlds greatest private eye. The film starts off with Ben Stiller in a refreshing against type role as Zero's frustrated assistant, giving two very different descriptions of Zero. We then get introduced to the insanity and brilliance that is Zero, in all of his Hawaiian shirt glroy with acoustic guitar. Quickly we realize that along with brilliance comes paranoia, anti-socialness, and well jerkiness. His house completely represents his psyche. Cluttered and advanced(for the time at least....multiple towers have led to a single desktop and tablets as of late) and shut off from everyone else...connecting through other humans only through phone and the computer. He begins his memoirs as he discusses his philosophy of observation and objectification. This story is about how he comes to question his own code and what happens when he meets his equal.

The tale is a simple tale of missing keys, but like everything else in this film there is so much more beneath the surface. The case draws Zero out from isolation into the naturalistic Oregon as he is forced back into society and Pullman plays the awkwardness with such confidence and restraint that I never he possessed. He is a man of multiple personalities afraid to be Daryl Zero for whatever reason, but as the film progresses we see his true nature come out as the case begins to unravel and Daryl rediscovers the importance of human connection. 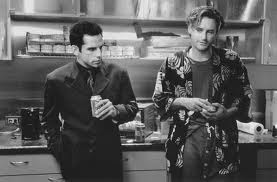 I love detective stories and this is one of the most unique tales I have ever seen. Zero is an amazing character that should have more adventures but as for now this one is perfect. Kasdan has crafted such a clever picture filled to the brim with wit and interesting characters. By far his best work, he shows us through each of the characters just how important human connection is, even if your business is reliant on pure objectification. We see how love saves everyone in the picture and never in any kind of sappy way, the films message is kept subtle with most people assuming the film is about one mans treatise on being a PI. Kasdan has never reached this height of greatness again. The TV Set shows how talented the guy can be when doing his own work, but even that isn't as good as his first film. If you haven't seen either of these I strongly suggest you search them out, really solid work from everyone involved. And again if anything you get to see Stiller doing something different for a change. As for Bad Teacher...its a funny movie that hopefully gets Kasdan some credit to continue doing his own work.

One last thought - So what do you think the TV Set was about? His failed attempt at bringing Zero Effect to the small screen or his work on Freaks and Geeks?