One Hundred and Thirty Pages that Redefine Your Concept of Living: The Diving Bell and the Butterfly

PORTEmaus Literature Society entry no. Six: The Diving Bell and the Butterfly 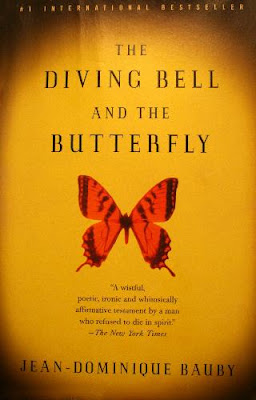 The Diving Bell and the Butterfly by Jean-Dominique Bauby
After reading three books aimed at teen readers, I could not think of another book to read. While working a shift at my internship, a coworker and myself starting discussing life, dignity and the concept known as a "suicide tourist." While talking about the Frontline program examining this phenomenon, I was reminded of such films as The Sea Inside and the adaption of this memoir. I decided to read the latter and it was a great decision on my part. I admit, I patted myself on the back for this one.

Le Scaphandre et Le Papillon ou The Diving Bell and The Butterfly tells the experience of the Editor of the French edition of Elle, Jean-Dominique Bauby after his stroke which put him in a coma. Upon waking, he found that he could not speak, paralyzed and that he was suffering from locked in syndrome. In spite of this, Bauby was able to convey this memoir through a series of blinks.
This book was nothing short of amazing, Bauby displayed a mentality that if I were in the same situation most likely would not be present. Sure, I would love to be alone with my thoughts but to lack speech or basic motor functions while being aware of my surroundings would be unnerving. Couple this sentiment with the impact that it would have on my kids and I would be blinking to have the cord pulled.

Jean-Dominique Bauby
Locked in syndrome means many things, perhaps the most bothersome besides discomfort would be the slow passage of time. I expected Bauby to bitter or downtrodden about his predicament. While he was not happy about the situation (after all, who would be), to hear how he spent his days making trips to far off lands or playing out the roles of his favorite literary heroes, the reader understands he is making the best of the situation he is in. All the while, he maintains a wit about him, passages such as his abandoned desire to rewrite classics such as The Count of Monte Cristo even elicit a chuckle.

In the end, you cannot help not feeling bad for Bauby... Not simply because of his plight, it is more about the things that he will miss out on like his children growing up, seeing his father again before he passes (Jean-Dominique compares his Father being stuck in his apartment to being "locked in"), more importantly, he will never be able to do the simple things we take for granted like speech or satisfying the urge of an itch. This book is a triumph of language considering it was written with the use of one eye. It was a testament to one man's mind that remained sharp after a massive stroke... Most writer's do not produce works at the level that Bauby had (without having suffered an accident of that magnitude) and yet, he was able to create a masterpiece of one hundred thirty pages that speaks volumes.
Posted by Manfred "Manny" Funkowitz at 5:20 PM

Email ThisBlogThis!Share to TwitterShare to FacebookShare to Pinterest
Labels: Elle Magazine, France, Frontline, Jean-Dominique Bauby, Suicide Tourist, The Diving Bell and The Butterfly, The Sea Inside