90's Nostalgia in the Form of a Bar Band from the Desert: Gin Blossoms live... 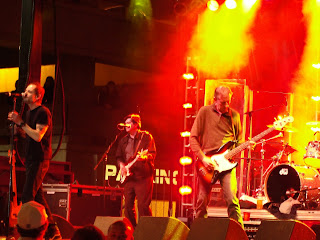 Beautiful Melodies telling you Terrible Things Vol. VII
This is a show from earlier this year, but I came across the recording I made of it on my Tascam recently, listening to it reminded me what a solid show it was, and what an unfair shake both Gin Blossoms and other 90’s bands get. 90’s nostalgia is strange because people are quick to talk about how great, say, Nirvana was (and they really were), but like to pretend the rest of the decade fell apart into boy bands and week electronic pop, but in truth, most of the 90’s was rather solid. While by the end of the decade most of what was dominating the radio was terrible (not all, but most) it’s the punk/grunge, folk rock revival and alt rock that I like to take from the decade... 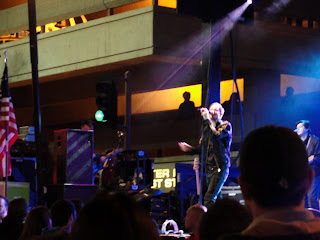 The Show – Arizona Stands Together: The show was meant to be a celebration of Channel 12 moving to a new downtown location, sort of a massive kick-off party, but the tragedy in Tucson happened shortly beforehand, so it became more about Arizona standing together and overcoming things. It was a good time.

The Venue – Downtown Phoenix: In the heart of the streets of Van Buren (not the heart of hooker-town Van Buren, but business and downtown-downtown Van Buren), which made for an interesting setting. Also, let me add, Channel 12, quit calling it 200 EVB, not only does that sound increasingly stupid, but it makes it sound like your embarrassed about being located on the big VB. Anyhow, as I said, they closed down a couple blocks on Van Buren to put this thing on, the big festival-esque stage right in the heart of an intersection (check out the streetlight just behind singer Robin Wilson’s head) and the place in general sort of felt like a small-scale music festival. Lots of people, vendors and chuck wagons (aka portable food venders) and other stuff going on, it created, overall, a fun atmosphere. Or that may have been the Hooters girls talking to me, thanks again ladies for those free wings and coupons. Shortly after watching President Obama’s speech, the Gin Blossoms arrived. 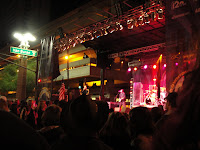 The Band – Gin Blossoms (not Spin Doctors): The problem with the Gin Blossoms is the perception of them, as I mentioned earlier. Because the 90's are dead and because of the massive radio success the band had circa 1993-1996 (even today, if you flip across the various rock stations, it’s hard to go thirty minutes without hearing “Hey, Jealousy” once, now THAT is staying power), people look at them either as some record company tool or, as PORTEmaus’ own Manny F. did, get them mixed up with someone like the Spin Doctors. The bottom line? They are the best band to ever come out of Arizona, and their songwriting (namely speaking about the Doug Hopkins era) is among the best of that era in the song categories of “angry young man” and “alcoholic melancholy.” I won’t talk about how the members themselves have treated other people in their career (including former band members and managers), but I’ve hung out with various members after shows before and they’ve always been extremely nice to me, so I'll leave it at that...

Whether or not you like the work the Gin Blossoms have done since reuniting in 2002, which include two LPs: 2006’s ‘Major Lodge Victory,’ and 2010’s ‘No Chocolate Cake,’ the band can still bring it live. Maybe not like 1989, but still better than most 90’s nostalgia acts. Where-as the most recent album found itself sounding more California-power-pop than like a bar band from the desert, live is a little more close to home (so to speak).

The band came on a little after 7pm and, starting with the signature harmonica riff from lead singer Robin Wilson, the band opened with maybe it’s best known song, “Follow you Down,” and immediately had the crowd going. One thing you have to give Wilson, is his undeniable stage presence, he does all he can to get the crowd into. In between song banter is one thing, but Wilson will put the microphone in the crowds faces during sing-along chorus’, hand out tambourines to fans to use, sing into peoples cell phones, take pictures, start claps to the beats of songs, high fives, whatever he can. You can’t say the guy doesn’t try to get the crowd involved. The rest of the band was in solid form as well, Jesse Valenzuela, who seemed to take over lead-songwriter duties after Hopkins left/died (despite Wilson having better tunes that 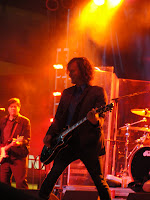 get left off records: “To Hell and Back” and “My Polaris” anyone?), wasn’t as chatty in between songs or up-front, offered some solid vocal harmonies throughout, while Scotty Johnson was all over the place. He seemed to have both solo-itis and Camera-itis consistently shoving himself in front of the camera and trying to show off his skills. I like Scotty, but it was a little over-done. I can’t say I didn’t a little when he botched a small part of an other-wise awesome solo during “Hands are Tied” while showboating. Speaking of that performance, while that song isn’t my favorite off of ‘New Miserable Experience’ (try listening to that album top to bottom and telling me it ISN’T great) it was here, Scotty and bassist Bill Leen really let loose on the second half.

As the show trekked on, the band moved through a mixture of their best-known hits, as well as songs of their two most recent records. “Don’t Change for Me” and “Miss Disarray” were much better live, as it allowed the band to come out on the songs, and not be held down by the watered-down mixes the album held. However, “Dead or Alive on the 405,” a song with a decent enough story about being in a pick-up band, still sucks no matter how you cut it. During this tune someone mentioned to me “This isn’t from when Hopkins was in the band was it?” I looked at them, and simply replied: “Do you really think Doug Hopkins would allow this song on a record?” They realized how dumb the question was to begin with. So while the cuts from ‘No Chocolate Cake’ fared some better some not, songs from 06’s ‘Major Lodge Victory’ came out very nicely. “Long Time Gone” was a favorite of mine from ‘MLV,’ I felt it was close to that desert bar band sound, and I thought John Hampton’s original mix before Valenzuela made off with the record to California to re-mix it to sound only half as good (his mixing on “Gin Blossoms live in Concert” was particularly bad, sounding as if it only took the source from soundboard, leaving it sounding dead without any open air feed) showed this more-so. As did the performance here alongside another MLV cut, “Learning the Hard Way” (aka “Follow me Down part II”). 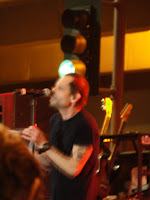 It’s the classics people came to see, and despite being light on 1996’s ‘Congratulations I’m Sorry,’ they delivered, “Found out About You” screamed classic 1990’s from it’s hauntingly beautiful opening riff all the way through to the end. The rest were there too: “’Til I Here it From You,” “Allison Road,” “Hey, Jealousy,” “Until I Fall Away” and, as Robin introduced it, ‘Arizona folk song,’ “Lost Horizons.” He usually introduces it as a Tempe drinking song (it is, just remember the Rimbaud-inspired chorus/hook: "I'll drink enough of anything/to make this world look new again/ drunk, drunk drunk in the gardens and the graves"), but I suppose for a show for a good cause and being televised live on a local NBC affiliate (fun fact: a friend of mine was directing the live telecasted concert), he toned it down. I didn’t really know what to expect from a free show, or how long it would last, but in the end the Gin Blossoms played 16-song 75-minute set, and I certainly didn’t complain. In fact, the only thing to really complain about was the small VIP section near where I was standing. VIP’s seem to have the feeling that being a VIP makes them relevant somehow, they would show up out of nowhere, not even near the beginning of the concert, and just push their way through, never even muttering an “excuse me,” and head in there. I sarcastically shouted more than a couple “oh, excuse me!...oh excuse me again!” at these idiots. The Blossoms themselves have mocked such people, on the afore-mentioned “Live in Concert” CD at one point Robin Wilson gives out a sarcastic “Woo-hoo to the VIP section!” before exclaiming they’d have more fun in the pit. Besides that and the drunk Allen Ginsberg look-a-like who smelt more than just a little like urine coming by us a couple of times, there wasn’t much to complain about during this show.

Highlights of the Night: “Pieces of the Night,” one of the best Hopkins songs ever, about a night at the bar where you realize that deep down you’re not happy there, yet you end up there every night not realizing it looked and sounded better from afar. Rarely played live in years, it was not only great to hear (even though I miss the driving piano from the album version) it was more-so great to here Wilson give a shout out to Hopkins. I’ve actually yelled out things like “Doug Hopkins is still alive!” after they’ve played songs of his without giving him any credit, so for this, I do give him props.

Overall: “Dead or Alive on the 405” killed the momentum that had built during an extremely strong first half of the set, “Lost Horizons” and “Long Time Gone” back to back in particular were a rather blistering duo, but they gained it right back for the home stretch, ending with an always good to hear “Hey, Jealousy.” There’s no doubt that live, Gin Blossoms are a ROCK show, and that’s what they brought and delivered. 4/5

Tuneful of Sugar: For those who find pictures and words to not be enough…


Gin Blossoms - Pieces of the Night, AZ Stands Together by Hudson-Hawk
Posted by Hudson Hawk at 9:13 PM