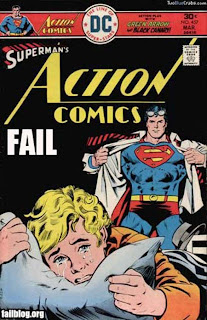 So after my wishful Biff Tannen Blackout moment I tried to think what is it about Superman that is so douchey. When you think about playing super heroes as a kid, everyone had super powers that they called out. Flight, Strength, etc..so you'd get started and you'd take someone out: "I shot you with my laser eyes" "Aw you got me".

But every time.....there'd be that one douchebag kid....who couldn't tolerate dying....and would continiously add powers to themselves to stay in the game:

"Na uh...I can fly faster than a speeding bullet"

"Ok....I shot you out of the sky with my fireballs"

"Na uh...I am impervious to fireballs, bullets, missiles, and anything else"

"Ok...I'll just freeze you with my ice powers"

"Na uh...I can shoot heat lasers out of my eyes to melt your ice"

"So...I can freeze you with my ice breath"

"Why do we still invite this kid to play with us?

That's Superman. The douchebag kid that gave himself every power he could think of. The folks at DC probably had to come up with Kryptonite just to be able to create some sort of drama in the story telling. So if your a grown man who still worships Superman or tries to compare yourself to Superman (ie: put Superman stickers on your truck, get a Superman tattoo - i'm looking at you Shaq) you're a simpleton. And so is everyone in Metropolis apparently. An office full of journalists who can't figure out that the only difference between Clark Kent and Superman are cheesy glasses! Holy Hookah Smoke, Batman!

And by the way, Superman who is considered to be as American as Apple Pie is an illegal alien. LITERALLY. Where is this guy's birth certificate? Sure he's saved Metropolis numerous times. It doesn't matter how good a job you do, he's here working Illegally! Where's a comically fat/racist/fascist sheriff when you need him? Let's raid the Daily Planet and see what other kind of illicit activity is being harbored there.

The point in all of this is that part of what makes a hero appealing is the vulnerability that they may have to balance out there superness. If you hog all of the power and have none of the weakness there is actually another adjective for that. It's called a Villain. And further more, if you idolize someone who is power hungry and denies their weaknesses...It doesn't make you youthfully cool.

It makes you a perfect spokesperson for Massengill. VINEGAR SON!
Posted by Gonzi Supreme at 12:19 PM