Why Does Anything Pertaining to Roswell Have to be Crazy? Personally, I Think That Episode of Futurama Set in Roswell is What Happened There. 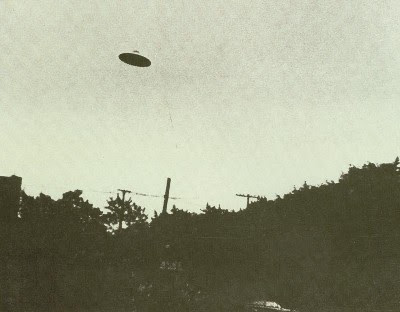 You guessed it. Pie Tin on a string. Why do I care more about the pie that was once in it than the farce of a UFO?
Conspiracy theories abound as to what happened in a tiny town in New Mexico way back in the year that was 1947. Some say it was a weather balloon, others aliens and many felt that the cow jumped over the moon before running off with a fork and spoon. I am not a conspiracy theorist and frankly, I do not care what the government found/ later covered up. However, I find the latest theory of what happened in Roswell to be downright absurd (Although, I would read the book about Area 51 behind it because it seems really entertaining... I hear it is a comedy).

Let me just break it down for you. It has been two years since Hitler and the dreaded Nazi scourge were defeated... The world was a happy place, Americans and Soviets were skipping through moist meadows as super best pals. Oh wait, that was my spec script idea about an alternative history of the Cold War, I called it the "Happy War." Evidently, Joseph Stalin or Ioseb Besarionis dze Jughashvili (if you are nasty) decided to get a rise out of the Yanks by sending an odd shaped aircraft full of malformed humans or byproducts of experiments conducted by none other than the angel of death himself, Josef Mengele.

Truth be told, this book sounds like a bad concept for an unproduced Indiana Jones film (I am still looking into whether or not Annie Jacobsen is George Lucas in drag). Ever the realist or iconoclast, the fact that the events of Roswell, New Mexico are still classified is --for lack of a better word-- dumb. If there is intelligent life out in the universe, cool. If there is not, then that is cool too. Not to be repetitive but I really do not care. What tends to irk me is when someone trots out another theory to what happened there.

Frankly, if there is any intelligent life forms out in the universe, I doubt they would want to come here after picking up our radio waves in space. Have you seen what happens to Aliens in film and television? The government nearly killed ET and Alf ate cats. Seriously though, the message is this: if you are extraterrestrial you are dead. However, if you are a creepy purple dinosaur than by all means play with our children.

Much like all things, man would like to know if he is alone in the universe (after all, we are smaller than a speck of dust in the grand scheme of things). I suppose that is why events such as Roswell continue to be brought up. Yet, the fact that book about Area 51 (not the video game but the airbase) seems like the wrong place to be discussing something as random as Nazi experiments piloting an odd aircraft to spark alien paranoia. It is the place where experimental aircraft are tested such as the SR-71 Blackbird, F-22 Raptor and the flying geometric shape, F-117 Nighthawk (these technological innovations form the basis for an interesting book) not where aliens are cut open and their insides poked at. Where do people come up with this stuff... And they get paid for it? Seriously. I am in the wrong field.
Posted by Manfred "Manny" Funkowitz at 11:08 PM