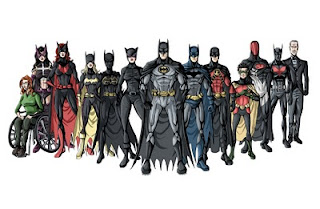 We have had some important milestones here at PORTEmaus lately. We recently have jumped our average hits a day from 5(thanks babe) to almost 80 a day. The site passed its year birthday and good times and cake were had by all, but today we reach a milestone which marks the start of the next stage of PORTEmaus. Today we pass 100 posts. Spearheaded by visionary Manny Funkowitz, the site continues to evolve every day. At the beginning of the year I joined the team, and most recently we added two new contributors, Gonzi Supreme and Hudson Hawk. Both men have had amazing success with their contributions. So that brings us to now. I want to celebrate 100 posts and all of the other milestones we have been having here at the offices of PORTEmaus, and who better to celebrate with than family?

My definition of family has never been so strict as to only include blood relatives. For the longest time i thought my godfathers family were all my uncles and cousins. Until i turned thirteen and i learned the shocking truth. Even now i consider my two best friends brothers. Family is what you make it it is where you feel at home and the people that matter the most to you.

Here at PORTEmaus we have our own family. It should be obvious that we all know each other quite well, with myself marrying into the crew. So today before i begin celebrating with my family here on the east coast i want to take a look at one of nerddoms most important "family". The family that Batman surrounds himself with.

Batman is of course a long time favorite of any good nerd. I've mentioned before that Morrison's run is nothing short of literary genius, but recently with the return of Bruce Wayne they have been playing with themes of family more and more. So i want to take a look at a few examples of how this Batfamily comes together. 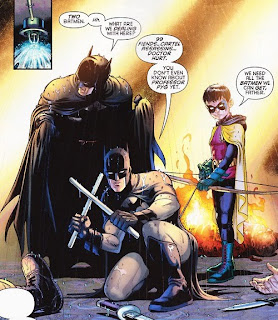 The first instance i want to talk about is the moment when Bruce Wayne returns from time to help out Dick Grayson and his biological son Damian Wayne. Remember the article is titled NERDLERT, so those of you who don't know Damian don't realize how powerful his statement is. For him to admit that they need all the help they can get is amazing and for it to be the help of Dick Grayson his new mentor and surrogate brother, as well as respecting his father is the nerd version of a tearjerker.

What i love about this is that it shows the intricacies of how this family operates. Here we have superheros so of course there reunion couldn't be at a coffee shop, for Bruce he is reintroduced to his old protege and son in the middle of a huge fight against Wayne Manor. Yet Morrison manages to hit all the emotional notes correctly. We see Bruce confused as to seeing Damian in the costume, in this panel we see Dick making his case for himself, and of course we see Damian aligning himself with Dick. Towards the end of this story Bruce tells Damian that he was the right choice for the new robin and that he was proud of him. On a personal note this issue of Batman and Robin is my son's favorite issue, he loves it when i do all the sound effects of the heros fighting. This is an issue that I love sharing with him, because i know he sees all the pictures and his favorite superhero doing "cool" stuff, but for me i get to show my son one of my passions and share a story about a family coming together to combat a common enemy. In the end these batman stories are all about Father's and sons. 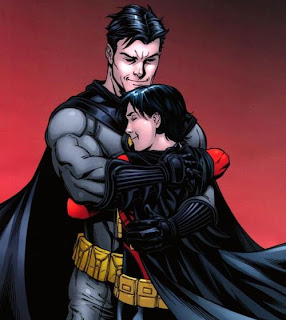 Ok i lied. The previous instance was not a nerd tearjerker...this is. I know out of context the picture can even seem a bit silly, but I remember seeing this for the first time and being overwhelmed by it. Here we have the first reunion of Tim Drake and Bruce Wayne. Those not in the know....Tim Drake was Robin before Damian...and before Bruce had gone through time he officially adopted Tim as his son. The scenes leading up to this are the two talking about "work" until Bruce tells Tim to pause for a moment. Then this panel. It shows just how much love Bruce has for his adopted son. There are no scenes of Bruce hugging Dick or even Damian but here, Bruce takes the time to give Tim the respect he deserves. I know Mr Funkowitz has a soft spot for this picture so this one is definitely his. 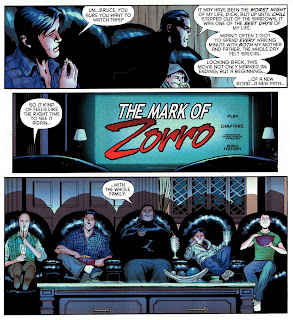 Lastly this is the picture that inspired me to write this. Here we have a group of people brought together by tragedy and they have formed a family. Not only that but they have formed a group of superheros who go around saving the day so others won't face the same tragedy. But here in this panel we get to see them being people. Here they just sit around together and watch a movie and eat popcorn. Tomasi nails the moment and we get such an understanding of the relationships between each of the characters. It is rare in a comic that a writer will let his hero do "frivolous" things. Everyone is so obsessed with getting to the next bad guy that moments like this are special. Those of you who read me on a regular basis know that for me spending time with the family and having a Movie Night(hint hint) is an amazing night.

So with that i submit the 100th post to this fair blog. I now have a new family with which to spend my remaining days. All of you here at PORTEmaus are special to me. Being able to write about what i'm passionate about and have you read it is amazing. I hope you get some enjoyment out of it as well. The way we're going we'll be here for awhile constantly evolving and adding new additions to the family. So celebrate with us drink some champagne, take a shot, drink some coffee, whatever you do. You all helped us reach this state and we are grateful to you all.

one last thought - Fringe is rocking so hard right now....don't worry i promise Movie Night will be the next article i post up.
Posted by Bence at 6:17 PM