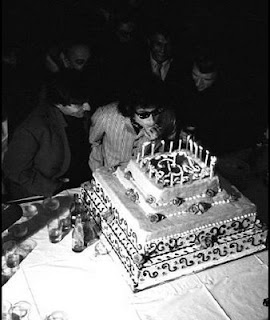 I should be posting my "New Tune Tuesday" at this moment. But I'm not, however, I will at some point. It's not everyday the most influential songwriter of his era turns 70 years old though, so go with it...

“Shadows are falling and I’ve been here all day,

It’s too hot to sleep and time is running away,

I’ve still got the scars that the sun wouldn’t heal,

There’s not even room enough to be anywhere,

In the Spring of 2009 Bob Dylan released his 33rd studio album, ‘Together Through Life.’ I felt it was quite an ironic title, because for me, and so many others who follow his music and music in general, Bob Dylan really has been there with us all the way, together through life. Had there been no Dylan there almost certainly been no link in the chain for me to have met my soul mate. I would have never been led to a number of poets, authors, filmmakers and musical artists due to their influence on Dylan or his influence on them. I certainly wouldn’t be sitting here writing for this website. Not about music anyhow. I’m not the only one either: Woody Guthrie, Allen Ginsberg, Dave Van Ronk, George Harrison (who said the Beatles music would be long forgotten before Dylan’s), John Lennon, Mick Jagger, Johnny Cash, Eric Clapton, Bono, Martin Scorsese, Bruce Springsteen, Muhammad Ali, Kurt Cobain, Maya Angelou, Bruce Dern, Mickey Rourke, Mick Foley, Nick Cave, Dan Auerbach, Jack White, Rick Rubin, Lucinda Williams, Jason Mraz, John Mayer, Scarlett Johansson, Quentin Tarantino. Just a few artists who have expressed their love of Dylan. You might say you’re not a fan, but give me two or three of your favorite artists and I’ll tell you a song they covered, a quote they said or a influence of his work on their own…

“For years they had me locked in a cage, then they threw me onto the stage…” 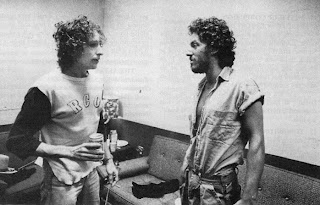 I also look at/think of the Peanuts cartoon I posted above, and both find humor and sadness in it. Because it’s true, no one stays young forever. One day Dylan, and all the rockers from his era, will be gone. The day is coming on quicker than anyone would like to admit. With each passing day and each release, Dylan continues to walk further into territory no one else ever has. Part of just the second generation of rock n roll, no other artist has stayed so relevant for so long into their life. All the rockers of the 50’s were dead, retired or irrelevant for one reason (or controversy) or another by the time the early 60’s hit, so by the 70’s music was looking for it’s “new Dylan,” because at that time rock was considered a young man’s game, not for those in their 30’s. Alro Guthrie, Harry Nilsson and most notable Bruce Springsteen, among others, were given the title. When they met backstage in 1975 at a Rolling Thunder Revue show (see above pic), Dylan shook Springsteen’s hand and said “So, I hear you the new me?” Springsteen would be the first to admit the new Dylan turned out to be none other than Dylan himself, going back on the road and releasing some of the most critically and commercially successful music of his career…a decade after what most would consider his artist prime.

“If you ever go to Austin, Fort Worth or San Antone,

Find the bar rooms I got lost in, 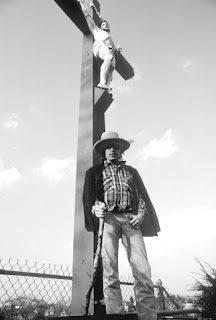 Dylan's return to mainstream critical success in 1974-76 wouldn’t be the last time, either. 1983, 1989, 1997, 2001 and 2006, what do they have in common? All years Dylan released albums considered great or even masterpieces, long after his prime was supposed to be done. Over the last 15 years Dylan has won a slew of Grammies (including for ‘Album of the Year’), an Academy Award, a Golden Globe, he’s been honored at the Kennedy Center Honors, got a Pulitzer Prize, become a NY Times best-selling author, had an Award-Winning Radio show that highlighted him as a historian of music, visited the White House, become the oldest living person to release an album that hits #1 on the charts (and then performed the same feat again three years later) and performed for the Pope who then did a sermon based on the lyrical content of a particular Dylan song. Pretty good for a guy, who in 1964, was called “done and finished, but at least he wrote a few good songs before it happened” by a very prominent voice in the folk music community. If Dylan has taught you anything, save for how to do a “comeback album,” which he has one or seventeen of, it’s you’re never down and out. You also never stay the same, times change, artists change, always be in that state of change and becoming, never be happy with what you are, but evolve yourself and your art. Dylan the folkie, Dylan the protest voice of a generation, Dylan the beatnik surrealist, Dylan the hipster rocker, Dylan the reclusive family man, Dylan the country singer, Dylan the gypsy, Dylan the big band leader, Dylan the Gospel singer, Dylan the nostalgic rock n roller, Dylan the traveling bluesman troubadour. Dylan the artist: all the above and so much more.

“Today I’ll stand in faith and raise the voice of praise,

The sun is strong, I’m standing in the light,

I wish to God that it were night…” 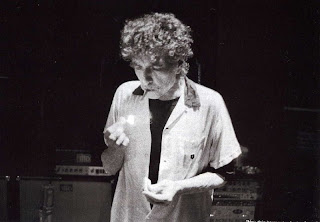 Dylan continues to tour, 100 shows or so a year, still hitting countries he never has before, such as just a few weeks ago when he was in China. He’s still putting out new releases every year, whether it being a studio album, bootleg series archival release or DVD release of some sort. He shows no sign of slowing down or letting the age get to him. He seems to have gotten past that whole “suicide thing,” something he said he was battling with in an interview with Robert Shelton in 1966, and seemed to have snuck back at various times. The drugs, most notably his drug of choice alcohol, doesn’t seem to battle with him, at least in not any losing way, anymore as it did in his marriage-crisis days of the mid-70’s when he continually carried around a bottle of whiskey or the late 80’s when Ronnie Hawkins said “I saw Dylan backstage and it better have been a one off day, because nobody can party like that every night and live.” No, in spirit, Dylan seems to be looking to stay “forever young.” While doing so he’s written songs that, just as his work that focuses on love and loss, topical items and a search for salvation he seems to have found long ago, which all gave us something relevant in our own battles with those things, he has have given us some great insights into getting old in a world that wants to leave you behind. A world that wants to leave you behind yet keeps Dylan the artist relevant. If you don’t believe me, go to a concert of his and explain why the majority of the audience is between the ages of 15 and 35. He’s not just a voice of his generation, he’s the voice of all generations…

All the young men with their young women looking so good,

Well, I’d trade places with any of them in a minute, if I could

The sun is beginning to shine on me,  But it’s not like the sun that used to be

I got new eyes,  Everything looks far away 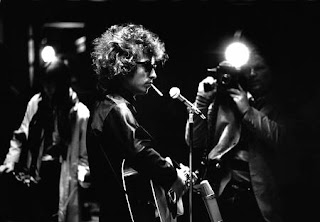