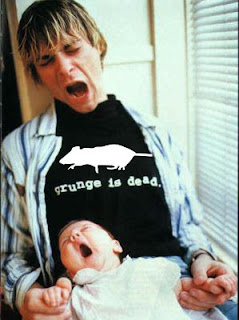 "Who will be the King and Queen of all the outcast teens?"

~lyric outtake from early draft of “Smells like Teen Spirit”~

Let’s imagine for a moment a different timeline of American history. No, not one where Richard Nixon holds the presidency for nearly two decades and superheroes are outlawed…however, that would mean that superhero movies would also be outlawed leading to present day theaters NOT having a piece of rushed out Marvel trash arrive every four months. No, friends, this is a history where singer/songwriter Kurt Cobain lives past the month of April, 1994. We won’t go into whether it was a suicide or murder (I have my own educated opinion and maybe I’ll delve into it another time, not now) that took him, just that it doesn’t. He survives the drugs, the depression, Courtney Love, Pearl Jam pretending to have an artistic rivalry with him. He’s able to go on, Nirvana probably breaks up sometime over the next few months to a year, Kurt takes some time out of the limelight, probably does that Leadbelly cover album he was planning to do next, who really knows. Now, having survived all that, we find ourselves in April of 2011 and the news is Kurt Cobain’s head has literally exploded, brain matter on the wall like a pizza delivery gone awry. Yes, sadly friends, had Kurt Cobain, in our little alternate universe, survived all that, this certainly would have killed him…

I’m a musical elitist, I won’t lie about it, that scene in “High Fidelity” when the father yells at John Cusack and Jack Black for “picking on the un-hip guy” and not letting him buy the (terrible) record he wanted, yeah, that was basically about me. I have rather eclectic tastes in music, but I’m biased and elitist in it nevertheless. You can have your tastes too, but I could probably tell you why they’re wrong, and I’d probably be right about it, at least in my head. That being said, the beauty of music is there’s enough to go around, you can like what you like, and the person next to you can like what he likes. I can be an elitist, you can not give two rats tails about music, and yet we’d probably could still find a song we both like. You can dig Miley Cyrus, if she cuts your mullet, well, that’s groovy. But I can’t condone this performance, I just can’t. I can’t fathom how music has come to the point that Miley Cyrus, who’s all sorts of class (/sarcasm), can cover Nirvana…and get away with it.

I’m not even talking about the fact she opens this up by saying she wants to play a song that influenced her and helped her follow her dream, despite the fact she was born AFTER the song made radio waves. I won’t diss that because, in truth, it’s rather irrelevant. If people didn’t cover songs that came before they were born, some of the best music ever created would never have happened, so I won’t mock her for being influenced by it. Though, every song I’ve heard of hers that my ears have been unfortunate enough to pay attention to says the complete opposite…

No, this is more the fact that, besides the performance of the song (I’ll get to that in a moment), Miley Cyrus represents everything Kurt Cobain so grossly detested about the music business…and live in general really…

K: “We’re not proud of the fact that there are a bunch of Guns N’Roses kids who are into our music. We don’t feel comfortable progressing, playing larger venues.”

C: “We’ve always treated people with that mentality with a little bit of contempt and cynisicm, and to have them screaming for us? Why are they screaming? What do they see in us? They’re exactly the same kind of people who wanted to kick our arse in high school.”

K: “Ninety percent of the kids out there are probably just as into Extreme as they are us.”

Kurt loved pop music (producer Butch Vig once said during the recording of “Nevermind” he found the best way to get Kurt to do something he didn’t want to do was to tell him “Hey man, that’s how the Beatles did it”) but watered down, corporate controlled crappy pop music? Conformity evolved into musical formations? Mainstream fans who are into anything MTV says is good? A dumb whore who’d rather wear as little clothes as possible to get as much attention as possible instead of actually having something relevant to say? Thousands of brain washed idiots willing to scream out every word to a song because the t-shirt they paid $30 for tells them to?

Nirvana became mainstream, whether they wanted to or not, just look at the fifteen year olds walking out of Hot Top in a Nirvana t-shirt (BTW, Thank you HT for selling Nirvana shirts )but the fact remains, they never made music for a Disney made, slut-evolved singer to suddenly pretend to be a rocker for. “Teen Spirit” was never meant to be a revolution, in fact, almost the opposite, as Cobain once said “It’s just making fun of the thought of having a revolution. But it’s a nice thought,” but it WAS a revolution. It changed radio. There’s a reason ‘Nevermind’ doesn’t sound that game changing now, because every alt and grunge rock album for the next ten years did their best to copy that sound. It’s sad what epitomized teen angst and was a radio single revolution for an crowd that felt outside the box in the 1990’s is simple crappy cover fodder for a failed pop star with a banjo twang to her voice in 2011.

Now, her performance? If you’re going to cover Nirvana, you have to do it right. My girlfriend recently showed me a contestant on pop-drivel ‘American Idol’ do “Teen Spirit” and scream their way through it. That’s NOT how it’s done, despite the fact Kurt was a “screamer,” the key to Nirvana’s intensity can be traced to one his biggest influences, the Pixies (on writing “Teen Spirit” Cobain said “I was just trying to rip off my favorite band, Pixies”) which means most songs are two parts build up, one part scream/raw emotion. The screaming works because the build up manifests itself into the pay-off. Also, as a good friend from Australia once said, “Kurt could scream like you were listening to a Beatles chorus/harmony.” Cyrus’ problem with this performance? Well, besides everything it comes off as more like poor-parody than bad-imitation. You’re not going to out-rock Nirvana, The Rolling Stones circa 1969 can’t do it, and this amazingly piss-poor dime a dozen guitarist paid to play EXACTLY like a pre-recorded track certainly isn’t going to get the job done. Cyrus’ voice isn’t exactly a powerhouse to begin with, and here she tries to do her best raspy, gruff voice, especially at the beginning, and it makes you wonder if she’s just making a poor (as well as late) April Fool’s joke.

This isn’t sexist either, chicks can cover “Smells like Teen Spirit,” and make it their own with amazing results. The whole point of this article is when covering an influence, make it your own. Take the emotion that drew you to it in the first place and exploit it. You may fail, and it may suck, but at least you're not another karaoke act...I close with these two examples, first up, we have Kate Bush-wannabe Tori Amos with her piano drenched version. Kurt liked it so much he once said “Tori Amos wrote that song,” and across tours from New Zealand to Japan to America in 1992 it’s a version the band chose to play as opening music before they came on stage. It’s still up for debate if Cobain liked it so much because of the beautiful, emotionally charged performance or if he just liked the fact she sound liked she was constantly in orgasm, but I digress, it’s solid. Also, we have Patti Smith’s very unique take, interesting in that Patti was originally part of the start of the punk scene in the 1970’s, and here she covers grunge with a totally un-grunge, un-punk way…