Up and AT THEM!!!! The Simpsons take a shot at Hollywood 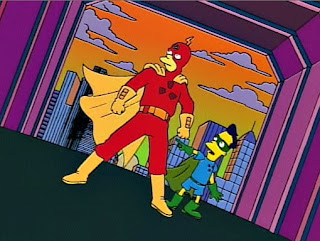 Chalkboard - Bewitched does not support Satanism....nice

Couch Gag - Xerox of family comes up from the couch and floats down....eh ok

Continuing on with our look back at 20+ years of fabulous Simpsons episodes, today we look at Radioactive Man, the story of huge Hollywood blockbuster adaptation of a popular comic book hero coming to film in Springfield. With the recent buzz about TDKR heating up and The Avengers beginning production I felt this was a great episode to look at.

you can totally see "nick" in the background

Putting the family drama to the side for a bit this episode takes a satirical look at the Hollywood studios and how they make their movies. While Bart and Milhouse are perusing the comic book store looking at such gems as "manboy" and "nick" which seems to feature a normal guy with a gaping hole in his chest, they strike up a conversation with Comic Book Guy and discover that a movie is being made from their favorite comic book. Watching Comic Book Guy search the internet using the old alt.xxxx message boards is still great even if the method is outdated it still rings true for the abundance of movie gossip/news sites.(note we don't claim to be a news site...merely opinions) I love that he gets connected to a wide web of nerds only to have someone hiding under the desk at a hollywod meeting overhear the news that Rainier Wolfcastle will be Radioactive Man. This is of course a representation of Hollywoods constant desire to cast big name actors in tentpole films even if the role is wrong for them(see Arnold as Mr Freeze who in NO iteration is a musclebound ex mr. universe....in fact that guy who played Bane in Schumachers Batman and Robin would've been a better fit)

This leads to a great side bit where Rainier, after being trained to speak English properly, has trouble uttering the phrase "Up and atom". 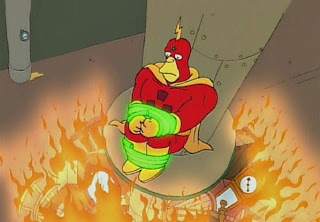 The show continues to satirize the moviemaking industry, from shoddy editors, to behind the scenes magic involving breaking walls for proper wiring, and of course the laziness of the teamsters. Two more things I want to touch on before I wrap this up. My favorite scene in the episode is where they are shooting in a chemical plant and Fallout Boy must save Radioactive Man from a wave of acid. The director yells out that the shot cost millions of dollars and that they only have one take since they are using real acid. Now for anyone who has seen behind the scenes extras on big budget movies knows this is relatively true. Aside from using real acid these big budget films have shots that cost exorbitant amounts of money and because of that they essentially only have one chance to get it right. This scene as we all know ends with Rainier being whisked away in the acid screaming the classic "My Eyes!...The goggles do nothing!" 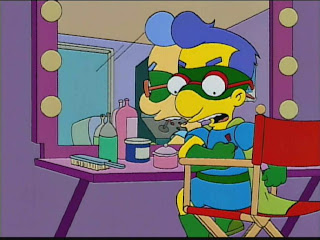 The last thing I want to talk about is Milhouse. The producers of the Simpsons like to paint Milhouse as a little wimpy kid with no backbone for the majority of the series. Every once in awhile we see that Milhouse has his own opinions and desires like anyone else. Here he really shines, unhappy about being forced into acting he runs away from the production. He gives a long speech to Bart about how the real heroes are doctors and teachers and he feels so phony dressed up pretending to be a hero. They may be rare but when Milhouse shines he is a voice of reason not often heard outside of Lisa.

One last thought - do you know how long it took me to notice the Mickey Rooney joke about box office dominance spanning two decades?