Scorpio, You are Totally Mad or the Simpsons as a Conventional American Family

"You Only Move Twice," a Simpsons retrospective (or reminiscence) part Two: 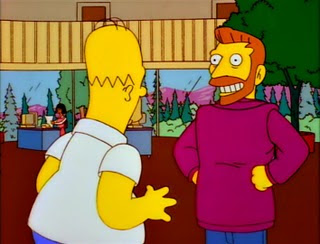 Culturally speaking, it is difficult or nigh impossible to find a show that has altered the landscape that is the American family. George Bush (Senior not Junior) missed the point behind the Simpsons. Are they dysfunctional? Perhaps but then again what family is truly well adjusted? The appeal of the Simpsons besides the inherent wit and intelligence in the writing is that the viewer can relate to elements of this television family. You have the loving father but dimwitted father (Homer), the glue behind the family (Marge), the intelligent overachieving sibling (Lisa), the rascal or troublemaker (Bart) and the baby with a personality of her own (Maggie). There's is the life of the everyman, which we the mass live day in and day out.

With four hundred and eighty-six episodes to select from, there is many adventures of this family that reside deep within my heart but when pressed with the question, "which is your favorite episode?" The answer remains ever the same, "You Only Move Twice." Talk about clever, you know where the episode is going to go by the title alone (For those keeping score, it is a play on the Bond film, "You Only Live Twice). Couple it beginning with the funniest line/gag (Smithers annoyance to being offered a job... "What's wrong with this country? Can't a man walk down the street without being offered a job?") in the twenty-two year history of the show and you got yourself a stew going.

For those who missed this gem and you should be ashamed of yourselves. Smithers rebukes the Globex Corporation's offer of a job and they go to the next senior member of the nuclear plant, Homer Simpson. The Simpsons move to Cypress Creek, where Homer works for a supportive and altogether nice guy by the name of Hank Scorpio. In this environment, Homer flourishes for the first time in his life and shows glimpses of a positive self-esteem. The rest of the family however is far from happy, Marge turns to drinking wine because she has nothing to do, Lisa develops a nasty cause of allergies to everything in Cypress Creek and Bart is placed in a class with "arsonists and kids with mittens pinned to their jackets all year 'round." In short, the family would like to return to Springfield.

To which Homer replies ignorant to the fact that Hank Scorpio is a supervillain (forgot to mention that fact):

Posted by Manfred "Manny" Funkowitz at 12:18 AM